Harlem for the Holidays: "Black Nativity" uneven but earnest and passionate Yuletide fare 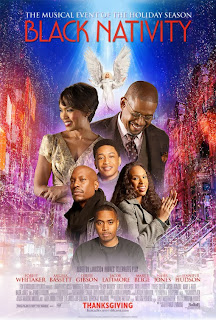 Corny. Preachy. Schmaltzy. Heavy-handed. The cynic in anybody could pick any or all of those identifiers to describe bits and pieces of "Black Nativity," and yet this Christmas fable so earnestly wears its positive heart, religious faith, and celebration of song on its sleeve that it's easier to let the flaws slide and just succumb. Giving Jennifer Hudson plenty of tunes to carry and getting actors like Forest Whitaker and Angela Bassett aboard are also huge pluses. A contemporary, urban-set adaptation of poet/playwright Langston Hughes' 1961 Gospel libretto, "Black Nativity" is a flimsy and uneven but well-intentioned and passionately made effort from writer-director Kasi Lemmons (the "The Silence of the Lambs"/"Candyman" actress who went on to make 1997's "Eve's Bayou" and 2007's "Talk to Me"). Even when the film tries to mesh too many things without much subtlety—oh, and by the way, it's a musical extravaganza—and doesn't always ring true in its scenes of poverty and redemption, the film has enough joyous and sincere moments to count as chicken soup for the holiday-happy soul.

For fifteen years, single mother Naima (Jennifer Hudson) hasn't spoken to her parents after a falling-out, raising her 15-year-old son in Baltimore since her baby daddy left them. The unruly Langston (Jacob Latimore), named after the poet, has tried staying out of trouble, as his mother was laid off from her city job and tends bar to make end's meet. Facing eviction, Naima decides to send her son to Harlem to spend Christmas with his grandparents, whom he's never met, while she works over the holidays. Upon his arrival in Times Square, Langston is immediately robbed of his backpack and then lands in jail after an act of kindness is mistaken for pickpocketing. Reverend Cornell (Forest Whitaker) and Aretha Cobbs (Angela Bassett) eventually welcome their grandson to their brownstone, while Langston, himself, is resistant and eager to find $5,000, even if that means attempting to sell his grandfather's prized possession, so he and his mother won't be evicted. Fortunately, the reverend's annual Christmas Eve show, Black Nativity, brings out the best in everyone and might beget reconciliation between daughter and parents.

With characters dancing around their history (which isn't that big of a family secret) and musical interludes stopping and starting, "Black Nativity" shouldn't work at all as an adapted work for the screen, but, holy Christmas, it's a nice, forgivably sweet film. Set in a warmly lit, PG-rated New York City, where unkempt homeless people aren't even visible on the sidewalks, the film is conceived more as a fable than anything gritty. It doesn't get too bogged down in melodrama that can't be resolved by the trite climactic Black Nativity pageant and a triumphant musical finale of "Be Grateful." Mid-sermon, familial wounds are brought to the forefront and mended right in front of a packed church congregation as a big confrontation, but all the way around, the appealing ensemble is reliably solid and roots the magical-realism in real emotion. After her heartache-filled debut in "Dreamgirls," Jennifer Hudson is a blank here as the financially and emotionally struggling Naima. At times, she's directed to do some overbearing caterwauling, but since belting one out is her genuine talent, she does get to soulfully break out into song more than once. Coming in with a singing and dancing background, acting newcomer Jacob Latimore holds the screen as the troubled but sympathetic Langston and decidedly soars in the musical numbers, especially the stirring "Motherless Child" when Naima sees him off on the bus to NYC. As the grandparents, Forest Whitaker might come off too sternly stilted without so much as a smile as the righteous reverend, but there's always an aching sense of broken-hearted feeling behind his eyes, while Angela Bassett is radiant as ever, initially fluttery and over-eager and always kindly understanding. Also, Tyrese Gibson is here, playing a pawnshop employee who initially antagonizes Langston in the slammer, and shows the impressive dramatic chops he hasn't shown since the early and mid-2000s.

There is a very fine line between a big-screen musical that is so bad it's good, and one that's actually good, and "Black Nativity" hugs it. Mixing spiritual, rap, hip-hop, and R&B, all of the songs are on the same level, their sorrowful lyrics about hard times and emotional expression, and none of them all that remarkable, the only show-stopper being "Hush Child (Get You Through This Silent Night)." Lemmons' decision to shoot some of the songs in motion are more successful than having actors stand in one spot, like when Hudson waves her arms around outside of her foreclosed home. Then, take the dream sequence where Langston falls asleep in a pew during his grandfather's Christmas show. He envisions the traditional Nativity story, complete with camels, in Times Square; a pregnant street couple (Grace Gibson and Luke James) symbolize Mary and Joseph and give birth to their baby (Jesus); and then the congregation synchronizes a song-and-dance number to "Rise Up Shepherd and Follow" in front of a white-afroed angel (a barely used Mary J. Blige). It's theatrical, campy staging without being too flashy, but there's something glorious and infectious about filmmaker Lemmons just swinging for the fences.

With the second most recent "The Best Man Holiday" and "Tyler Perry's A Madea Christmas" rolling out closer to the holidays, how interesting that the only mainstream Christmas movies hitting this year are being headlined by predominantly black casts. If there's one commonality between Lemmons' more ambitious vision and any like-minded Tyler Perry movie, it's in its pushy, moralizing message that life's problems can be fixed by just going to church, and on Christmas no less because that's when miracles happen. The difference here is that all the characters are at fault for their estrangement, realizing the error of their ways, and the tears are actually dramatically earned. "Black Nativity" won't go down as some musical event as hoped, but it's one of those holiday specials that would fit right in with ABC Family's "25 Days of Christmas." 'Tis the season to be in the comfort of your own home.