Reunion at a Funeral: Cast does most of the work in pleasant "This Is Where I Leave You" 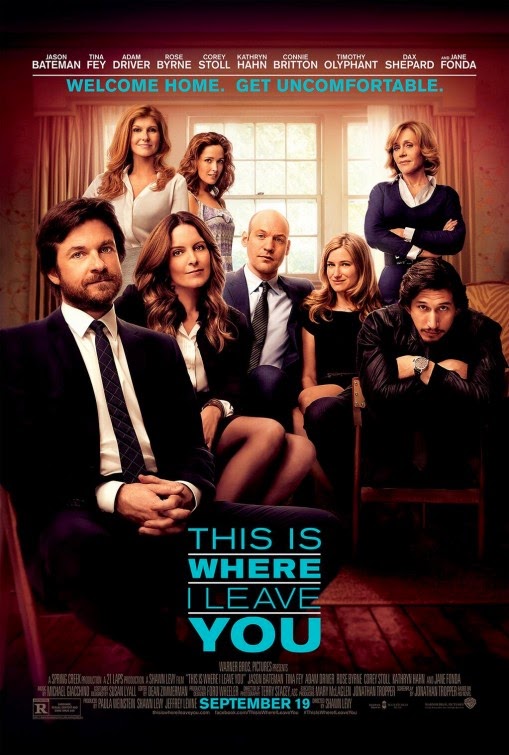 As a narratively tidy, tonally messy slice-of-life dramedy, "This Is Where I Leave You" passes or fails an easy litmus test — you either forgive its missteps and fall for its successes, or you can call b.s. on the whole thing. Adapted for the screen by Jonathan Tropper from his own well-received 2009 bestseller, the film has one big draw in the form of seeing one of the most appealing ensemble line-ups and getting them all in the same room, literally. From his spotty track record of broad, shticky comedies ("Just Married," "The Pink Panther," "Night at the Museum" and "The Internship"), director Shawn Levy is not a man of nuance and doesn't seem to be the right choice for a seamless give-and-take between family drama and humor. Luckily, he either pulls some good performances from his actors or they pull them out all on their own. Take it as a more enjoyably benign and less demanding version of "August: Osage County," and you'll get along fine.

Radio producer Judd Altman (Jason Bateman) is having a crisis-filled day. When he brings home a birthday cake to wife Quinn (Abigail Spencer), he walks in on her with his jackass shock-jock boss (Dax Shepard), whom she's been sleeping with for a year. After that revelation, he leaves his job and then gets a call that his father has passed away. When the Altman siblings must come together for their father's funeral and comfort now-widowed mother Hillary (Jane Fonda), a psychologist and writer not afraid to talk about sex with her children around, they all return to the old homestead in Upstate New York. While Judd tries to keep his looming divorce hush hush, everyone else arrives with their own baggage: the no-nonsense eldest, Paul (Corey Stoll), is the only one who has stayed in town to take over the family store and has been trying to conceive a child with wife Annie (Kathryn Hahn) for too long; sarcastic sister Wendy (Tina Fey) is a mother of two and the wife to a rich suit of a husband who cares more about work than family; and baby brother Phillip (Adam Driver) is a perpetual screw-up and brings along his latest girlfriend Tracy (Connie Britton), an older woman and his therapist who might be too mature and successful for him. Meanwhile, Judd runs into local woman Penny (Rose Byrne) who still has eyes for Judd and Wendy reconnects with Horry (Timothy Olyphant), her old fame who still lives across the street with his mother due to a brain injury. If that doesn't already sound like enough dysfunction, Hillary tells her children that it was their father's final request to have them all sit Shiva for seven days and sort through their problems under one roof again.

As a byproduct of there being so many characters to juggle and the source material's author writing the script, "This Is Where I Leave You" often feels overcrowded and only partially formed with certain characterizations and all the subplots it traffics in and then only skims. In helming this dramatic comedy, director Shawn Levy doesn't always get the mixture right, either, overstating an annoying running joke with a rabbi's (Ben Schwartz) old "Boner" nickname when the scene rarely calls for it or treating a secret belonging to Linda (a lovely Debra Monk), the Altmans' family friend/Horry's mother, like a contrived 11th-hour plot reveal. Noticeably, there are two scenes—a mere five-person conversational scene in a bar and a brawl among brothers on the front lawn that could be given more slack because it's almost right out of a screwball comedy—that are so frantically cut like a pinball game the film could induce whiplash. When Levy cools it with the preponderance of easy sitcom-style laughs—i.e. Wendy's toddler son's potty training regimen; a baby monitor is left on upstairs during an extension of their father's wake, only for everyone to hear an ovulating Alice and Paul getting it on—the film counters those wedged-in bits with snappy, jabby exchanges and cutting truths. The more touching moments are less surface-level when they aren't so pushy and actually find subtle, genuine feeling, such as a scene where Judd and Phillip get high in a classroom of a the synagogue and reminisce how their father showed love in his own way, or the couple of times Judd and Wendy have heart-to-heart talks on the roof.

Initially, it's hard to buy all of these cast members as one big family, let alone a family whose patriarch was a Jewish atheist—and from one throwaway line, one who celebrated Christmas—but they all pitch in to make it work and gel as a likable familial unit with simpatico chemistry. Of course, a strong cast can only be as strong as what is written for them and, thus, the majority of them are given more chances to bring depth to these characters than others. As cleavage-showing, over-sharing matriarch Hillary, Jane Fonda never lets any of the breast-implant jokes get her down and brings a warmth and humor to the role, but a nearly better-than-ever Jason Bateman is the rock a movie like this needs. As Judd, he essays a man who has seemingly lost everything in one fell swoop and needs some family time to do his soul-searching. Tina Fey is pretty terrific as sister Wendy, hitting notes of truth and making good with her organically quick wit. Her easygoing one-on-one scenes with Bateman, as well as Adam Driver, connect the most. Driver, himself, seems typecast by now as youngest sibling Phillip, a man who's still a boy, but he's a livewire performer who lends an off-kilter appeal and unpredictability every which way. Corey Stoll, an actor with actual gravitas, is given more time to rage and let loose than dig into much meat as the cold, serious Paul, who realizes he was never any fun.

It seems the hilarious Kathryn Hahn would turn in more dramatic work, and she earns some of it to herself, but a scene where her Alice puts the moves on an ex-lover in the Altman family that isn't Paul seems like something from her "Step Brothers" shtick routine. Connie Britton is left with little to do as Phillip's older girlfriend, but she approaches this superfluous role with authenticity when given the chance, particularly in her second-to-last scene when she reconsiders what she's even doing with an irresponsible younger man. There is also very little to Penny, "The Girl That Never Left" who puts the "manic" in "Manic Pixie Dream Girl" and runs the local ice skating rink but is never seen teaching a single class. Rose Byrne's character is just an idea, but she infuses such an unchallenging part with her wonderful adorability. Finally, in an awkward place as the always-confused Horry, Timothy Olyphant still brings a sensitivity to a literally handicapped role that feels shortchanged.

Oftentimes, mainstream movies pride themselves on being messy and complicated like real life by having their characters say pat platitudes about life being, well, messy and complicated, invalidating its intentions by being too neat and on-the-nose. There's no way around it: "This Is Where I Leave You" is one of those facile crowd-pleasers rather than a weighty think piece, but it also enables the viewer to put on their blinders, shake out the film's false notes and allow it to hit a sweet spot that feels closer to home than manufactured Hollywood domain. And, with so many likable actors assembled to make up a dream cast, it's hard to complain when the blips of laughter and pathos seem like all their doing.