A Nightmare in Eel Marsh: "Woman in Black 2" tries to jolt but never truly haunts 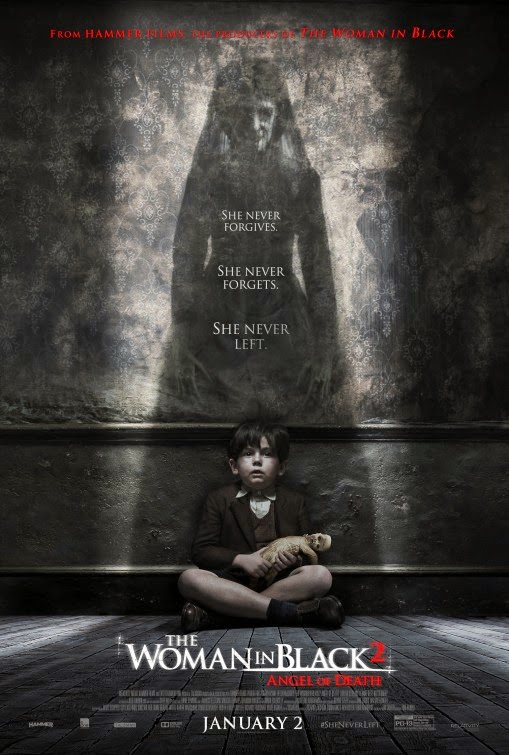 It would play like a maniacal laugh in the face of everyone's expectations if "The Woman in Black 2: Angel of Death" actually captured the same spooky, atmospheric alchemy as 2012's "The Woman in Black" without feeling like a familiar retread. Being the guinea pig for a generally quality-deficient calendar month and existing as a horror sequel—not to mention a horror sequel with an uninspired title—this follow-up isn't so bad so much as it's just so-so. Produced again by the revamped Hammer Films production company, "The Woman in Black 2: Angel of Death" is nevertheless handsomely mounted and rich in the fog department, but in terms of clammy dread and veritable frights, it's darkened by the shadow of its superior predecessor. Whereas the first had an emotional throughline and knew just when to time its shock-effect jolts, sometimes on the off beats, the second resorts to done-to-death histrionics again and again, doing a disservice to the characters and dramatic core of the story.

As the World War II bombings devastate London in 1941, sweet and caring schoolteacher Eve Parkins (Phoebe Fox) and stern headmistress Jean Hogg (Helen McCrory) lead a group of children to safety in the countryside. A doctor drops them off on the barren island village of Crythin Gifford for shelter in the derelict Eel Marsh House estate, separated by the marshland. Eve takes an interest in consoling one student, Edward (Oaklee Pendergast), who has just recently become an orphan and only communicates with a pencil and paper. Soon enough, the conditions become foggy with a chance of murder once Jennet Humfrye (Leanne Best), the woman in black, slowly makes her presence known and puts her home's inhabitants in peril, namely the children. Can Eve, as well as flirtatious pilot Harry (Jeremy Levine), put aside the haunting of their own personal secrets to save the children?

Directed by Tom Harper from a screenplay by Jon Croker, based on a story by Susan Hill, "The Woman in Black 2: Angel of Death," like the James Watkins-helmed predecessor, does a fine job of setting a fog-laden atmosphere in the same spooky house from twenty years prior. It also continues filling in the backstory of Jennet Humfrye, the titular antagonist who hung herself due to the death of her son and has haunted the Eel Marsh House ever since. Even to this film's credit, the WWII backdrop adds interest and disables the storytelling from spinning its wheels too much, and, like the first film's protagonist portrayed by Daniel Radcliffe, all of the characters here expose their fears and have experienced loss before even entering the haunted house. All of that aside, however, the film continually sells itself short, falling back on the cheap, easy route of horror. "Jump scares or bust" must have become the commercially driven technique of choice. Each of the scare sequences might keep the viewer from nodding off from being accompanied by eardrum-rupturing screeches on the soundtrack, just in case, you know, we miss the "boo!" cue. Alas, such an onslaught grows tiresome and humdrum after a while that one could set his or her watch to every wannabe scare. Sure, a corpsy hand slithering down Eve's shoulder is creepy in its restraint and the specter's screaming face popping up elicits a squeal, but tacked-on false alarms with crows flying into windows and bells ringing are just pushing it to rightfully deserve ridicule.

With Daniel Radcliffe out of the picture, stage-trained actress Phoebe Fox does her best in shouldering the proceedings, being given more substance than the usual horror-movie ingenue. As kindly schoolmarm Eve, who smiles as a way of coping for her painful past, Fox comes into her own and makes her personal loss palpable enough. Jeremy Irvine (2011's "War Horse") is adequate, too, looking the part of a wartime hero as cowardly pilot Harry, but the treatment of the character is often laughably hokey, allowing him to always arrive at a time of convenience for Eve. Also, Helen McCrory (TV's "Penny Dreadful") brings a few more layers to her role of the rigid headmistress, and while understandably passive as the mute, newly orphaned Edward, Oaklee Pendergast (2012's "The Impossible") is sympathetic without saying a word. Once again, even beating out Leanne Best as the titular woman in black, the standout star is the creepily antique production design of Eel Marsh. It is above-average and has been handled with care, as is cinematographer George Still's chilling photography of the marshlands, but both deserve to shine in a film that isn't so average.

Too competently made from a production standpoint to dislike, "The Woman in Black 2: Angel of Death" is still too full of contradictory feelings to recommend. When director Harper does execute a few effective shocks, it's all the more disheartening when the next one is so lazily telegraphed and unnecessary. A glimpse of the shadowy ghoul and her pasty-white face in the background is admittedly shiver-inducing, especially in one moment where she watches Edward asleep in his bed. When the overtly CG-enhanced woman in black crawls out from a hole in the ceiling or pops into frame via close-up, the effect detracts from the old-fashioned approach that tries going in step with the Hammer films of yore. For PG-13 releases, both "Woman in Black" films have the macabre audacity to play with the lifelines of innocent children. Then again, as there was closure in the narrative three years ago, "The Woman in Black 2: Angel of Death" is open-ended in the most frustrating of ways, the faux-happy non-ending rendering the woman in black's motivations null and void. Is she just toying with our heroes, giving them just a scintilla of confidence to think they defeated her? If the woman in black wants to continue haunting "ye who enters," she better come with more rules and better scares. Move along; you've been goosed before and better.