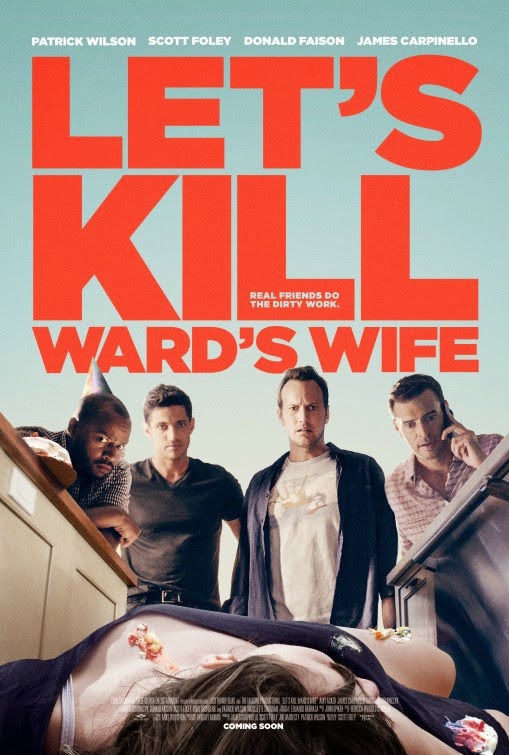 Somewhere in between "Horrible Bosses" and "Very Bad Things" lies "Let's Kill Ward's Wife," a slight but mildly morbid and wryly twisted indie black comedy that marks the writing-directing debut of actor Scott Foley (who also stars). Taking into account that a "getting away with murder" premise has been done before—Danny DeVito has been around these parts before with "Throw Momma from the Train," "Death to Smoochy" and "Duplex"—the film more often than not hits the bull's-eye with its specific tone, being low-key and very cavalier when getting its laughs. It's as amusing as a film can be about dismembering a dead body and bleaching the limbs.

Henpecked journalist Ward (Donald Faison) hates his overbearing, emasculating wife Stacy (Dagmara Dominczyk) with whom he shares their first and only son. Married to stay-at-home mom Geena (Amy Acker), his levelheaded co-worker Tom (Scott Foley) puts together a 3 p.m. tee time on Father's Day with Ward and their two buddies of twenty years, uninspired TV actor David (Patrick Wilson) who shares a daughter with separated wife Amanda (Marika Dominczyk), and crude-mouthed bachelor/personal trainer Ronnie (James Carpinello), but at the last minute, Ward bails on them, all because of Stacy guilt-tripping him. Taking a break from golf, the other three buddies joke about mercy killing Ward's wife, and the conversation continues. At Ward and Stacy's son's birthday party, Tom steps away to take a seemingly adulterous call from one of his article subjects, a cougar actress (Nicollette Sheridan), Stacy walks in and antagonizes him. Enraged, Tom pushes Stacy's face into the birthday cake and she slips to her death, only Tom has something to do with finishing her off. Will anyone care that she's gone? How will they dispose of the body with cop neighbor Bruce (Greg Grunberg), who desperately wants to play golf with the guys, snooping around?

With "Let's Kill Ward's Wife," the joke is that everyone is so nonchalant about Ward's wife being murdered and completely in with getting rid of the evidence. Tom casually apologizes to Ward, "Hey man, I'm really sorry I killed your wife." Also, as everyone comes together, the death of Ward's wife quickly fixes marriages and tightens friendships. The characters are all recognizable privileged types, but they are all grounded enough to feel like real people with jobs and real lives, aside from the one exception. On the other end of the spectrum is Ward's wife Stacy, who's a monstrously one-note man-trap held in contempt—she constantly shushes, curses and hounds her husband—until she's killed on the kitchen floor. Those who will find this small misogynistic streak too off-putting are best to take it with a grain of salt.

The talent involved is like a little family. Writer-director-actor Scott Foley (TV's "Scandal") directs his brother-in-law Patrick Wilson, Wilson's wife Dagmara Dominczyk, his own wife (Marika Dominczyk), his friend James Carpinello, Carpinello's real-life wife Amy Acker, and the third Dominczyk sister (Veronika) in a bit role. Foley and a loose Wilson lead the pack as Tom and David, who would be psychopaths if they weren't family men. Donald Faison is less overstated than usual as Ward, the victim of his wife's ball-busting who can finally breathe as a single dad, and James Carpinello's Ronnie gets to change in unexpected ways, being the one as the voice of reason with the most regrets. As Geena, who's happy to see her sex life improving after Tom goes through with murder, Amy Acker is a sneaky delight, commenting on Amanda's hair as they all stand above Stacy's cake-covered dead body in the kitchen. Dagmara Dominczyk is in the toughest spot with an unrewarding role, but she's game to play Stacy, the insufferably bitchy ball-buster nobody minds being gone.

Mean but unusually likable, "Let's Kill Ward's Wife" is, for the lack of a better word, a pleasant surprise. It might not be the most believable film in the world, as everything seems overly conclusive and tidily resolved, but the writing is clever and mostly consistent, and the cast carries the day. Foley has a restrained directorial style, which helps in nailing the well-pitched tone, and there are more than enough giggles to be had in this darkly comic situation. Getting away with a cheerily black-as-death comedy never looked so easy.