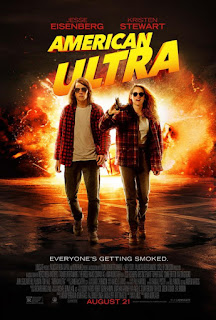 Juggling comedy and violence is a tricky tone to master, and by now, the premise of an everyman realizing he is special or extraordinary in some way—like being a superhuman CIA agent—is nothing new if you've heard of anything with "Bourne" in the title. Part stoner relationship comedy, part ultra-violent action-thriller, and altogether a cult favorite in the making, "American Ultra" defies the odds of experimenting with whiplash-inducing tonal shifts that don't displace each other or become disingenuous but merely add off-the-wall personality to an enjoyably buzzy whole. Consider it a bit of a pleasant surprise, particularly at the end of August, when director Nima Nourizadeh (2012's "Project X") and screenwriter Max Landis (2012's "Chronicle") team up for a gleefully subversive mishmash that might not always be smooth sailing, but at least it's wildly different and never entirely foreseeable.

Amiable toker Mike Howell (Jesse Eisenberg) lives in a sleepy West Virginia town with patient girlfriend Phoebe (Kristen Stewart). When he's not hanging out with her, Mike is cartooning his space-monkey comic character when working at the local market that doesn't seem to bring in any customers, but his anxiety and panic attacks prevent him from proposing to Phoebe, so much in fact that he's forced to call off their trip to Hawaii. During his night shift at work, sunglasses-wearing CIA agent Victoria Lasseter (Connie Britton) comes to Mike at his register and speaks gibberish: "Cherry Progressive, listen. Mandelbrot set is in motion. Echo Choir has been breached." Mike has no idea what she's talking about, but as it turns out, he is a highly-trained CIA operative who call kill bad guys with a spoon and Victoria is activating Mike from an abandoned government program. Mike would rather just live his uneventful life with Phoebe, but they are both thrust into the middle of a conflict between Victoria and her rival superior, Adrian Yates (Topher Grace).

Fearlessly darting from goons being stabbed with a spoon and dustpan in the jugular, to our stoner protagonist never knowing the appropriate time to propose to his stoner girlfriend, "American Ultra" is undeniably schizophrenic in tone. However, because it feels like three movies stitched together, there is a sheer inspiration—and oddball charm—to the inherent incompatibility of it all. It is appreciative that the pot-smoking humor never becomes a driving force. The two leads just happen to like getting high, but being dazed and confused is just one of their pastimes; it doesn't define them. From the first time Mike realizes he's been living stealthily as a killing machine, a sequence in the parking lot of his work is brutal and outrageous, as his weapon of choice is a spoon from the cup of noodles he's eating. Followed by that is an intense, no-holds-barred massacre inside a police station with the ironic use of a doo-wop soundtrack an inspired touch, but at the top of the skillfully mounted sequences is Mike taking out Yates' evil assets with a bag of frozen hamburger patties in a big-box store, a grindhouse pic-level fight played out in one extended take. Other cool, offbeat details include an attention-getting, frenetically cut rewind that opens the story and still doesn't drain the suspense in the outcome; the setting of a black-light basement in the pad of Mike's drug dealer Rose (John Leguizamo) that makes Mike and Phoebe almost look like zombies; and a bloody romantic proposal that ends in both lovers being tasered.

Prone to playing intelligent, neurotic types, Jesse Eisenberg gets to loosen up a bit, and he's really no less believable or endearing as an obtuse, unassuming stoner who's a self-confessed screw-up with the same physical abilities as amnesiac CIA operative Jason Bourne. Since she has come into her own and reinvented herself beyond the "Twilight" series with her impressive work in "Still Alice" and "Clouds of Sils Maria," Kristen Stewart is a sweet and edgy foil for Eisenberg, bringing humor as the voice of reason and palpable feeling to the girlfriend-with-a-secret role. With the two actors reuniting for the first time since 2009's "Adventureland," Mike and Phoebe's gentle relationship becomes the heart beneath the absurdly ridiculous story and extreme violence. Early on, while the couple gets high on top of their car hood, Mike spots a car accident in the distance and equates himself to the tree that stops the car, as if he is preventing Phoebe from living and she is too good for him. It's an unsuspectingly affecting moment, and really, it's no stretch that Eisenberg and Stewart's Mike and Phoebe are very much in love.

Taking itself seriously but still allowing the viewer to laugh like a hyena at the lunacy on display, "American Ultra" is fierce and darkly fun with a go-for-broke attitude. Eisenberg and Stewart's Mike and Phoebe create a genuine sweetness, too, that makes a film with blood splattering from all ends weirdly romantic and likable. If the film must meander from its focus at all, it's in the service of an enthusiastic supporting cast. Connie Britton is laudably game, equally warm and comedically prickly as Mike's rogue handler Victoria, while Topher Grace gets to play against his starry likability as her hateful foreman. As CIA desk jockey Petey, Tony Hale amuses, basically reprising his role of loyal assistant Gary in HBO's "Veep," and it's a nice touch to see his character in a same-sex relationship that doesn't become a punchline. John Leguizamo tries with all his might to add color and gusto to the stereotypical part of a drug dealer named Rose, and Walton Goggins is lunatic and a little more complicated than the cackling maniac he lets on as Laugher, one of the assets sent to kill Mike. "American Ultra" can't quite compare to "True Romance," but yours truly will take this demented oddity over "Pineapple Express" any day.