The Man and the Sea: "Manchester by the Sea" expertly acted and quietly aching on a human scale 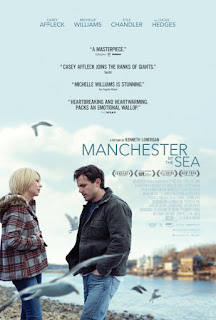 Absent the superlative level of the performances and the pangs of truth, “Manchester by the Sea” could have gone wrong. It could have threatened to become melodramatic artifice or a heavy, funeral slog, but playwright-turned-filmmaker Kenneth Lonergan—this being only his third film after 2000’s “You Can Count on Me” and 2012’s “Margaret”—knows better, handling a story about guardianship, guilt, and the ways in which we all grieve and communicate differently on a small, human scale. For a film as aching and expertly performed as “Manchester by the Sea” to work, it’s not only a testament to the performances, but what’s there on the page. What Lonergan has written never tells the viewer how to think or feel, although it definitely allows them to think and feel.

Still reeling from a personal tragedy, Boston janitor and handyman Lee Chandler (Casey Affleck) lives a solitary life and just tries to get through each day. When he gets a call from “home”—the seaside fishing town of Manchester-by-the-Sea, Massachusetts—his older brother Joe (Kyle Chandler) has been hospitalized for congestive heart failure. Upon Lee’s arrival after a long drive, Joe has passed away, leaving behind a 16-year-old son, Patrick (Lucas Hedges). That leaves Lee to arrange the funeral and attend the affairs of his late brother, including deciding on what to do with Joe’s boat and taking care of his teenage nephew for whom he has been named guardian in Joe’s will. As he moves into Joe and Patrick’s home, Lee is soon haunted by what forced him out of this town in the first place.

“Manchester by the Sea” takes its unforced time to get where it’s going, yet makes nary a moment feel extraneous. Without notice, the film freely weaves in and out of Lee’s memories, bringing dimension to Lee and illuminating how he became who he is in the present. We see how good of a man Lee was before a terrible house fire that reduced him to a hollow shell of a human being. It isn’t a mystery, but in dribs and drabs, one immediately becomes invested in Lee and hopes the best for him. In a way, writer-director Kenneth Lonergan explores communication between men, whether it’s between brothers or an uncle and nephew when both enter the grieving process. There is a welcome dose of humor that organically springs from the characters in their Bostonian, F-bomb-ridden banter and Patrick’s cocky behavior in which he juggles two girlfriends.

Casey Affleck is exceptional, carrying the weight of the film, full body and soul, as Lee. In what might be the actor’s most accomplished work since 2007’s “Gone Baby Gone” and “The Assassination of Jesse James by the Coward Robert Ford,” as well as an impressively internal performance that could have given in to showy histrionics, he vividly actualizes this broken man with an almost unconscionable amount of bottled-up guilt and simmering rage for one person. If that makes it sound like no one in the cast measures up to Affleck, that surely isn’t the case, as there are no weak links to be found. Lucas Hedges (2014’s “Kill the Messenger”) is an unaffected natural, acting as a real teenage boy does, and holds his own against Affleck. The impossibly excellent Michelle Williams doesn’t have a lot of scenes, but she conveys so much in a seemingly small part as Randi, Lee’s ex-wife. She makes such a deep impression, particularly in one devastating key moment and an affecting, concisely written scene when the re-married Randi tries to resolve relations with Lee. In the latter, Williams breaks the viewer’s heart, her voice cracking with a hope for reconciliation and her body language doing all of the talking. Rounding out the supporting cast is Kyle Chandler, seen only in flashbacks, as Lee’s brother Joe (whose last name also happens to be Chandler); Gretchen Mol, as Joe’s ex-wife Elise; and Matthew Broderick, in one scene, as Elise’s second husband Jeffrey, an evangelical Christian.

A wise, insightful and heartrending slice-of-life that traverses loss, “Manchester by the Sea” resonates. Kenneth Lonergan doesn’t go after big, overstated moments with exclamation points but rather handles everything with grace, naturalism and profundity. As befits specific kinds of stories, not every film needs to visually “wow” audiences. With that said, cinematographer Jody Lee Lipes lends a delicate touch to each frame, while Lonergan finds a rich sense of place with the working-class Massachusetts milieu feeling lived-in and textured. While the film doesn’t subjectively hit quite as hard emotionally as other films exploring the same subject matter have, it is quietly powerful all the same. Too much of a catharsis might have seemed phony. Instead, there is no happy ending, just the hopeful chance for a new beginning.
Grade: B +