Step Up with LSD: "Climax" off-putting but intoxicating and unforgettable 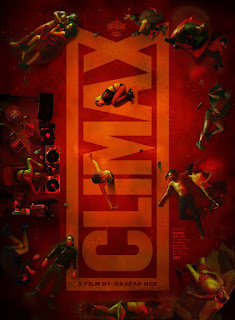 Not afraid of stirring up controversy, pushing limits, or daring audiences to walk out in disgust, iconoclastic writer-director Gaspar Noé (2015’s “Love”) runs with his artistic freedom, specializing in swirling, disorienting camerawork; graphic sex, violence and drug use; and just a general unsparing, rule-breaking danger. With his latest insane, French-and-proud-of-it provocation “Climax”—Noé’s fifth feature in twenty years—all those elements are here, plus the art of dance, and already baked into Noé’s adventurous modus operandi of filmmaking, so all naysayers need not apply. Inspiring ambivalence, “Climax” is alternately an anxiety-ridden endurance test and pure art-house cinema: it’s exasperating and off-putting, confrontational and self-indulgent, and daring and transfixing. There really is no way to passively watch a film like this, as Gaspar Noé might as well be saying, “You’ve seen nothing yet.”

It’s 1996 and a French dance troupe made up of twentysomethings from all over the world is about to tour America. They’ve been rehearsing for three days in a former boarding school and now they’re ready to imbibe and party after their last rehearsal. Choreographer Selva (Sofia Boutella) is flirting with “walking STD” dancer David (Romain Guillermic), who’s not done sleeping with all of the female dancers; Taylor (Taylor Kastle) does not approve of his sister Gazelle’s (Giselle Palmer) boyfriend Omar (Adrien Sissoko); lesbian lovers Psyche (Thea Carla Schott) and Ivana (Sharleen Temple) are having trouble in paradise; Lou (Souheila Yacoub) isn't drinking because she's pregnant yet hasn’t told anyone; and the creative leader, Emmanuelle (Claude Gajan Maull), has her young son Tito (Vince Galliot Cumant) with her before putting him to bed. When Selva is the first to not feel well and then one of the dancers empties her bladder right on the dance floor, it seems someone has spiked the communal bowl of sangria with a potent batch of LSD, resulting in a violently paranoid mob mentality, guttural screaming and crying, and hedonistic-turned-bestial impulses that run rampant.

“Climax” begins with a bird’s-eye view of a woman stumbling through a blanket of snow, until she collapses. She starts making a snow angel, blending the white snow with crimson red from her blood-covered body and then proceeding to scream and crawl. Presumably, this woman is the possible survivor of a harrowing situation, and then, like Gaspar Noé’s other works, the end credits roll as if we have already watched the film, coupled with a text reading that the film was based upon a true event in 1996. Then we are introduced to the many members—maybe twenty or so—of the dance troupe through a playback of their talking-head auditions on an old TV. Surrounding the boxy TV are books and VHS tapes of Dario Argento’s “Suspiria,” Andrzej Zulawski’s “Possession,” Lucio Fulci’s “Zombie,” and many more of Noé's influences. The first dance sequence, set to Cerrone's disco-electronic "Supernature" and mastered in a single take, is electrifying and and breathtakingly staged as the dancers krump, vogue, bone break and flex, and sensuously slide across the floor, and it will easily end up being one of the most rewatchable cinematic moments this year. Before the LSD kicks in, there’s a ten-odd-minute patience-test of the characters, usually two together in the frame, sharing petty gossip, making confessions, and crudely talking about sex, as if to get a sense of who these people are beyond their shared talent. As “Climax” pulses along without an escape, watching it is like being the only sober one at a party where everyone else is in an altered state; in a way, the film is not outwardly trippy as much as the viewer is a witness to everyone’s bad trip.

If nothing else, “Climax” is a technical wonder, with Gaspar Noé and cinematographer Benoît Debie’s (2013’s “Spring Breakers”) virtuoso collaboration of the always-moving camera assisting in sustaining an edgy mood through long takes and rave-like lighting. Apart from the masterful opening dance routine, there is a hypnotic overhead shot of a high-energy dance circle that slowly but surely takes a turn, some of the dancers getting more aggressive and three of them laying on the floor by the end, clearly feeling the early effects of the acid (followed by a thirty-minutes-in flash of the main credits). At a later point, once the madness has already struck, the camera flips on the floor as if the drugged-out dancers appear to be an orgy of intensely writhing and thrashing bodies on the ceiling. Improvising off a five-page treatment, the entire cast is fearlessly uninhibited and spontaneous, game to be placed through the wringer and take their minds and bodies to frenzied extremes. Sofia Boutella (2018’s “Hotel Artemis”), a former professional dancer, is the only recognizable face and the only working actor in the bunch, and she is captivating to watch with the willingness to dive into the physically and emotionally draining demands with a freakout involving her black tights.

While the easily offended and weak-stomached will find the film repellent and unwatchable, Gaspar Noé’s most fiercest defenders might even fool themselves into believing there is more here than a cruel, nihilistic, nightmarish experience. It’s hard to say what lives under the surface—text flashes on the screen, like “Life is a collective impossibility” and “Death is an extraordinary experience,” as if to lend meaning—and how much of Noé’s intoxicating high-wire artistry actually serves the storytelling and how much of it is just the ballsy auteur’s urge to shock and show off. Even at 95 minutes, “Climax” is a wildly challenging, often numbingly repetitive sit that overwhelms, mesmerizes, and intimidates. If it never quite achieves the emotional heartbreak as 2010’s mind-blowingly transcendent, legitimately great “Enter the Void,” there’s still no way to deny Noé’s berserk descent into hell and loss of control being effectively visceral and unforgettable. Indifference isn’t really an option for a dizzying, brain-melting sensory assault that is hard to endure but even harder to shake.