Lock up the "The Ward" with John Carpenter's other duds 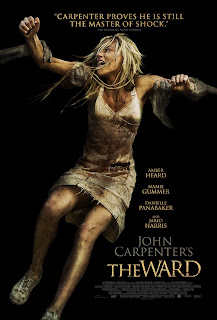 Never one to be shy about coming off self-serving, John Carpenter seems to be making horror films for himself now because "The Ward," his supposed return to form, is an unoriginal dud. This is "John Carpenter's The Ward" after all, but "Halloween" this is not. After burning down an old farmhouse and being arrested by the police, amnesiac runaway Kristen (Amber Heard) gets admitted to an understaffed Oregon mental institution. Right away, things don't seem right, and she becomes haunted by the angry ghost of a departed patient who's killing off Kristen's four fellow loonies (Mamie Gummer, Danielle Panabaker, Lyndsy Fonseca, and Laura-Leigh) that walked off the set of "Girl, Interrupted." Could it be the seemingly caring doctor (Jared Harris)? Is Kristen loco? Or do they really have a ghost in the ward? How can a ghost operate the hospital's electroshock?

Set up as a snake-pit ghost story set in the late 1960s, "John Carpenter's The Ward" tries playing with our expectations, until becoming a slasher flick and ending up as "Shutter Island" psychobabble with that same-old twist (you know which one). Horror-meister Carpenter is still strong behind the camera and shows a sense of craft. He knows how to light a creepy hallway, establish a spooky, one-dark-and-stormy-night atmosphere, and gives us five hokey but effective jump-out-of-your-seat scares. Carpenter doesn't compose his own score time time, but Mark Kilian's score is tingly and haunting.

Michael and Shawn Rasmussen's script just doesn't measure up to the rest. The brutal kills help break the monotony, but like a deflated balloon, a plot revelation three-quarters of the way in isn't much of a surprise, and the cheesy, ludicrous twist of moldy leftovers is the final straw. Heard makes for a strong, edgy heroine, but her female co-stars' performances are either histrionic (Gummer) or embarrasssing (Leigh). It's been a long wait for Carpenter to reinvent himself (since the 9-year-old "John Carpenter's Ghosts of Mars"), but considering "The Ward" has no original style or narrative trick of its own, desperate horror fans wouldn't have minded the delay. Mostly it's one big gotcha.