All freshness skunked in "Hangover Part II" but laughs aplenty 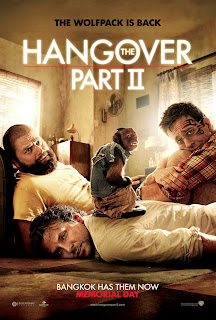 Even more wildly popular than "Beverly Hills Cop," Todd Phillips' "The Hangover" became the top-grossing R-rated comedy. It was a wild, pretty clever, funny enough sausagefest-romp but didn't change the world either. Now we have "The Hangover Part II," which at first glance looks more like a lazy, cynical, phoned-in remake. Because the setup is so tantamount to the first movie, it's as if screenwriters Craig Mazin, Scot Armstrong, and director Phillips played the Mad Libs word game while writing it. But since the original was such a hit, why not construct virtually the same blueprint? As a pointless sequel, "The Hangover Part II" isn't expected to have the same surprise or thrill as the first time around, but it doesn't show a shortage of laughs either.

"The Hangover Part II" substitutes glitzy Las Vegas for seamy Thailand, but the gang's all here, as dentist Stu (Ed Helms) is there to get married to a lovely Thai-American woman (Jamie Chung) whose father makes it clear Stu is as soggy as rice. So rather than just having brunch at an IHOP as a bachelor party, the smooth Phil (Bradley Cooper) and screwball Alan (Zach Galifianakis) push to celebrate with a few beers as The Wolfpack, along with the soon-to-be-bride's 16-year-old Stanford whiz brother, Teddy (Mason Lee), and the former lost groom, Doug (Justin Bartha). Once again, the man-boys wake up in a drunken stumpor, only now in a squalid Bangkok hotel. What happens in Bangkok, stays in Bangkok. There's that call to Doug's wife Tracy (Sasha Barrese) again: "It happened again." But instead of the tiger/baby/chicken in the hotel room is a smoking, drug-running monkey. Rather than Stu waking up to a tooth missing, he has a face tattoo like Mike Tyson. Alan's head is shaved. And the missing person is the brother-in-law…with his severed finger left in a bowl of ice. What clues will the Wolfpack find this time to piece together their hangover?

A dark, meaner edge and the dare-you-not-to-laugh brashness allow the same beat-by-beat story to hang together, and it's just as wild and still pretty funny even if the freshness in solving the mystery feels a bit, well, skunked. "The Hangover Part II" gets most of its manic comic momentum and laughs from the chemistry of these three stooges and their casual throwaway lines.

This time, Galifianakis makes his goofy, drug-inducing Alan even more mentally challenged and obnoxious than before, almost to the level of his rehashed character in Todd Phillips' "Due Date," but he's still a scene-stealer. And while Ken Jeong's Chow was the weakest spot in the original, whatever comes out of his cackling mouth here is quotable and pure insanity. Oh and yes, his private junk comes "up" for a sight gag again. Although not the one lost this time, Justin Bartha is curtailed again, while Lee's Teddy is poorly used.

The shenanigans, ranging from a tranny strip club to a buddhist temple, earn laughs, and director Nick Cassavetes makes an amusing cameo as a tattoo artist, as does Paul Giamatti as a crime lord. The Mike Tyson reprisal cameo falls flat, but the final "revealing" slideshow of the real debauchery that went down is just as shockingly hilarious as before, and includes one ballsy photo reminiscent of a controversial Viet Cong prisoner execution. So, while "The Hangover Part II" doesn't bring anything new to the party, it will please fans of the first three-sheets-to-the-wind escapade in spades.