"Something Borrowed" takes the middle road 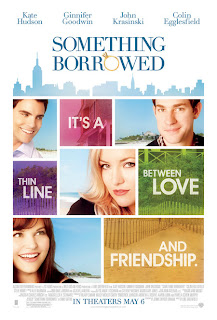 Lately, a well-done romantic comedy is like asking for pigs to fly. For every "Going the Distance" and "No Strings Attached," there are shrill and unfunny misfires like "Bride Wars" and "The Back-Up Plan." The in-between "Something Borrowed" tries to be more than just another disposable "chick flick." It's a wedding/love-triangle "sismance" romantic comedy, based on Emily Griffin's best-selling novel, but while it borrows from "My Best Friend's Wedding," "Something Borrowed" gains some truth and insight into female relationships too. Sweet-cheeked Ginnifer Goodwin is Rachel, the doormat protagonist, an attorney who's just turned 30 and makes the mistake of sleeping with her longtime crush and law schoolmate Dex (Colin Egglesfield), who happens to be her best friend's fiancee. This obviously gets her into a real pickle, as she vicariously lives through the wild, sexy Darcy (Kate Hudson), whom she's known forever. Rachel introduced Darcy to Dex six years ago and practically gave him away, even while secretly in love with him and Dex still having feelings for her. Once their affair takes off and feelings are finally revealed, Rachel and Dex can't seem to reveal the truth to the third wheel. 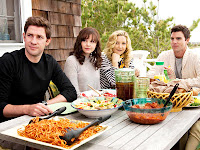 Without even trying, Goodwin is adorable as ever and makes her Rachel likable, despite being a pathetic martyr and not having much of a backbone. Egglesfield has Tom Cruise/Eric McCormack good looks and shows some charisma, but his Dex is passive and lacks decisiveness. Hudson is in the toughest spot, playing such an obnoxiously self-involved, immature party girl, that she barely gets the chance to rise above one dimension. At least she's having fun. But it's never understandable why Rachel and Dex, respectively, would be best friends with or be getting married to Darcy in the first place. Of course, Rachel is made to be the less "hot" one, even though she's just as gorgeous. And since Darcy never seems to work, why so many back-and-forth visits to the Hamptons? Another mystery is why Dex's old-money parents would rather him marry Darcy than the smart, good-hearted Rachel. Because Dex's mother (Jill Elkenberry) is depressed? Take her to a therapist, don't marry a dim narcissist! The real comic relief is John Krasinski, as Rachel's best platonic male friend Ethan who figures out what's going on before Darcy and acts gay to turn off a clingy gal (Ashley Williams). He steals every scene with his instant likability and wittily timed line readings.

Directed by Luke Greenfield (2004's severely underrated gem "The Girl Next Door"), working from TV writer Jennie Snyder's script, the film doesn't resort to cheap slapstick. There's a hit-in-the-face gag with a badminton racket, but it's more character and plot-driven, and Hudson and Goodwin perform a fun choreographed dance to Salt-N-Pepa's "Push It" that reflects the characters' history and friendship. Though it's overlong and could've been improved had Darcy been buried in the Hamptons' sand, but "Something Borrowed" is more diverting than not and refreshingly ends on a note of melancholy and happiness rather than settling for a tidy, upbeat foregone conclusion.