New on DVD: "Country Strong" and "Waiting For Forever" 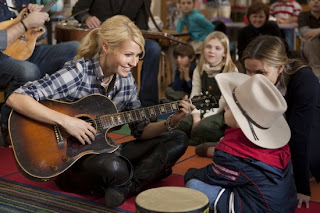 Months, maybe weeks, after Country Strong is long gone from theaters, it'll be known above all as the movie showcase that proves Gwyneth Paltrow can sing when she's not guest starring on TV's “Glee.” That's right, girl's got pipes and she's country strong! This had potential to be like a fun, heartfelt country-song story if it didn't bathe in so many darn tootin' clichés and weren't so thinly written.

Following a drunken public meltdown and a miscarriage during a Dallas concert, six-time Grammy winning country singer Kelly Canter (Paltrow) with a lot of baggage gets released one month shy from rehab for drug and booze addiction to go on a comeback tour. She wants her honkytonk-singing orderly/fling, Beau (Garrett Hedlund), acting as Kelly's AA sponsor, to open for her, but her manager husband, James (Tim McGraw), already has an opening act in the form of doe-eyed, overeager beauty queen Chiles Stanton (Leighton Meester), who suffers from stage fright but might have as much popstar talent as Carrie Underwood and a few secrets. Anyway, they all hit the road, Beau included, but is it too soon for Kelly's comeback, and will she return to the booze and pills?

Written and directed by Shana Feste, the predictably melodramatic, unfocused script is the worst offender, and it's about as smartly choreographed as a square dance. It makes Kelly's miscarriage an elephant in the room, but gives us a clunky metaphor for her loss, as she carries around a wounded baby quail she found in rehab inside a cigar box. Groan.

We don't learn enough about these unfleshed-out characters to care about or make sense of them and their personal demons. Even the editor favors many unexplained, insignificant scenes that only muddle relationship beats. Paltrow sometimes handles Canter's fragility well and her paying a visit to a Make-a-Wish child with leukemia is a nice scene, but she hysterically over-emotes during the self-destructive, mascara-running episodes. It's as subtle as a vodka bottle being thrown at a wall...oh wait, this movie has one of those moments, too.

All the actors give sincere efforts, and they have solid voices as they did all the warbling themselves, but it's frustrating that a real-life country star like Tim McGraw doesn't even get a chance to sing; his James is just aloof. Hedlund, with his scruffy sexuality and charisma, and Meester, who's endearing and photogenic, land the biggest impression.

The drama doesn't always ring true, and the whitewashing script isn't deserving of such an off-puttingly wrongheaded event for the climax if moviegoers think they're in for Kelly Canter's rise-and-fall-and-rise-again tale. But while Feste's script could've used revisions before shooting, the soundtrack at least has some foot-tapping pop songs and Paltrow's “Coming Home” is a crowd-pleaser.

Now for a bad music pun: Country Strong may have some pretty strong singles, but it's a weak album. 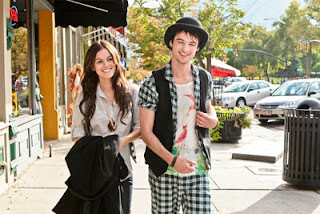 What if a childhood friend entered back into your life and then revealed that he's been following you ever since? Sounds like a horror film, right? It's not supposed to be creepy, but Waiting for Forever is never the sweetly poetic, wistful romance it strives to be either.

More of a miscalculation than a crushing disaster, this drippy, confused stalker-romance could've been a wonderful fairy tale but it just doesn't sit well.

Oddball drifter/street-performer Willie (Tom Sturridge) makes his homecoming to his Pennsylvania town once his childhood friend Emma (Rachel Bilson), now a Hollywood TV actress, returns to see her dying father (Richard Jenkins) in the care of her mother (Blythe Danner). You see, Willie and Emma haven't talked since his parents died in a fatal train accident when they were just children, but he knows Emma's every move…he goes where she is. Willie is so kooky that he dresses himself in a bowler hat and pajama pants, like a Johnny Depp impersonator doing an act from Benny & Joon, while talking to his dead parents.

Director James Keach and screenwriter Steve Adams can never decide whether the character of Will is an eccentric clown or a naive with a serious mental problem that the written and directed treatment of him just comes off sad and irresponsible. If that's not bad enough, a story point involving a murder gets tossed in, needlessly so. The performances aren't bad: Sturridge manages some spacey charm in spite of his ill-defined character; Bilson is cute but given very little to do; and Danner is excellent playing another one of her delicately cheerful dears of a mom.

Whimsical but not irresistible, Waiting for Forever is an odd duck that ends before it can grow on you.