The "Pirates of the Caribbean" Franchise 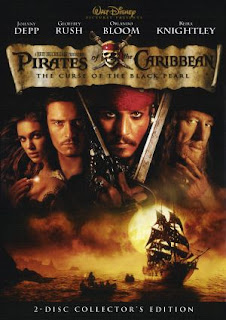 The cross-promotional appeal of "Pirates of the Caribbean: The Curse of the Black Pearl" is that anyone will want to visit or revisit the Disneyland attraction that which the movie gets its inspiration. And enjoy the movie itself, of course! In fact, Johnny Depp as a gypsy-pirate drunk on Captain Morgan is a ride in itself. With matted hair and golden teeth, Depp first makes his gleefully grand entrance, stepping off his sinking boat onto the dock, as rogue scoundrel Captain Jack Sparrow. Once the British governor's plucky daughter, Elizabeth Swan (Keira Knightley), is kidnapped by the evil Captain Barbossa (Geoffrey Rush) and his crew of scallywags, who stole Jack's ship, The Black Pearl, during a mutiny and subsequently cursed and turned into the walking undead whose ghostly bones are shown in the moonlight. With the help of Elizabeth's love, ex-pirate blacksmith Will Turner (Orlando Bloom), and a motley crew, Jack must reclaim The Black Pearl and save Elizabeth before Barbossa uses her as a human sacrifice and restores his mortality with the use of the young woman's gold medallion.

Based on the amusement park water ride, "Pirates of the Caribbean: The Curse of the Black Pearl" (why the double-barrelled title, matey?) might've been a blunder for a movie. It's certainly longer than it needs to be (at two and a half hours) and a tad plot-heavy, if not nonsensical. What's the need for so much swordplay amongst the mortal buccaneers if they can't be fatally defeated? But as it turns out, this is a rollickingly rousing, epic-scale swashbuckler that's a lot of fun to watch. Director Gore Verbinski ("The Ring") moves things at a lively clip and the movie is atmospherically shot, combining the staples of a pirate movie (sword fights, walking the plank) with a ghost story (severed skeleton hands on the loose). Composer Klaus Badelt's main theme also has a driving, heroic rhythm.

The juicy, jolly cast gorges itself on a feast of fun. Top-biller Depp is a chameleon, owning the movie with his relishingly flamboyant performance as the swishy, rum-guzzling, mascara-wearing Sparrow. Rush plays over-the-top villainy with dastardly gusto as Barbossa, Bloom is suitably dashing as the boyish hero, and the very poised Knightley makes for a plucky, beautiful heroine. Even in the slighest roles, Lee Arenberg and Mackenzie Crook are a very goofy-funny Laurel and Hardy type of pirates who need eye and dental insurance. "Pirates of the Caribbean" delivers exactly what you're looking for in overpriced summer popcorn, especially when Depp's Jack Sparrow is guiding the ship. 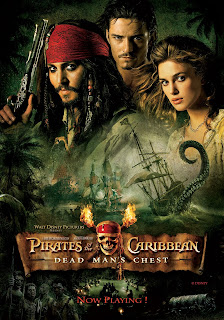 Another Disney World ride, Space Mountain, never got its own movie, but "Pirates of the Caribbean: The Curse of the Black Pearl" was a 2003 summer hit and spawned itself a sequel three years later. You could tell it'd be a franchise because there's a colon in the titles. Less is obviously more, but "Pirates of the Caribbean: Dead Man's Chest" goes the more-is-more route from the Walt Disney-Jerry Bruckheimer juggernaut. Upon their wedding, Elizabeth Swann (Keira Knightley) and Will Turner (Orlando Bloom) are arrested on charges for assisting in the escape of Captain Jack Sparrow (Johnny Depp), so they must find the key to open a mysterious chest that's also wanted by the half-squid, half-human captain of the Flying Dutchman, Davy Jones (Bill Nighy).

Bloated by at least an hour, this sporadically fun but trudging sequel has no hard-driving story to tell, but it still has enough imaginative treats that nearly top "The Curse of the Black Pearl." As always, this "Pirates" movie is stylishly designed, boasting very impressive monster makeup. More engaging and amusingly over-the-top are the action set pieces: the hamster-wheel of sorts bit with Sparrow is especially thrilling and funny, and a gargantuan sea monster's attack on the Black Pearl is pretty intense. Depp entertains again as Jack Sparrow in another cheeky, kooky, although more-restrained performance, but as Davy Jones, Nighy gets to eat up the screen with relish, assisted by a deliciously creepy-crawly makeup job. Knightley and Bloom are a little less interesting as characters for the second voyage but still get to do a lot of clomping around. Naomie Harris makes an enjoyably campy addition as voodoo priestess Tia Dalma.

Gore Verbinski returns as director, amping up the action and laughs, and so do the last screenwriters, whose convoluted and overstuffed script has virtually nothing to propel the movie and finds no resolution even by the end, shoving itself into a corner. Instead, we're left with a cliffhanger for yet another sequel. "Pirates of the Caribbean: Dead Man's Chest" is mostly a chaotic blur, but enjoyable as a cotton-candy movie. 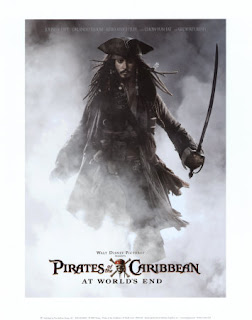 Exhaustingly bloated and interminable, the third installment "Pirates of the Caribbean: At World's End" (shot in tandem with "POTC: Dead Man's Chest") goes down with the ship. When we last found them, lovebirds Elizabeth Swann (Keira Knightley) and Will Turner (Orlando Bloom) needed the resurrected Captain Barbossa (Geoffrey Rush) to rescue rum-soaked Captain Jack Sparrow (Johnny Depp), last seen being swallowed up by the Kraken into Davy Jones' locker. Meanwhile, the devious Lord Cutler Beckett (Tom Hollander) plans to wipe out the pirate population. And blah, blah, yadda, yadda, the plot goes on from there. At a 169-minute running time that don't know when to shut up, all that's missing is the kitchen sink—Chow Yun-Fat is wasted and The Rolling Stones' Keith Richards drops in as Jack's dad for a stunt cameo. But the plotting feels clogged, convoluted, and overwritten.

Aside from the fun Depp and some crackling wit breezing it along, this "three-quel" spins its wheels as even most of the action sequences feel more like tediously hectic trials rather than so-called summer fun. Most indelibly nifty moments: Jack's head-trip as he hallucinates multiple copies of himself, and a sequence in which the Black Pearl passengers capsize the ship to return to the world of the living. Those tasty morsels aside, "At World's End" goes out with a whimper and hopefully marks the end of "Pirates." The experience is like going to a popular restaurant where the food looks delicious but tasting it is disappointing.