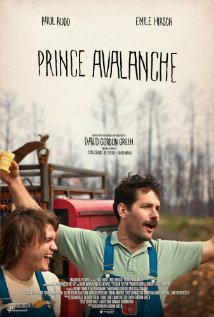 Stripped-down and offbeat, "Prince Avalanche" finds filmmaker David Gordon Green reaching a fork in the road and taking it. If one tracks his entire filmography, from melancholy indies like 2000's "George Washington," 2003's "All the Real Girls," and 2008's "Snow Angels, to more commercial fare such as 2008's "Pineapple Express," 2011's "Your Highness," and 2011's "The Sitter," the eclectic talent melds the lyrical and elegiac with some of his goofier sensibilities. It's a slight achievement that never really comes to a boil, but Green takes two interesting characters, who would never be friends if never thrown into the same environment, and puts them up against a backdrop of seclusion.

In 1987, a Texas forest fire destroyed 43,000 acres and left four people dead. A year later, in the middle of nowhere in Bastrop, Alvin (Paul Rudd) and his girlfriend's brother Lance (Emile Hirsch) are about to spend the summer together. Sharing the same tent, they're there to repaint yellow lines on the highway and install reflector poles. At first, they have different plans, Alvin finding rewards in solitude and writing his girlfriend letters (remember, it's the '80s), while Lance goes stir-crazy and wants to act upon his horniness in the woods, so he goes into town for the weekend. Slowly but surely, a bromance develops as the two learn to have more in common than they thought.

A small indie about a two-person road-crew team might be pegged as less than cinematic, but, in remaking the 2011 Icelandic film "Either Way," writer-director Green finds his own voice, with stretches of quiet, meditative paint-drying and droll, absurdist touches. Slim on forced plot mechanics but not Thoreauvian symbolism, "Prince Avalanche" is so subtle and naturalistic that it gives all two characters room to breathe and create an organic relationship. Not a lot happens, and the title has no significance beyond coming to Green in a dream, but if the viewer is willing to take a closer look, there's certainly a theme of existentialism tucked inside and a haunting layer to the milieu of a skeletal forest.

Essentially, the film is like watching two talented actors camp out with a skeleton crew. Guiding the way as mismatched men at different points in their lives, Rudd and Hirsch somehow make this flawed pair more than tolerable to be around. The mustached former gets away from his arrested-development niche roles to dig into this lonely, fussy oddball and make something as simple as a dance with a fishing rod pretty priceless. Looking like Jack Black's younger brother, Hirsch is a terrific foil, playing Lance as a dim, undisciplined slacker who's not immune to vulnerability. Together, Alvin and Lance's testy relationship builds to a very funny chase scene before they find a happy medium with one another. Though this is mostly a focused two-hander, the now-late Lance LeGault is hilariously spry as an old-coot trucker who brings Alvin and Lance stiff booze and sage advice, and non-professional Joyce Payne has a touching, ghostly presence as a woman Alvin meets while she sifts through the ashen remains of her burned-down house.

Beautifully and poetically photographed like a Ken Burns nature documentary by Tim Orr (who has shot all of Green's films) and complemented by David Wingo and Explosions in the Sky's transcendent score, the film is languid and deliberately paced, often finding artistic poetry in the calm, mundane, and even boring details of road work and camping. Don't misunderstand, "Prince Avalanche" is an odd duck, but it's oddly likable and gentle, refusing to be compartmentalized and offering the best of both worlds in what David Gordon Green does best.