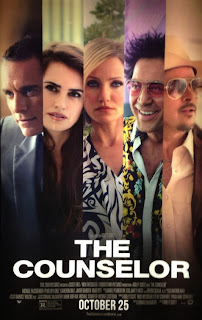 "The Counselor" could be a contender for the coldest movie of 2013. That's more of an observed fact than an actual criticism compared to the film's other problems that make it more of a frustrating experience than a rewarding one. With the impressive pedigree involved—Pulitzer Prize-winning author Cormac McCarthy makes his screenwriting debut under the hands of director Ridley Scott (2012's "Prometheus") and a white-hot array of on-screen talent—where could this go wrong? As merciless as a wire tightening around the neck, "The Counselor" appears to be an enticingly deceptive pulp thriller with all the noir ingredients in place, ready to percolate, until few of the pieces hold together and we're left waiting for the film to still find momentum and stay on course.

Michael Fassbender plays a charming, self-assured, suit-wearing defense attorney who's only known and addressed by everyone as "the Counselor." Working between the Texas/Mexico border and seemingly having it all, he's just bought a diamond engagement ring in Amsterdam for his girlfriend Laura (Penélope Cruz). He then decides to fund a drug deal and gets mixed up in the seedy, take-no-prisoners world of drug trafficking, which, naturally, comes with a handful of characters: perpetually smiling, loudly attired nightclub owner and drug dealer Reiner (Javier Bardem); Reiner's lustful, unashamedly heartless Malkina (Cameron Diaz), who loves nothing more than watching their two pet cheetahs chase down jackrabbits in the Texas savannas; and Canadian middleman Westray (Brad Pitt) who warns the Counselor of what kind of business he's getting himself into. "If you pursue this road that you've embarked on, you'll eventually come to moral decisions that will take you completely by surprise — ones you didn't see coming at all," Reiner even tells him. As the drug deal begins to go sour and someone else has already set his or her own agenda in motion, the Counselor has his back to the wall and isn't just going down, but he's taking everyone down with him.

Before its first burst of ugly violence, "The Counselor" is more like a meandering, scattershot assemblage of literary dialogue exchanges and monologues inside of a convoluted noir plot. And as tastily stylized and intelligently written as the dialogue can be, one can just see McCarthy indulgently typing away on his first screenplay. It's really not until the leading up to a key moment with the Counselor on the phone with cartel member Jefe (Rubén Blades), who delivers a flowery, pretentiously philosophical warning about greed and grief being worthless when you've already made a deal with the devil, that it all just feels extremely stilted and too overwritten to bear. Par the course of McCarthy's previous screen adaptations (2009's starkly realized "The Road" and 2007's brilliant "No Country for Old Men"), the climate of the story is savage, fatalistic and bleaker than bleak, and there are some despicably greedy people here who all learn the hard way that "actions create consequences," as one character helpfully spells out. No one is safe, but who we're supposed to actually be rooting for is a fair question.

With his character only known as "Counselor," the steely, magnetic Fassbender is playing more of a conduit than a character worthy of rooting interest. Fortunately, he continues to command the screen with an intensely smoldering presence that, by default, you want to see how the Counselor's deal pans out. He's not really a bad person, but he digs himself a hole with one really bad decision; his motivation for going through with any of it will give pause and Fassbender slightly overcompensates in his melodramatic final moment, mucus included. He and the warm, stunningly photogenic Cruz, as the completely innocent Laura, certainly share a sizzling, very intimate opening scene of arousal under the sheets (literally, they're under the white, nearly transparent sheets), but it's too bad there isn't more for Cruz to do than to eventually become a pawn in this game of greed.

Bardem relishes in the flamboyant part of tan, wild-haired Reiner, a real character whom can be added to the actor's gallery of colorful creations with a hairstyle more distinct than the last. Reclaiming his white cowboy hat from Scott's own "Thelma & Louise," Pitt is cryptic, laid-back and charismatic, and adopts the rhythm of McCarthy's language most organically. With her silver press-on nails, single gold tooth, and a cheetah-spotted tattoo sprawled down the side of her back, Diaz gives herself completely to the fascinating role of Malkina, a sexual being who's not afraid to show it (or speak about it to a priest for her first Catholic confession). Not having a role this juicy since her Julie Gianni in 2001's "Vanilla Sky," the actress is deliciously fierce as this slinky, string-pulling sociopath, leaping off the screen like one of her pet cheetahs. McCarthy probably envisioned Diaz when he wrote Malkina, and in retrospect, you wish the movie revolved around her. P.S. What she performs on the windshield of a yellow Ferrari convertible as her boyfriend watches might be the most memorable (and titillating) bit in the film, and, thanks to Bardem's recount of that night, very funny. Other noteworthy actors are given a scene apiece, too. John Leguizamo, who used to be an interesting character actor, is now being given cameos, showing up here in one scene. Rosie Perez also gets one snappily written scene while smoking a cigarette as a Texas inmate represented by the Counselor and only wants her son to be taken care of, and then turns clairvoyant (or something) in a dialogue-free bit.

After spinning its wheels for an hour with less-than-airtight plotting and purple prose too writerly for its own good on the screen, the film is still adorned with vivid performances and director of photography Dariusz Wolski's sleek, garishly lush cinematography that pops in every frame. In the end, "The Counselor" is too much of a disappointment, albeit not without moments of watchability and near-greatness to stand as an interesting mess. It's bravely vicious and uncompromising in entering the darkest corners of human nature with its final touches of grisly irony and inevitability, but it underlines its themes in self-important spoken word instead of exploring them in action.