Need for Speed: Ron Howard gets back on track with slick, solid "Rush" 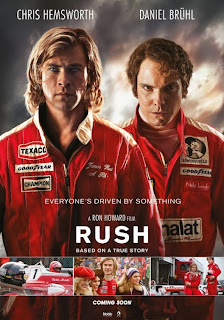 A blunt storyteller and sentimentalist at heart, director Ron Howard tends to purvey polite, Hollywoodized manipulation instead of just letting the story speak for itself but still knows how to deliver an accessible, entertaining crowd-pleaser. (Of course, 1995's "Apollo 13" works every time in spite of knowing its predestined conclusion will never change.) Running laps around 2011's muddled, anonymously helmed misfire "The Dilemma" and two Dan Brown adaptations—2006's long-winded, self-serious "The Da Vinci Code" and 2009's loopier, albeit still tedious, "Angels & Demons"—"Rush" could be Howard's edgiest and most accomplished film to date, a real step forward for him as a skilled filmmaker whose career actually started with the 1977 auto-centric, Roger Corman-produced "Grand Theft Auto." And go figure the typically safe filmmaker's higher-level work is yet another sports movie.

Set in the mid-1970s, "Rush" is the fact-based story built around the rivalry of Formula One racing drivers James Hunt (Chris Hemsworth) and Niki Lauda (Daniel Brühl), who are like night and day on and off the track. The hotheaded, womanizing Brit and the cold, meticulous Austrian, who is called a "rat" for having an overbite, both found their way into the Formula Three division and eventually Formula One and adopted disparate approaches to racing and living. With an extravagant backer, Hunt drove as recklessly and fearlessly around the track as he would bed nurses and groupies. Lauda bought his way in with no help from his wealthy father but through his mechanical savvy, designing fast racing cars for Ferrari, and even after taking a risk that could have cost him his life, he fought through the pain. Racing for the title of World Champion at the 1976 Japan Grand Prix, they knocked heads and busted each other's balls, but ultimately, it was their volatile competition that made them better drivers.

From another screenplay by Peter Morgan (whose first play was adapted to the screen for Howard's "Frost/Nixon"), the film is careful not to paint either Hunt or Lauda as heroes, or distill them as just good and bad, nor does it artificially sweeten them. They both have flaws and struggles like complex human beings do. However, these characters are still only given the shorthand, nuts-and-bolts treatment in the film's grand but speedy 125 minutes. Lauda's life and relationship with the one woman in his life fares much stronger than any of Hunt's boozing and spit-swapping hookups. Olivia Wilde looks great and sports a convincing British accent, but she gets kicked to the sidelines so soon in the thankless, undernourished role of Suzy Miller, a chicly-coiffed model whom Hunt hastily marries before she leaves him for the frequently married Richard Burton. Her scenes are so rushed that she doesn't register as a character so much as a check-off point. As Lauda's new wife Marlene, Alexandra Maria Lara doesn't get the chance to fully flesh out her part, either, later becoming a spectator, but has a few amusing exchanges upon first meeting Lauda and credibly brings out a loving bond with Brühl.

It wouldn't be too far afield to say both drivers won't be winning the title for Mr. Congeniality, but it'd also be a disservice to the two actors' performances, which are anything but one-dimensionally unlikable. If writer Morgan glosses over these men's relationships, even as Howard generously weaves between their polar-opposite lives, Hemsworth and Bruhl more than make up for the script's often deficient profundity. They not only look the parts (as you'll notice in the epilogue's real-life footage) but believably play them with even more complexity than they were probably written on the page. James Hunt is a shallow, oversexed, preening prick who pukes before every race and fills his life with excess and women. Hemsworth, with his hunky, sandy-haired Brad Pitt quality, has more than enough charisma and range to create a sexy if vulnerable and damaged specimen out of the flashier role. Without growing inconsistently cuddly, even after suffering horrible third-degree burns and equally horrible medical treatment, Niki Lauda is often described as an "asshole," replacing emotion with arrogance. Well, in the film's most compelling acting turn, Brühl delineates the caustic but tenacious Lauda, warts and all, and yet colors the character with sympathy and smarts.

"The closer you are to death, the more alive you feel," Hunt mentions in voice-over, relaying why he races. Fast-paced, roaringly sound designed, and rapidly cut without losing cohesion, the racing sequences are the most thrilling element of the film. They make you feel that danger and exhilaration, and are even more electrifying and rattling than anything in the "Fast and Furious" movies (and that franchise is solely about the vroom). Filtered with a stylishly gritty '70s look, every frame is slick but splendidly textured, courtesy of director of photography Anthony Dod Mantle ("Trance"). Mark Digby's production design and Julian Day's costumes capture the period details to a T without ever looking ironically kitschy. Also, Hans Zimmer's score never overshadows the drama as much as it could have, and the existence of Steve Windwood's "Gimme Some Lovin'" and David Bowie's "Fame" doesn't hurt.

The film might skid a bit in an unnecessarily oversold final scene, set in an airplane hangar, that talks us through the characters' feelings, spelling out what we've already learned. And, while it's more of a good, solidly condensed version of a great movie, "Rush" is still a satisfying, supremely well-made and well-acted entertainment that shouldn't go unnoticed. If Ron Howard is up to throwing out the cookie cutter and showing more guts (as well as Mr. Hemsworth's bare rear) as he does here, go, Opie, go.