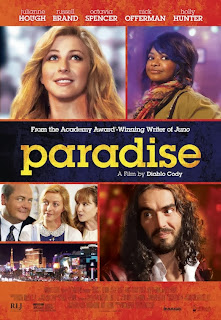 The directorial debut of Oscar-winning screenwriter Diablo Cody, "Paradise" saw a quiet debut on DirecTV's video-on-demand platform at the end of the summer. It's not the most unusual distribution scheme, now that movies are given early releases on iTunes and other VOD services, and given the quality of the zingy scribe's first movie, one's living room might be a better alternative than schlepping to the multiplex and shelling out the big bucks. Cody first impressed with the 2007 winner "Juno" and continued to keep her fresh, distinct voice heard in other scipts with 2009's totally undercelebrated "Jennifer's Body" and 2011's brutally scissor-sharp "Young Adult," so with that spotless track record, it's just too bad that expectations should be tempered to something as cloyingly earnest and disappointingly benign as her inaugural time behind the camera.

In small-town Montana, 21-year-old Lamb Mannerheim (Julianne Hough) was once a good Christian girl, until surviving a plane crash that left her scarred physically and spiritually. After denouncing God in front of her conservative parents and the entire congregation, she packs up her suitcase (and her "L.L. Bean tote bag full of cash") and heads off to the city of all sin — Las Vegas. Arriving at a saloon where she takes the first drink of her life, Lamb befriends womanizing but non-threatening bartender William (Russell Brand) and down-and-out but wise lounge singer Loray (Octavia Spencer). They take the wide-eyed little lamb under their wing and go out for a safe night around Paradise, the real Vegas. On Lamb's quest to "experience worldly pleasures for the first time" like "your basic abominations," she gets a tattoo, which is merely a dot; she cuts her hair about an inch shorter; Loray and William show her a nudie magazine from an adult bookstore; and they go zip-lining! Lamb isn't an atheist now; she's just trying to live a world she never knew and gather her own beliefs.

Made with nothing but the purest heart, "Paradise" does get off to a biting start. Lamb stands at the pulpit of her church. Instead of delivering an inspirational speech, she shares her newfound faith that there is no God, that she plans to vote Democrat, and will leave for Sin City to gamble, dance, drink alcohol, and "frolic with homosexuals." But then . . . the film seems to be taken over by the Disney Channel merged with an evangelical Christian-aimed label. It's like a "Wizard of Oz" fable, with a paid but nonsexual session between Lamb and a prostitute (Kathleen Rose Perkins) in a club bathroom stall (don't ask), and there are certainly hints of Cody's trademark snark, clever/overwritten mon mots, and some Vegas satire, but it's all so blandly formulaic and as innocuous as an already-declawed kitten when it needed more of an edge. Everyone feels like either a namby-pamby archetype, a screenplay construct, or a really nice person.

If singing and dancing were part of her skill set in "Footloose" and "Rock of Ages," Hough continued to show her bright charisma and more of what she could do in "Safe Haven." Here, as Lamb, she comes across very sweet and affecting. It's still baby steps in her acting career, and even when Lamb sometimes feels too unbelievably credulous, the cutie-patootie star (even with burn scars) has an undeniable warmth and ease on camera and makes Cody's often snappy dialogue feel like her own. As Loray, Spencer is an invaluable presence and brings levity, as she always does, even poking fun at her actual function in the film as the "Magical Negro" (a plot device the character explains to Lamb from being a part-time film student). Also, Brand acts on the fringe between unctuous and warm, but he's actually much more restrained here in a good way. Alas, Holly Hunter and a shaved Nick Offerman are let down by the screenplay, being given short shrift and only appearing in the bookend scenes as Lamb's God-fearing parents.

Anyone is bound to argue, but Cody at least approaches the character of Lamb Mannerheim (sure, the name is a little on-the-nose and too cute) with a different, slightly less quippy and cynical voice than either Juno MacGuff, Jennifer Check, or Mavis Gary. She's more naive and more outwardly charming, like an unthreatening alien exposed to a whole new planet. Unfortunately, rather than leaving one feel as if they've been on a journey with Lamb, "Paradise" feels like vanilla-flavored cotton candy that's nothing to write home about. Hough is like a shining light, and Spencer and every other Cody line count as bright spots, but the best that can be said about it is that it's pleasantly sunny and not an awful way to spend 86 minutes; it's just not that worthwhile.