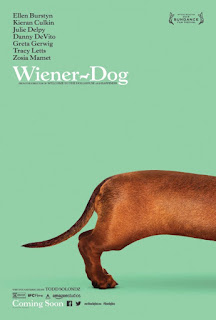 Writer-director Todd Solondz (2012’s “Dark Horse”) can be a specialized taste—many find his work to be depressing, off-putting miserablist tales that put his characters through the wringer—and his latest won’t change anyone’s mind. A sort-of follow-up to the unofficial Dawn Wiener series, “Wiener-Dog”—the nickname of the filmmaker’s bullied 11-year-old character from 1995’s unflinchingly spot-on “Welcome to the Dollhouse”—is true to form for feel-bad auteur Solondz. It’s simultaneously cynical and sad, compassionate and humane, and this time also kind of stale. Even with an actual wiener dog involved, don’t be fooled into thinking Solondz has gone soft. While the film isn’t without hints of hope and insight, “Wiener-Dog” is just as thorny and starkly humorous with more to recommend it than not.

“Wiener-Dog” follows the titular dachshund, linking a revolving door of four vignettes—a tetraptych, if you will. The first owner is an inquisitive boy named Remi (Keaton Nigel Cooke), who’s comforted with a pet dog by father Danny (Tracy Letts) after surviving cancer. Brittle, unhappily married wife Dina (Julie Delpy) is not happy about it, and eventually, once Danny gets stuck walking and training the puppy, he has just about had it, too. Remi loves “Wiener-Dog,” but when the man’s only friend gets sick, he has to say goodbye. Right before the animal is supposed to be put to sleep, vet assistant Dawn Wiener (Greta Gerwig) actually ends up rescuing and nurturing the pooch back to heath before renaming the pup “Doody.” When Dawn runs into her former bully-cum-crush, Brandon (Kieran Culkin), she happily tags along with him on a road trip to Ohio. By the end, she meets Brandon’s Down Syndrome brother Tommy (Connor Long) and wife April (Bridget Brown) and decides to give them “Doody.”

Before the last two stories, there is an amusing intermission with “Wiener-Dog” taking a long quest through Monument Valley, a winter storm, a baseball field and a strip club stage as a western-style ballad is sung. The connective tissue mostly ends from there because when we next find the dachshund—or maybe a different one—the owner is a one-hit-wonder screenwriter and film school professor Dave Schmerz (Danny DeVito). This thread could be a great short film on its own, DeVito superbly heartbreaking as this sadsack, and a scene where an incoming film student can’t even name a single film in front of the professors is very funny. From there, the dog is now named “Cancer” and owned by Nana (Ellen Burstyn), a bitter, sick old woman who’s visited by her granddaughter, Zoe (Zosia Mamet). It’s the first time in years that Zoe has seen Nana, and this time it’s for a selfish reason: she needs money to fund her unfaithful boyfriend Fantasy’s (Michael James Shaw) art project.

The performances are all strong, focusing in on Solondz’s specific tone. Aside from the fully sympathetic Danny DeVito, Tracy Letts and Julie Delpy are bitterly funny as Remi’s mostly awful parents. As Solondz is wont to do, already-established characters are recast. Even though 2004’s “Palindromes” cruelly killed off Dawn Wiener (Heather Matarazzo) from “Welcome to the Dollhouse,” she is still alive and now played by Greta Gerwig. This might be the most hopeful we will ever see Dawn, and Gerwig brings a tender loneliness that may or may not be fixed by “Doody.” The last section is the most poignant, all thanks to Ellen Burstyn, who’s hilariously prickly as she is devastating, and Zosia Mamet also does nice work as her lost granddaughter.

Structured as a life cycle from youth to old age, “Wiener-Dog” could be seen as Todd Solondz’s version of “Boyhood" mixed with "Marley & Me," only with the filmmaker’s signature blackly comic tone and the mandatory need for a hard drink afterwards. It is a Solondz film and emphasized by one of the characters calmly stating, “We’re all going to die,” so animal-loving viewers probably shouldn’t become too attached to the doggie. There is a lot of suffering here and a tinge of catharsis, and where else are you going to find a tracking shot of a trail of doggie diarrhea made poetic? Those already in tune with Solondz’s pessimistic worldview will find more to like here than viewers coming into "Wiener-Dog" blind.