Love Thy Neighbor's Baby: "Ones Below" elegantly tense and well-performed 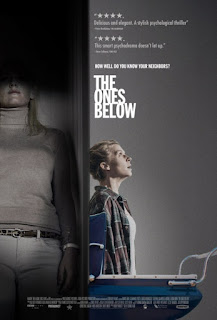 Bringing a baby into the world can be a joy, but it can be pure hell, too. This idea gets ratcheted up with a mixture of paranoia and the trusty old “...from Hell” Thriller template. (You know, the “Babysitter from Hell” thriller, the “Roommate from Hell” thriller, etc.) Well, “The Ones Below” is a “Duplex Neighbors from Hell” thriller, but instead of being just trashy fun, it’s actually executed with more elegant style, intelligence and concern for character psychology than expected.

Expectant thirtysomething couple Kate (Clémence Poésy) and Justin (Stephen Campbell Moore) live in the upstairs flat of a house in London. When their elderly downstairs neighbor dies, a new couple moves in below and, coincidently, they, too, are expecting a child. Jon (David Morrissey) is a stern, affluent businessman and Teresa (Laura Birn) is his friendly, younger wife from Finland. The upstairs couple notices something a little odd about the new tenants: Jon and Teresa always take their shoes off outside the door, even of their own precise, pastel-colored home. Setting aside their hyper-neatness, the two women share that special bond—Kate 18 weeks pregnant and Teresa 21 weeks and even more overjoyed than Kate—and become friends. When Kate and Justin have the couple below over for dinner, tension rises and they get the sense that Jon and Teresa might not be as happy as they let on. To make things even more uncomfortable as Jon and Teresa leave dinner, a tragic accident occurs that will change everything.

The feature debut from screenwriter David Farr (2011’s “Hanna” and AMC’s miniseries “The Night Manager”), “The Ones Below” is chilly and comparatively subdued when stacked up against thrillers from the ‘90s like “The Hand That Rocks the Cradle,” “Pacific Heights” and “Arlington Road.” At 87 minutes, the film is economically written without an ounce of fat. Even the fact that Kate’s mother (Deborah Findlay) is a cold fish is an informative detail that adds context and doesn’t feel extraneous. Having an unloving mother of her own, as well as a history of mental illness in her family, gives Kate fears that she might not be fit to be a mother. It is obvious that there is something to read between the lines—something is off with Jon and Teresa—but how Farr gets to that conclusion is pleasingly twisted and discombobulating. Is Kate crazy or just deprived of some much-needed rest? Or, do Teresa and Jon actually have heinous ulterior motives? That uncertainty and shaky sense of perception are what drive the film. To read the rest of the review, go to Diabolique Magazine.