Don't Come Back: "Independence Day" sequel zaps the threat, the fun and thrills of predecessor 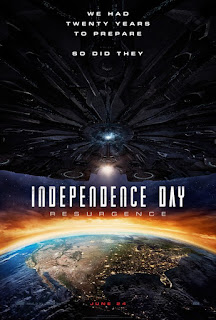 1996’s “Independence Day” broke box-office records and turned post-“Fresh Prince of Bel-Air” Will Smith into a movie star, so much so that he didn’t have to appear in the sequel. The largest of the large-scale summer blockbusters, director Roland Emmerich’s (2013's "White House Down") sci-fi disaster spectacle rightfully has its defenders; it was the first time he was able to share with the world his predilection for blowing up famous landmarks real good. Oh, the writing was dumb and some of the film's non-explosion effects look clunky and not fully realized in 2016, but there was also a sense of fun, a threat and an excitement there that do not register in the sub-par, by-the-numbers sequel “Independence Day: Resurgence.” There is always a spot reserved for a disaster movie in cinemas (last summer's "San Andreas" got it right), but it should be better or even bigger than this moronic excuse for air-conditioning. It’s no more than competent on a technical level and sometimes inches away from being a disaster itself.

Twenty years after the War of 1996 where Captain Steven Hiller (Will Smith, only seen in a painting hung in the White House) beat the alien scum, the humans are more advanced, having developed hybrid alien vehicles and weapon systems should the space invaders ever return, while Madam President Elizabeth Lanford (Sela Ward) is now in the Oval Office. When a foreign spacecraft nears the moon’s Earth Space Defense station, the government shoots it down, against the wishes of ESD director David Levinson (Jeff Goldblum), now joined with ex-flame Dr. Catherine Marceaux (Charlotte Gainsbourg). It’s not long before a mothership attacks the planet intent on drilling to the planet’s core to kill all of mankind, forcing feeble and grey former President Thomas J. Whitmore (Bill Pullman) and fresh-out-of-a-coma scientist Dr. Brackish Okun (Brent Spiner)—both reeling from the psychic connection they have with the aliens—to come back into the fold. That leaves Whitmore’s grown daughter Patricia (Maika Monroe) and her fiancée, fighter pilot Jake (Liam Hemsworth), along with rival/friend Captain Dylan Hiller (Jessie T. Usher)—the late Captain Hiller’s stepson—to take their Earthling independence back once and for all.

Packed to the gills with so many characters, “Independence Day: Resurgence” doesn’t give a dime about any of them and yet keeps on adding more “stuff” until everything is an afterthought to the destruction. The first “Independence Day” wasn’t exactly a beacon of intelligence, but its storytelling was comparably eloquent. Helmer Roland Emmerich and his committee of co-writers—Nicolas Wright & James A. Woods and Dean Devlin and James Vanderbilt—concoct a script so crummily overwritten with so many underwritten subplots fighting for screen time. If all that weren’t enough, Levinson’s kvetching father Julius (Judd Hirsch) gets in on the story, particularly when he teams up with a teen (Joey King) and her three siblings in their family station wagon to drive to safety. Also, in a wrongheaded decision, screenwriter Nicolas Wright is cast as annoying comic relief, a nervously chatty accountant who learns to toughen up. Emmerich also increasingly loses his hand on pacing and coherence, busily intercutting between Washington D.C., Area 51, and the Moon’s defense headquarters, all of which lack the scope one wants to see in a genre movie based purely on sensation.

In a mix of returning cast members and newcomers, the ensemble is a good one, but most of them are dealt a sorry hand with forgettable, tissue-thin characterization. Making one of several encore performances here, Jeff Goldblum bothered to return, and he’s at least fun to see at the head of a summer movie again. As David Levinson and not Ian Malcolm, he gets exactly one memorable, self-aware throwaway one-liner, “They like to get the landmarks,” that might be missed during the chaos. Though the PTSD-suffering President Whitmore hasn’t aged enough to act like he’s 80, Bill Pullman also gets to be an old face from the past. Liam Hemsworth finally gets a chance to flash some charisma as hotshot pilot Jake; if Hollywood ever set out to reboot “Top Gun,” he could probably fill Val Kilmer’s shoes in the Iceman role. Then there’s Jessie T. Usher, whose Dylan is exactly as brash and quip-ready as his stepfather but really has nothing to do; his interpersonal conflict with Hemsworth’s Jake is so lame that it has “get over it!” written all over it. Crazy-haired Brent Spiner makes a welcome comeback as the kooky Dr. Okun, and his loving same-sex relationship with Dr. Isaacs (John Storey) is invested with the vaguest authenticity. Vivica A. Fox is back as Jasmine Hiller, who apparently changed career paths from an exotic dancer to a doctor without comment, but the character is so poorly handled, her screen time petering out abruptly to a deflating degree. She might as well have been written out like Will Smith. Continuity does not continue with the absence of Margaret Colin’s Connie, Levinson’s wife, and Mae Whitman’s First Daughter Patricia Whitmore. In place of Whitman is Maika Monroe, who made a name for herself in both “The Guest” and “It Follows.” It’s not her fault that the role is so blankly written, resulting in an uncharacteristically flat performance. In one last sexist female part, the bizarrely present Charlotte Gainsbourg is left to ask a lot of questions as Levinson’s doctor love interest.

Two decades is a long wait for a sequel, and this was the best the moviemakers could come up with? Viewed as nothing more than a popcorn-munching tentpole, “Independence Day: Resurgence” doesn’t even offer many medium-sized thrills, which director Emmerich is evidently clumsy at generating this time. Why must a smart, clever script and well-designed destruction be mutually exclusive in a film like this? Both are sacrificed in this case. While the visual effects team does manage one gravitational-pull trick, lifting everything and everyone into the sky, it can be counted as the only spectacular piece of spectacle. Smacking more of obligation than energy or charisma, “Independence Day: Resurgence” has the staying power of a sparkler without enough fireworks to co-exist with its big, dumb predecessor.