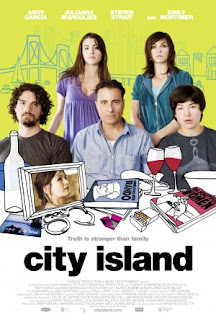 Writer-director Raymond De Felitta's likable human comedy-drama acquaints us with the Rizzos, a boisterous party of four City Islanders residing in the New York fishing village on the outskirts of the Bronx. In "City Island," Andy Garcia is Vince, a prison guard, er sorry, corrections officer who secretly takes acting classes in Manhattan without telling his wife or kids, saying he's going to play poker. While his shrewish wife, Joyce (Julianna Margulies), thinks he's actually having an affair, Vince also has another secret: he brings home one of the parole-released prison inmates (Steven Strait), his grown son from a previous marriage. Basically every family member harbors a secret and all of them smoke cigarettes on the sly.

De Felitta's script has its share of contrivances and broad characters (the son has fatty fetishes, the daughter back from college is a stripper). But De Felitta gives "City Island" a bright look and a breezy pace with nicely written dialogue and engaging performances that don't exactly cross the line to caricature. Andy's real daughter, Dominik Garcia-Lorido, as daughter Vivian isn't bad, but Ezra Miller as Vince Jr. is an irreverently funny young actor. Vince's acting audition with casting directors for a Scorsese picture is invaluable. All the plot strands do come together in a messy climax on the street, but it never turns into just a screaming match of family dysfunction as real-life secrets and misunderstandings bubble to the top, telling us “Life is very messy.” Emily Mortimer co-stars as Vince's acting-class partner (they begin a platonic relationship), and Alan Arkin more or less has a cameo as the acting coach but is amusing when he condemns Marlon Brandon's acting pauses.

"City Island," far more enjoyable than Derick and Steven Martini's dysfunctional-family melodrama "Lymelife" from 2008, is closer to a sitcom but it's still honest and easier to connect with the Rizzos.