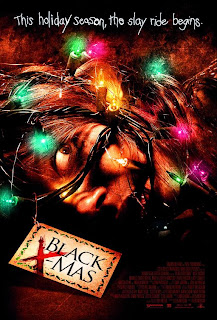 On the first day of Christmas, producers sent to us seven dead sororostitutes . . . and their heads in a pear tree. With as much taste as "Silent Night, Deadly Night," this vulgar, gratuitous but nastily entertaining slasher pic proves nothing's sacred by “re-imagining” Bob Clark's 1974 stalk-and-slash trend-setter "Black Christmas" and being released on December 25th (which upset religious groups). But, it is what it is: a dumbed-down, black-hearted, R-rated body-count programmer that can't really be defended but offers enough pleasures to those who aren't snowflakes.

At the Delta Alpha Kappa house on Christmas Eve, bitchy, spoiled sorority chicks (Michelle Trachtenberg, Katie Cassidy, Mary Elizabeth Winstead, Lacey Chabert, Crystal Lowe) are snowed in during a winter storm (of course), then stalked and slain (of course, again) by a remorseless lunatic, who escapes the insane asylum and returns to his former house fifteen years later. Psychos want to be home for Christmas, too, you know. From perversely deranged, overexplanatory backstory, we come to see why the killer Santa, Billy Lenz (Robert Mann), and his inbred, hermaphroditic sister/daughter, Agnes (Dean Friss), have a thing for eating eyeballs. You see, he was born with jaundice, hated at birth by his (wait for it) incestuous momma and locked in the attic, until getting his revenge and eating cookies made from flesh off her back. And visions of sugar plums danced in his head! Will any of the sorority sisters be alive for Christ's birthday?

Barren of suspense or a whodunit, this "Black Christmas" is wrapped with killer-in-the-house clichés, red herrings, false alarm jolts, and messy editing between the 1970s flashbacks and the present-day slashing, as well as a hectic, overextended climax reeking of post-production tinkering. But the vacuous hotties, who are barely distinguishable in their personalities and offed in predictable order, get in some catty one-liners and add attractive flesh for the slaughter. And if grossness makes you giggle, this glossily produced junk merrily delivers the blood splatter, gory kills, and cheap shocks, some of them mean (plucked-out eyeballs) and some of them winter-themed (icicle impaling, candy cane stabbing, ice skate to the head), all with wickedly tongue-in-cheek glee and without much restraint. Even someone's decapitated head is used as the star on a Christmas tree.

Writer-director Glen Morgan said it himself, after his underestimated, quietly creepy "Willard" remake bombed with the critics and at the box-office, that he cynically set out to make a blood-and-guts movie for the masses. In doing so, "Black Christmas" has some visual style and seasonal color, and knows how to stage a brutally sick kill, while also making a few respectful callbacks to the original (plastic bags around victims' heads, a dead young woman in a rocking chair in the attic, the P.O.V. killer shot, the glass unicorn figurine, and Andrea Martin's presence, carried over from the original film, as the sisters' housemother Ms. Mac). Even the brief use of Kay Starr's "The Man with the Bag" before a sorority sister is suffocated with a bag is morbidly clever. Then again, the obscene phone calls that came from inside the house in the original now come from each victim's cell phone, an updated touch that comes off less chilling this time around.

Anyone who has seen the trailers and television spots will remember the killer hiding on the ceiling above Trachtenberg, a body under the ice, and Chabert getting tangled in Christmas lights and pulled into a thresher. Disappointingly, none of those bits are to be found in the finished product, just a few more examples of missed opportunities and lack of truth in marketing. The creepier 1974 precursor took its time building suspense and its characters, and was more open to ambiguity, whereas this 2006 redux moves like a marathon runner, sets up stick figures, and spells everything out. Not exactly the effective ho-ho-horror film it could have been, "Black Christmas" is at least a howler of a guilty pleasure. 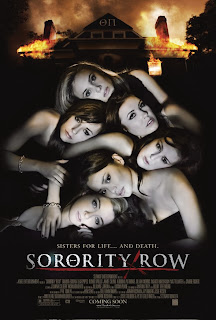 "Sorority Row" is blood-simple teen slasher fare for text-generation dummies. To get revenge on a cheating ex-boyfriend, the sorority of Theta Pi goes too far with a cruel prank that accidentally results in one of the sisters, Megan, dead. (Thankfully, it's cosmetically unflawed Audrina Patridge from MTV's The Hills). The remaining five dump the body in an abandoned mine shaft and keep it a secret. Then eight years later on graduation day, an unknown killer sends the sisters threatening text messages and predictably picks them off. OMG, could it be Megan back from the dead?

This loose remake of the 1983 horror film "The House on Sorority Row" comparably has more in common with "I Know What You Did Last Summer" and the "Black Christmas" redo, trading in its slicker-clad killer with a hook for one in a black, hooded robe and a pimped-out tire iron. There is very little surprise in the order of which girl is going to get it since the movie is all slash and no suspense, but relatively speaking, the oral murders with a wine bottle, a flare gun, and the tire iron are inventively gory and brutally mean. As for the whodunit twist, it's unsatisfying and doesn't make a lot of sense, and Stewart Hendler's direction of the action relies on too much jittery camera work.

The performances are moderately sharp and distinct, except for Asian hottie Claire (MTV's “The Real World” member Jamie Chung): Leah Pipes as bitchy leader Jessica delivers her mean-girl lines deliciously; Margo Harshman seconds that with the funniest, most inappropriate lines as boozing slut Chugs; and Brianna Evigan as the protagonist, tough, throaty-voiced Cassidy, is the most appealing. But a bespectacled Rumer Willis, though not her fault with the dialogue, overdoes it as the mousy, vulnerable nerd Ellie. The dowdy-looking but welcome presence of Princess Leia (Carrie Fisher) delights us with some chuckles as the badass, shotgun-toting house mother Mrs. Crenshaw.

For a standard slasher programmer, "Sorority Row" is stupidly entertaining whenever a photogenic sorostitute talks, walks around in a silky nighty and Ugg boots, or gets killed. Lots of snarky dialogue and a black sense of humor, but no more originality than that. Sorostitutes are easy, and horror fans' demands should be, too.