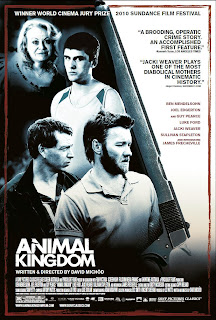 Mate, if you thought the Sopranos were a seriously screwed-up family, then you haven't met the Codys until now in "Animal Kingdom," a gripping, well-acted, beautifully constructed Australian crime drama. Right off the top, Melbourne 17-year-old Joshua "J" Cody (newcomer James Frecheville) sits on the couch next to his passed-out mother, who's dead from a heroin overdose when the paramedics come. From there, he reaches out to his grandmother, a dimunitive, overly doting woman known as Smurf (Jacki Weaver) who's also the household den mother of her three adult cubs who commit heinous crimes. The leader of the family is Pope (Ben Mendelsohn), who's initially in hiding from the cops. Thrust into the crime universe, J. knows his uncles are crooks and sometimes becomes an accomplice to their seedy dealings, but his honesty to a detective (Guy Pearce) might just keep him safe.

This is such an impressively assured film that you'd never guess it was writer-director David Michod's feature debut. The pacing might feel too sluggish for moviegoers expecting a whiz-bang action thriller but the methodical, slow-burn pacing is perfect, and the violence never gratuitous but integral to this harsh, tough world.


Surrounded by such complex, colorfully drawn characters, Frecheville is the most sensitive and subdued, but as reticent as he is playing J., he becomes the emotional core. His emotional breakdown is powerful after his girlfriend is put at risk. The great Weaver is frighteningly sweet and truly chilling as Smurf, an old matron who has nothing without her sons. "Animal Kingdom" is a realistically gritty film that grabs you and captures the gray areas of morality and survival of the fittest which most Hollywood action pictures do not dare touch.