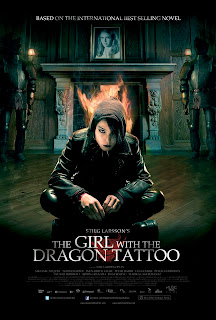 Swedish-Icelandic Noomi Rapace, looking like a punked-out, androgynous Ellen Page, is an indelible discovery. Her Lisbeth, played with a fierce blend of waiflike toughness and vulnerability, is almost more compulsively compelling than the serial-killer story. The mystery still engages and its pieces aren't as dense or lost along the way like, say, "Da Vinci Code," and the suspenseful music score and palpably cold lensing in Swedish locations are addictive. But there is some sordid, unpleasant stuff, namely an ugly rape scene between Lisbeth and her “guardian” just to show his much-deserved (and torturous) comeuppance, and she gets a beatdown by some subway punks. Although more drawn-out than need be for 2 ½ hours like a TV serial, "The Girl With the Dragon Tattoo" is still cleanly plotted and crisply paced. Catch this one before the inevitable Hollywood remake screws it up. 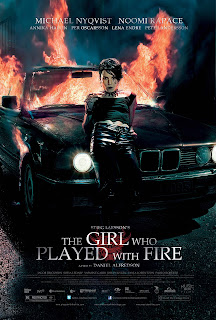 Before David Fincher makes his Tinseltown remake of "The Girl with the Dragon Tattoo," Neil Arden Oplev's film version of Volume 1 in Stieg Larsson's literature trilogy was an international sensation because its casting is so perfect. Now, another Swedish import, Daniel Alfredson sits in the directing chair for 2, "The Girl Who Played with Fire." Although another “Murder, She Wrote” mystery is afoot, this crackerjack back-to-back sequel is more interested in the dark, fire-playing past of the girl with the dragon tattoo, the girl who played with fire...that is Lisbeth Salander. We're still rooting for the alienated, bisexual, psycho-genius-punk hacker who becomes the prime suspect in a triple murder spree of her old sadistic-rapist-pig guardian, and a journalist and his grad-school girlfriend, who were exposing a sex-trafficking operation. While Lisbeth's journalist ally, Mikael Blomkvist (Michael Nyqvist), knows she's innocent, she puts her hacking skills and detective methods to use to clear her name and track down sleazy bad guys.

Fierce and tough as ever, Noomi Rapace is spectacular, naturally slipping back into the avenging-angel role of Lisbeth. Alfredson shows less visual flair in Fire, but the Swedes are still willing to rub our faces in some cruel, brutal violence (cutting down the gratutious rape scene to only a few frames) and adept at building more piercing, mystery-cracking tension. The “men who hate women” (i.e. biker goons and a rock-solid toehead giant who feels no pain) are more backwoods baddies than wealthy aristocrats this time, burying women alive, burning down warehouses, and revving up chainsaws, but always get their just desserts when Lisbeth is around. With a blackmailing rape DVD, L-word steaminess, a "Star Wars"-ish twist, and plenty of lurid Ingmar Bergman atmosphere, "The Girl Who Played with Fire" smolders as a propulsively gripping firecracker of a thriller that'll satiate the appetite of Lisbeth fans in any country. 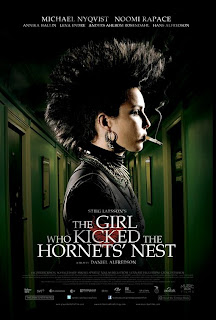 This last chapter in Stieg Larsson's electric Millennium trilogy has the least sting of its predecessors but wouldn't work without "The Girl with the Dragon Tattoo" and "The Girl Who Played with Fire" and still makes for a solid end. Our girl, Lisbeth Salander (the formidable Noomi Rapace), was buried, shot, and left for dead in Fire by her evil father Alexander Zalachenko (Georgi Staykov) and half-brother Niedermann (Mikael Spreitz), but she's a fighter. Now in intensive care, after a bullet is removed from her head, recovering Lisbeth gets ready to face trial on attempted murder charges. Also, Alexander is a survivor and still wants Lisbeth dead, and Ronald is on the run. Meanwhile, Mikael Blomkvist (Michael Nyvist) puts his magazine resources together to prove her innocence with documented proof, as his sister Annika (Annika Hallin) serves as Lisbeth's defense attorney, while a shady, rogue division of Sweden's national intelligence called “The Section” are out to protect secrets and have her committed.

"The Girl Who Kicked the Hornet's Nest," for all its added characters and more talky exposition than action, is still plenty gripping. Like in the last film, this one keeps Lisbeth and Mikael separated for a good course of the story, and Lisbeth herself is more talked about than used in the action, being confined to a hospital room and later a jail cell. Still, Rapace's transfixing, unblinking presence still gives the film its oomph. She makes even smoking a cigarette at the window of her dark apartment resonant. There are more reprehensible bad guys here, Dr. Teleborian (Anders Ahlbom) replacing Nils Bjurman, but we heartily root for his just desserts. And the showdown with freakish, brick-shithouse baddie Niedermann is tense and exciting. Director Daniel Alfredson, who also did the last film, keeps the movie pretty streamlined even with its stop-and-start momentum, but it works in the context of this particular story. Come the time for her trial, which is far from dull, she decks herself out in her dressed-to-kill, dragon-girl raiment (punked-out leather, greased-up mohawk, piercings) with an attitude to match as she remains uninterested in conversation but breaks out in deadpan sparring when spoken to by her prosecutor. If you've followed this intriguing series so far, "Hornet's Nest" should satisfy as a close to Lisbeth Salander, who will surely be missed.