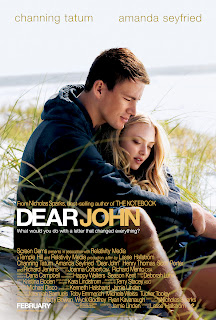 Dear "Dear John," your gauzy, unabashedly sentimental weepie, fashioned by another Nicholas Sparks novel, starts out appealing and then melts into soppy, eye-rolling sap. First and foremost, you know what you're getting yourself into with a Sparks story: an earnest, sun-drenched sweetheart story of deep emotion, sweeping romance, letter-writing, and the Carolinas. A military boy, John (Channing Tatum), and a college girl, Savannah (Amanda Seyfried), find love at first sight within two weeks during their spring break on the South Carolina shore. Unfortunately, he returns for active duty pre-9/11 for another year and she's going back to school. Love means never having to say “see you soon,” and so their correspondences through handwritten letters begin (“John, I want to know everything.”).

Dear reader, try not to tear up.

Seyfried looks gorgeous and she's quite the young actress, doing what she can with a saintly, sketchily written character. But Tatum is the big surprise here: even with his hunky, tough-pretty looks, he still gives a confident performance and works his charisma. And the two leads make a comely, photogenic couple, their chemistry and sensual scenes (making up for PG-13 restraints) feeling natural while the story feels rigged.

"Dear John" does everything in its might to make us shed tears, pouring on the kitchen-sink melodrama with one too many tragedies and way too many montages to keep things moving. The early scenes of young love are sweet and earnest, but once the “dear John” voice-over letters begin, everything goes marshmallowy and throws everything from autism to—why not—cancer and coin-collecting metaphors about life, with a needless plot turn muddling up the romance. The relationship between John and his autistic father, and Richard Jenkins' grounded, touching performance as that father, holds more weight and connects with us rather than the Harlequin war-love story, as does Henry Thomas playing Savannah's timid neighbor with an autistic son.

Director for hire Lasse Hallström shoots most of the romance with a melancholy, even lugubrious softness, but it's so aching-to-be-romantic that it's not passionate enough as "The Notebook." Fine performances, but know this, dear reader: "Dear John" isn't anything to write home about. 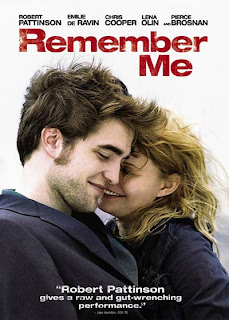 Veteran TV director Allen Coulter and tyro screenwriter Paul Fetters take the road of good intentions for turning historical 9/11 tragedy into something you'll never forget, especially when you're in love. No, "Remember Me" isn't based on Nicholas Sparks corn. In fact it's pretty dour, but it's just that kind of story.

Still sporting the vampire look and brooding, but no body sparkle, a hasn't-showered-in-days-looking Robert Pattinson plays Tyler, an angst-ridden and lost NYC student whose diet consists of beer and cigarettes, has a bad relationship with his suit father (Pierce Brosnan), and is still sad from the suicidal death of his brother. As one of his friends jokes, “I've had enough of this brooding introvert shit.” Then he meets a young woman named Ally (Emilie de Ravin) who has experienced a tragedy of her own, but she's also the daughter of a cop (Chris Cooper) Tyler got punched out by and jailed for a night.

This bittersweet, affecting capital M-melodrama emotionally invests us in Tyler and Ally, and their relationship, helped by Pattinson and de Ravin striking up sexy, palpable chemistry. Pattinson gives a more magnetic performance here than he does in the "Twilight" movies (sorry, Team Edward), and Ravin is spunky and appealing. There are also touching moments featuring wonderful young Ruby Jerins as Tyler's precocious sister, Caroline, who's shunned at her prestigious school. Points of the story come off coincidental and contrived, however, the engaging actors help overcome it. And that tragic, surprising conclusion, which could've felt calculated and gross, packs an emotional punch.