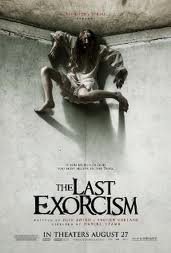 The horror-movie craze of demonic possession and exorcisms first started with "The Exorcist" and it probably won't end with "The Last Exorcism," despite such claims by its title. This faux-documentary horror film, lumped into the "found footage" subgenre, has the disadvantage of being a successor to "The Blair Witch Project" and "Paranormal Activity," but it still delivers its own cool, scary goods through a convincing "this-is-real" illusion.

From a script by Huck Botko & Andrew Gurland, director Daniel Stamm's film introduces Reverend Cotton Marcus (Patrick Fabian), an evangelical showman-minister who has conducted bogus exorcisms for a quarter of his life. Living in Baton Rouge, Louisiana, with his wife and son, Cotton has long lost his faith and knows demonic possession is a total sham, but hey, performing an exorcism supports his family and pays the bills. With a documentary crew—producer/director/boom operator Iris (Iris Bahr) and cameraman Daniel (Adam Grimes)—following him behind the scenes, he answers one last exorcism request that takes him to a farm in Ivanwood. There, naïve, home-schooled teen Nell Sweetzer (Ashley Bell) has been acting strange and her family's livestock keeps getting slaughtered. Her widowed father, Louis (Louis Herthum), just wants his little girl cleansed of the evil that has taken over her body, but her young brother, Caleb (a creepy Caleb Landry Jones), tells the reverend and his crew to leave. Cotton does his thing, claiming Nell to be possessed by a demon called "Abalam" and then "performing" the exorcism (complete with an hidden iPod playing evil groaning sounds and installed smoke puffing out of his crucifix). Once Cotton and his crew get sucked into the Sweetzers' problems, whatever's going on is definitely not a crock and they get way more than they bargained for.

Before the Scary Stuff goes rampant, "The Last Exorcism" begins with a dry sense of humor and amusing observation of religion and Louisiana color. First off, the performances are key. Fabian is perfectly charismatic without actually being arrogant, not only turning up the "fire and brimstone" act as part of his job but also portraying a conflicted man who's faithful in his skepticism. Bell is extraordinary, innocent and empathetic one moment and then eerily "someone else" the next. Although she's not asked to vomit up any pea soup or crab-walk down the stairs, her possession scenes are disquieting. Watching Nell's neck twist and her body contort is a freaky sight, but even merely a shot of the girl standing still at the end of a hallway, perhaps a visual cue to "[REC]" and its U.S. remake "Quarantine," is chilling. Because of these two performances mainly, the film never careens into unintentional parody.

Director Stamm instills a sense of dread with silence and deliberate pacing, amping up the tension, which at times can get so taut that it's guaranteed you'll be covering your eyes or holding your breath. Despite a few shrieky music cues that tell our spines when to tingle, the film can still be startling and frightening. It's also surprisingly intense for a film that garnered a PG-13 rating, and producer Eli Roth must've overlooked the production pretty closely to make sure some blood made the final cut. For instance, the handhand camera is used to bludgeon a cat. Where the film ends up going in the last five minutes offers some disturbingly gutsy revelations, but the finale is kind of a bummer. Though ending on an abrupt, anticlimactic note not unlike "The Blair Witch Project," that doesn't erase "The Last Exorcism" from being an effective, generally understated spooker. Getting released at the end of "dump month" August, this is a shocker in the best sense of the word.