Over and - underrated: Critics loved it, I didn't. Critics panned it, I enjoyed it. 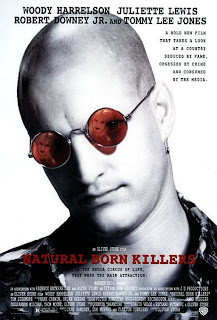 Oliver Stone's excessive, masturbatory filmmaking style—blending all types of film stocks, color filters, animation, tilted angles, and flashy MTV-style techniques—is artistically interesting up until a point that which is utterly annoying. Stone feeds on outrage, like ours, as we watch this gonzo, hectic, and redundant mess become an assault on the senses and the pompous director hammer home his satirical points with a bludgeon to the head (OK, OK, we get it already!).

Quentin Tarantino wrote the story, inspired by the Charles Starkweather and Caril Ann Fugate killing spree from the 1950s, and amid some cleverly disturbing touches by Stone and Co., there's a satirically brilliant “sitcom” bit of Lewis' hostile family life with a manipulated laugh track. Harrelson and Lewis are convincing and frightening, and yet very broad, as the celeb-lovebird-killers, but the rather good supporting cast (Robert Downey Jr., Tommy Lee Jones, Tom Sizemore) does an awful lot of chewing the scenery like there's no tomorrow—who drank the Kool-Aid?

When it's all over, "Natural Born Killers" is much ado about nothing. It's the kind of movie that keeps waving its arms at you, trying to get your attention but ultimately failing. 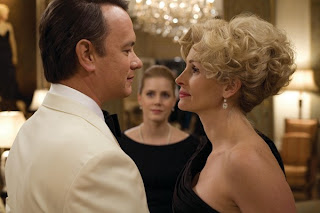 It's saddening to say, but true, Mike Nichols (yes, that Mike Nichols) gives us a glossy, mostly hollow geopolitical satire, based on a true story from "60 Minutes" producer George Crile's 2003 book, and it just feels like a grossly overrated calculation for the big Oscar season.

Director Nichols' noncommittal decision on whether he was making an incisive cautionary tale or a light comedy awkwardly results somewhere in the middle, without making effective imprints as either: it's supposed to be topical entertainment about foreign affairs. Aaron Sorkin's dialogue has snappy wit and the subject matter thought-provoking, however. Hanks is charismatic all the time, but it's hard to buy him in a hot tub with hookers. Roberts is miscast and slides past character into caricature as the sassy Joanne Herring, with only a handful of scenes to play dress-up in a blonde bouffant and meticulously pluck her eyebrows. Amy Adams is underused as Wilson's assistant, but Hoffman is a howling standout as the crude Gust Avrakotos, stealing every scene he's in.

There's a more hard-hitting movie to be made on the subject, but "Charlie Wilson's War" is merely a puff piece. 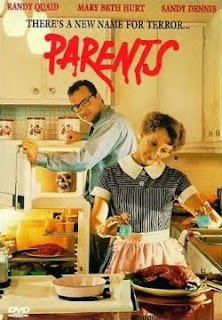 Actor Bob Balaban's feature directing debut happened to be quite undervalued: a strange but clever black comedy that deftly parodies the “Father Knows Best” perception of '50s suburban family life and the horrors of childhood.

In Parents, Randy Quaid and Mary Beth Hurt are hilariously sinister as the highly traditional, perfectly chipper “parents.” As their alienated young son wonders what his folks' leftover meat was to begin with, Quaid with his golly-gee-willikers grin replies, “Before that, they were leftovers-to-be.” And what is going on down in that basement?

The production décor is campy and gives the film a sense of humor about itself, while the material is more deadpan and unsettling.

So morbidly amusing, Parents leaves you to either imagine the parents as murderous cannibals or that their son is hallucinating, seeing food on the table as human flesh. And that vegetarianism is probably the way to go. 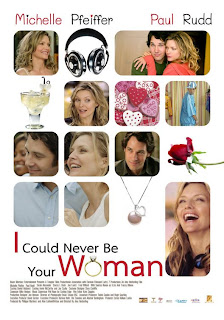 With the talent behind and in front of the camera, it's surprising a sweet and funny picture like I Could Never Be Your Woman would go directly to DVD.

This is an appealing romantic comedy about a fortysomething TV show writer/producer (Michelle Pfeiffer, in a very winning performance) hiring a cut-up of an actor (Paul Rudd, who's in perfect comic form), twenty years younger than she, for her disposable teen show as the ratings begin to slip. He likes her and she likes him, but Pfeiffer can't decide if their age difference is an insurmountable obstacle or not. Meanwhile, her daughter (Saoirse Ronan) is going through puberty and is determined to capture the attention of a male student crush.

Writer-director Amy Heckerling's dialogue is sharp and tart, the stars share a nice chemistry, and young Irish actress Ronan hits every note right on (that includes her American accent) as a curious adolescent.

If there are any major flaws, it's Tracey Ullman as Mother Nature, Pfeiffer's conscience, an occasionally obnoxious and unnecessary character, while Sarah Alexander's kind-of villainess—Pfeiffer's conniving secretary—is a one-note bimbo.

These are desperate times for a good romantic-comedy, but it'd hardly be desperate to see I Could Never Be Your Woman.