"Race to Witch Mountain" races without much charm 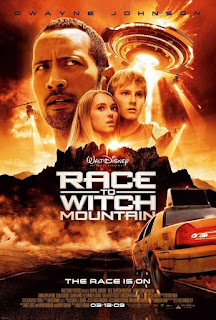 Since Disney's on a roll, remaking almost every live-action Disney-Buena Vista classic ("That Darn Cat," "The Parent Trap," "The Shaggy Dog," "Freaky Friday"), why not a “re-imagining” of the charming "Escape to Witch Mountain" from 1975? Remember the crusty old companion Jason from the original?

Well, it can be assumed that Dwayne “The Rock” Johnson is a modernization on that character, playing skeptical Las Vegas cab driver Jack Bruno. He's a brooding ex-con threatened by a pair of goons right before toeheaded twin aliens, Seth and Sara (Alexander Ludwig, AnnaSophia Robb), who have special telekinetic and telepathic powers, appear in his back seat with a wad of cash and ask Jack to take them to the desert. Tracked by some evil government agents in black, Jack will have to outmaneuver them and deliver Seth and Sara safely to Witch Mountain.

Now Johnson may get a bad rap in the acting department, but lay off, he has high-wattage charisma and a goofy charm, kind of like a meathead Brendan Fraser. Not going over so well are the miscast Tom Everett Scott and David Marquette as agents. Most fun is Kim Richards, the child star of the 1975 original, in a small role as a helpful, friendly waitress. "Race to Witch Mountain" is a benign, speedy race to the finish-line, but a rather joyless kiddie action movie with a lot of frenetic action.