Adam Sandler comedies have grossed up to $163 million at the box-office, but much of that could have been better served to feed starving children. Luckily, suckers for Sandler's headlining movies feed off such lowest-common-denominator humor like it's delicious junk food and get what they pay for. No matter how many clownish, boorish man-children with obnoxious speech impediments/funny voices he plays, a cruise-control act he's put on since 1995's "Billy Madison," there are easily amused audiences that actually eat up this lowbrow stuff. The man has also played sweethearts in "The Wedding Singer" (his best Sandler comedy) and "50 First Dates," and has even given more dramatic turns in "Punch-Drunk Love," "Spanglish," "Reign Over Me," and "Funny People," which called upon him to actually act and not mug. Since then, Sandler has regressed, pumping out dopey, hacky junk under his Happy Madison Productions banner, even if he's capable of better quality (methinks he just doesn't care since he gets to work with his friends and get paid big bucks for it). But let's not come down on Mr. Sandler (or bury the lede of this review) but rather his latest, "That's My Boy," a raunchy, raucous, really R-rated comedy where Sandler gets to play, what do you know, another clownish, boorish man-child and one of the worst movie parents since Joan Crawford. 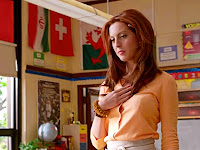 Back in 1984, Massachusetts 13-year-old Donny Berger (Justin Weaver) slept with and impregnated his smokin' hot math teacher, Miss McGarricle (Eva Amurri Martino). After she's sentenced to prison for thirty years, Donny gets custody of their love child, Han Solo, and becomes an overnight sensation, selling his life story for a TV movie. Cut to the present, Donny (Sandler) is facing jail time for failing to pay off the IRS and needs $43,000, quick. His now-grown son (Andy Samberg), having moved out at 18 and changing his name to Todd, tells people his parents died in an explosion, but upon the weekend of his wedding with fiancee Jamie (Leighton Meester) at the Cape Cod home of Todd's boss Steve (Tony Orlando), Todd and Jamie's family get an unexpected surprise. The ill-mannered, beer-swigging Donny shows up, hoping to reconnect with Todd and stage a jailhouse reunion with his still-imprisoned lover and estranged kid on a daytime talk show. Hiding the true identity of his screw-up father, Todd (who's not a chip off the old block) wings an excuse that Donny is really his best friend, and hilarity ensues.

Directed with technical proficiency for a Happy Madison comedy by Sean Anders (2008's good-natured, ribaldly funny teen-sex comedy "Sex Drive"), "That's My Boy" is a lot less painful than Sandler's last arm-gnawingly noxious and unfunny vehicle, last year's "Jack and Jill" (someone's pick of the year's second worst movie). Then again, it still doesn't warrant a full recommendation. If there's any reason the movie isn't completely terrible, it could be that Sandler's consistent collaborator Dennis Dugan isn't directing, and that the screenplay was written by one soul, not a committee, and that soul not being Sandler himself. David Caspe, the creator of ABC's series "Happy Endings" (one of the funnier riding-on-the-coattails-of-"Friends" relationship sitcoms), has a way of throwing in a few ticklishly funny one-liners that, in spite of knowing better, should make the viewer chuckle anyway. And in one of the movie's better extended comic set-pieces, Todd's best man Phil (Will Forte) takes the groomsmen to a spa, his idea of a bachelor party, until Donny shows them all a wild, good time at his strip-joint hangout.

In order to tolerate the level of comedy here, one must get through the skeevy, inappropriate setup for what's basically a Mary Kay Letourneau-like case of statutory rape. Watching a late-twentysomething teacher seduce a green teen, followed by a deer-caught-in-the-headlights scene of the unlikely couple fornicating on a piano, is pretty icky, especially as comedy. From there, the film earns its R-rating, as all of the jokes revel in the baddest of bad taste, like the mentality of a 15-year-old boy with a boner for a brain, but you probably already knew that. Otherwise, "That's My Boy" holds no pretensions that this is anything more than a lewd, immature comedy. It's predictably stupid, vulgar, sexist, phonily sweet, and yet…and yet…sometimes the base, sophomoric, hard-R humor garners some guilty laughs that could be counted on one hand and maybe a few more fingers.

Sandler is obviously having the time of his life as Donny, putting on a slobby Boston accent, never functioning without a beer in his hand, and screaming "Wazzzup!" any chance he gets. If there's any inner sweetness to such a smarmy, irresponsible character, it's Sandler's doing, but Donny isn't much of a guy to root for, long before his about-face (because family is important!). Onto his third lead role after 2007's fizzling "Hot Rod" and this year's yet-to-be-released "Celeste and Jesse Forever," Samberg still hasn't found a project worthy of his comic timing and natural charisma that have been brewing during his seven-year and still-present stint on Saturday Night Live. As Todd, he has only to react as the straight man, so nebbish and anxiety-ridden that he has to carry around a pair of "security underwear." Meester, as Todd's bride Jamie, gets to be a demanding, shrewish bridezilla, and a third-act twist doesn't do her any favors. Vanilla Ice gets to play himself, as Donny's best bud. He's not much of a comedian, but gets to poke fun at himself and urinate on himself, so that's good. In the best bit of casting, Susan Sarandon (Martino's mother) gets to make a donut with her finger on a glass partition as Sandler tries poking his finger through it. There's no need to elaborate on the rest of the cast, except to say that James Caan, Milo Ventimiglia, Blake Clark, Will Forte, Rachel Dratch, Nick Swardson (at his unfunniest), Luenell, Todd Bridges, and Ana Gasteyer also appear.

If the prospect of seeing Sandler use up a whole box of tissues and masturbate to a picture of a grandmother tickles your funny bone, have at it. The rest is pretty scattershot, gags involving handjobs, sticky semen, baseballs to the face, a heavy-set stripper eating breakfast upside down on a pole, Chinese housekeepers flipping the bird, and a character sliding over a car hood and pratfalling. A long-running joke of the often-recited greeting "Wazzzup!" (from the early-2000s Budweiser commercial campaign, mind you) seems very dated, but a whole handful of cast members deliver it with tongue-wagging enthusiasm. The worst flub of all is a "shocking," creepily unfunny incest subplot coming out of left field, where Sandler's Donny even reacts with disgust. It's merely there to force another tasteless gimmick and add more conflict that artificially mends the estranged father-son relationship. Then there's the running time, 114 minutes (yes, 1 hour and 54 minutes), and there's absolutely no reason for a silly comedy to go on that long.

Protectors of Sandler can breathe. "That's My Boy" doesn't really generate enough hatred to earn a knee-jerk place on Worst of 2012 lists, but it's an apotheosis of mediocrity. It's not choicy nor is it depressingly unpleasant or utterly laughless to choose a colonoscopy over sitting through it. Sometimes that's enough praise for a Happy Madison joint, so we take what we can get. However, if Sandler wants to make something more of himself as an actor, he's better off working with Paul Thomas Anderson, James L. Brooks, or Judd Apatow again. For now, he's just playing around in the sandbox, rehashing his same old, infantile shtick, even if anyone under 17 requires an accompanying parent or adult at the theater this time.