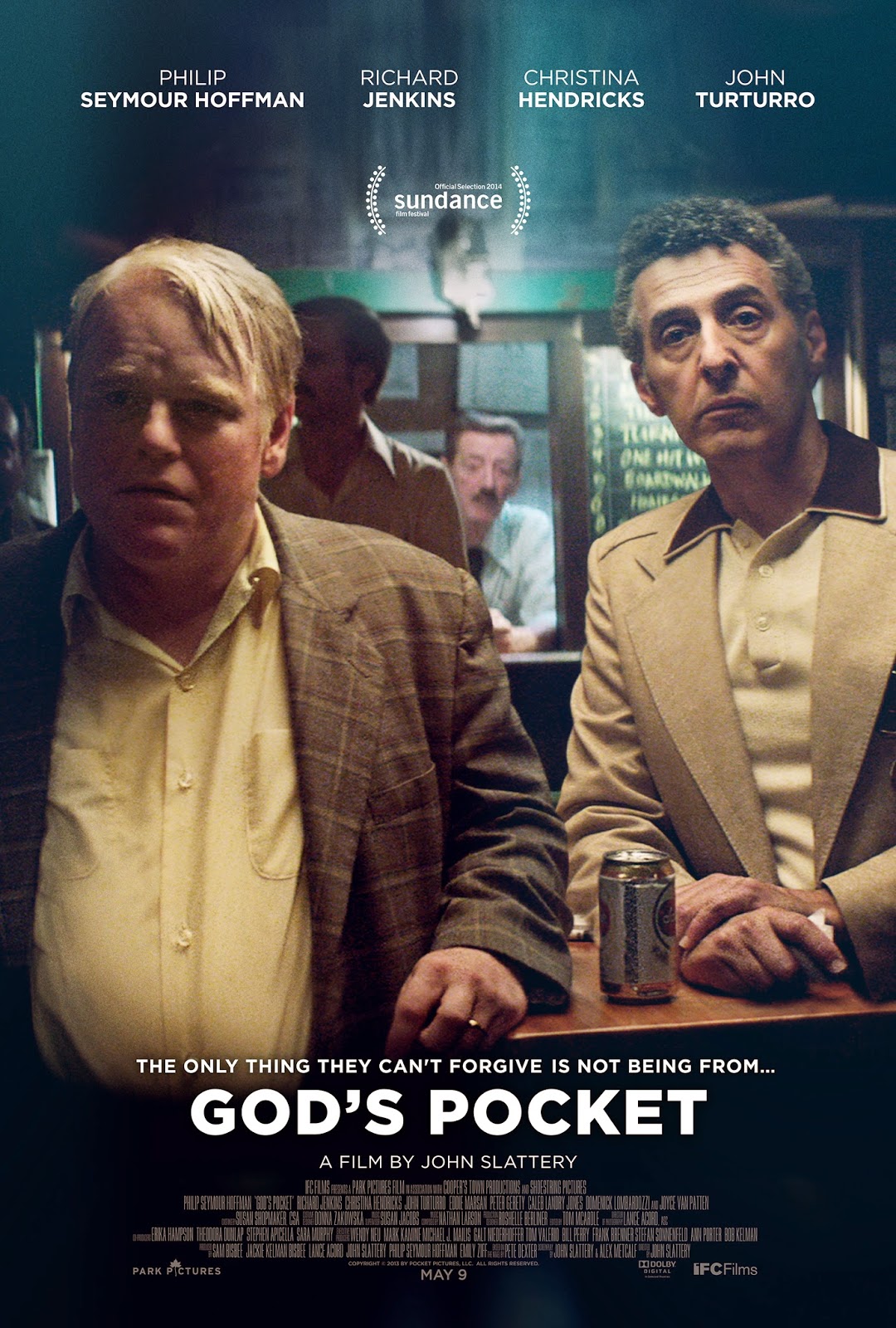 There is certainly nothing negative to say about the acting in "God's Pocket," the feature directorial debut of "Mad Men" actor John Slattery and one of the late Philip Seymour Hoffman's last films. If anything, the performers elevate nomadic material and dull direction. A working-class town-set film cannot not be grim and unforgiving, although this one is just ceaselessly bleak, wallowing in the characters' hopeless, booze-soaked misery, while failing to compel all the way. Many films, most recently "Winter's Bone," "Mud," "The Place Beyond the Pines," "Out of the Furnace" and "Joe," have been masterclasses in capturing a sense of time and place, while "God's Pocket" depicts its milieu in the broadest of strokes. Everyone gives it their all, but the film itself never knows what chord to strike, despite a few darkly comic moments and outbursts of brutal violence (an eye-gouging scene can't be unseen).

In the seedy, blue-collar Philadelphia neighborhood where everyone knows everyone else's business, non-local Mickey Scarpato (Philip Seymour Hoffman) drives a truck of stolen meat to support his bosomy wife, Jeanie (Christina Hendricks). When the off-putting, razor-wielding Leon Hubbard (Caleb Landry Jones), Mickey's stepson and Jeanie's 23-year-old boy from a previous marriage, is inadvertently killed at a construction site by an old black man for his racist threats, Jeanie has a gut feeling that there was foul play, even though the construction boss and other witnesses tell the police it was an accident. After Leon's death leaves his wife in mourning, Mickey loses out on a horse bet with partner-in-crime Arthur (John Turturro), so he can't pay mortuary owner Smilin' Jack Moran (Eddie Marsan) for the funeral arrangements. Meanwhile, news journalist and womanizing drunk Richard Shellburn (Richard Jenkins), who has spent his career writing about God's Pocket, sees a good human interest piece in Leon's death and tries seducing Jeanie.

Adapted from Peter Dexter's novel—the Richard Shellburn character is the author's fictional surrogate—by Slattery and co-writer Alex Metcalf, "God's Pocket" seems to have all the right ingredients without coming together or reaching a narrative zenith. After helming five episodes of "Mad Men," director Slattery takes a shot behind the camera, with the authenticity of the scummy God's Pocket occasionally bleeding through from Lance Acord's appropriately drab lensing and lived-in production design, but he lets all sense of tone get away from him. More so, the film seems to forget what story it's telling and whom we should be following. The characters aren't rendered as flawed human beings as much as they're "dirty-faced" caricatures who all drink like fishes. There's no mystery to Leon's death that the audience doesn't already know (and he's the kind of reprehensible scum that won't be missed), so the film dips into the lives of the other characters. If the story belongs to Shellburn, the ending holds no impact at all.

The film is blessed with a star-studded cast, although not everyone is given equal chance in doing much with their respective roles. In one of his final performances, Philip Seymour Hoffman is very good at playing another pained, desperate type, only his Mickey Scarpato is fleshed out as more than just a type. As his wife, Christina Hendricks is fine but miscast and mostly left to her own devices. Richard Jenkins is an on-the-nose conduit as the hypocritical Richard Shellburn, who lets us know, "It's a cold world." John Turturro and Eddie Marsan can always be counted on to add color, and Joyce Van Patten is warm and a hoot as Arthur's Aunt Sophie, who runs a flower shop and packs some heat. Writer-director Slattery seems to patronize the town's denizens, finding them all to be pathetic bar flies, and his attempts at morbid laughs are tone-deaf, especially when Mickey drags around a stiff corpse through an alleyway. Author Peter Dexter's involvement with 2012's "The Paperboy" (he wrote the book) worked, as much as a mess as it was, but that film was compulsively watchable, whereas "God's Pocket" is a bit of a bore.