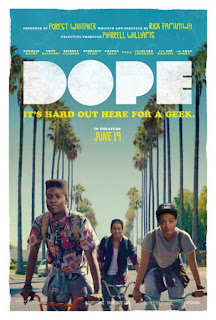 Debuting at the 2015 Sundance Film Festival, "Dope" received several offers from production companies and studios before being sold to distributor Open Road Films. Everyone must have seen something special and seen it as the fresh, joyful, vibrant little indie that it is. You can't help but root for this summer coming-of-ager, which also counts as an upward slope for writer-director Rick Famuyiwa, who took a hiatus for good reason after his 2010 flop, the hysterically lame "Our Family Wedding." Positioned next to fellow summer coming-of-ager and Sundance indie darling "Me and Earl and the Dying Girl," this is the one that actually deserves attention. It's certainly rough around the edges, but for a '90s-esque teen comedy set in a violent urban neighborhood, making digs at cultural appropriation, and getting the ball rolling with a drug deal, it deftly walks a tightrope most of the time. In a way, "Dope" reminds one of "Risky Business" but has its own distinct voice to slightly subvert the formula.

Obsessed with 1990s hip-hop culture and sporting a Kid 'N' Play high-top fade, Malcolm (Shameik Moore) is a geeky straight-A student who's applied to Harvard but for now lives in an Inglewood, Calif., neighborhood called "The Bottoms" with his bus-driving single mother (an underused Kimberly Elise). He's in a punk band called "Awreeoh" (sounds like "Oreo") with his two best friends, 14% black Jib (Tony Revolori) and lesbian Diggy (Kiersey Clemons), who can't get through high school without getting bullied. When they're surprised to get into a drug dealer Dom's (rapper A$ap Rocky) birthday bash after being invited by Malcolm's crush, college-bound Nakia (Zoë Kravitz), a shoot-out ends the party. The next morning after escaping, Malcolm discovers $100K worth of Molly and a gun have been stashed in his bookbag, but he's already being pursued by another dealer.

For 103 minutes, "Dope" keeps up its breakneck pace and never wastes a scene or character. It benefits greatly from energetic direction, with rewinds and a voice-over narration by Forest Whitaker, and likable performances. 20-year-old Shameik Moore is a revelation as Malcolm, instantly charismatic and earnest yet confident. In a madcap comedy, it helps to have characters grounded in reality, and Malcolm is a bright protagonist. In a funny, unexpected misadventure Malcolm finds himself in, drop-dead gorgeous model Chanel Iman has no problem getting naked and looking ridiculous for a viral YouTube meme as a drugged-up sexpot. It would be easy for everyone to be a stereotype, but writer-director Rick Famuyiwa takes care of that, too. As the college essay framework has seemingly become the new staple for coming-of-agers, what with "The Spectacular Now" and "Me and Earl and the Dying Girl," it sets up the film's resonant themes about race and class. The change in tone is jarring at first and a bit preachy, but it's also clever and moving. Finally, the soundtrack is simply infectious, including early-'90s hits like Naughty By Nature's "Hip Hop Hooray," Black Sheep's 'The Choice Is Yours," and the three leads' fictional band Awreeoh's songs (written by Pharrell Williams). A refreshing summer break from robots and superheroes, sequels and reboots, "Dope" is, indeed, dope — and the good kind.