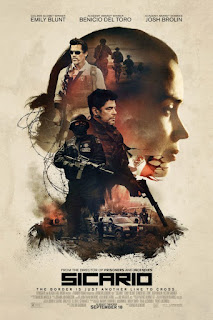 Other films have tackled the war on drugs, none of them much like Steven Soderbergh's sprawling "Traffic" in 2000, until one experiences the gripping, mercilessly blunt force of "Sicario." Whether it be 2013's gut-wrenching morality play/police procedural/kidnapinf thriller "Prisoners" or 2014's tantalizingly twisty puzzle box "Enemy," French-Canadian director Denis Villeneuve is on the fast track of becoming one of today's most interesting filmmakers who resists conforming to studio norms. He operates on more ambitious levels than most and helms this purposefully grim and ugly material with the know-how to use the talents of his collaborators to their fullest capabilities. He knows how to craft a mood in the service of thematically complex and unsparing storytelling that favors moral ambiguity and exploring the heart of darkness. "Sicario" is not only a taut, grimy hornet's nest of a thriller shrouded in urgency and threat but a cagey morality tale told with plenty of gray shadings and deeper implications in place of finite answers.

Busting through the wall of a suburban house in Chandler, Arizona, FBI agent Kate Macer (Emily Blunt) and her partner, law-school grad Reggie (Daniel Kaluuya), lead a kidnap-response team into a routine drug raid. What awaits is a chamber of horrors with plastic-wrapped cadavers hidden behind the drywall and a lethal booby-trapped explosive in a backyard shed. With rookie ideals that are by-the-book, Kate is a "thumper" who always gets the job done and she's ready to stop the Mexican cartel. In no time, she's singled out to join a task force, led by shadowy Department of Defense "adviser" Matt Graver (Josh Brolin) and the even more shadowy Alejandro (Benicio Del Toro), to find the drug lord in charge. When Kate is taken to Juárez, Mexico, instead of El Paso, she's kept in the dark and wants to know their objective, while her "colleagues" make moral compromises for something far more personal that put her in a quandary.

From a debut screenplay by actor Taylor Sheridan, "Sicario" (that's Spanish for "hitman") commands attention from the intense first frame of the brutal raid and grisly discovery and rarely lets up. In using Kate as a conduit into the horrors of this deadly world, the film withholds information from both her and the viewer without much hand-holding. Even when the film changes gears and more or less sidelines Kate's point-of-view for someone else's, the film keeps buzzing with tension, even during mundane mornings with Juárez cop Silvio (Maximiliano Hernández) seen having breakfast with his family and promising his son to attend his soccer game. This subplot involving Silvio serves as a snapshot of the everyday atrocities the families in the Mexican city experience, but the purpose of it only comes into focus once the clandestine mission Kate suspects (as well as the meaning of "Sicario") is revealed. Denis Villeneuve's film effortlessly fires on all cylinders on a technical level, too, from every frame of the you-are-there stir captured in master Roger Deakins' cinematography to the encroaching portent in Jóhann Jóhannsson's nervy, foreboding score to Joe Walker's precise, propulsive editing that proves top-notch action filmmaking is not dead. Starting with Kate's convoy ride through the lawless Mexican streets with the sight of hanging corpses being a typical occurrence, a rattling set-piece in bumper-to-bumper traffic at the Juárez/El Paso border crossing is a masterclass in unbearable white-knuckle suspense and dread. Even before the scene erupts into a blood-spattered shoot-out, it forces one to hold his or her breath as often as one did when the Great White Shark hunted his hunters from below the ocean's surface in "Jaws." A later sequence is the best any film, next to 2012's "Zero Dark Thirty," to skillfully employ night vision and infrared lenses as the operatives are stunningly silhouetted in the sunset before venturing into the cartel's cocaine-running tunnel.

A long way from the sharp-tongued fashion magazine assistant in "The Devil Wears Prada," Emily Blunt assuredly mixes hardened resolve and vulnerability as Kate Macer in her first role that adds to the physicality she proved in last year's overrated "Edge of Tomorrow" but steers herself into darker and more contemplative places. We don't learn a lot about Kate, except that she's divorced, in need of a new bra, and picking back up smoking, but the film also treats Kate as a human being and not just a pawn. She's a woman with agency in a man's world, much like Jessica Chastain's CIA targeting analyst Maya in "Zero Dark Thirty," and our single moral compass. Kate may be a little naive, but she's intelligent, tough, and laser-focused enough to know that the truth awaits her. As morally murky Colombian prosecutor-turned-gunman Alejandro, Benicio Del Toro brings a quiet, mysterious intensity to a role he plays close to the vest and then ultimately turns into a haunting tragic figure. Considering the film rests on circumstances that are dangerous and frightening, Josh Brolin does sprinkle in plenty of jocular levity to keep the film from falling dead into humorlessness as laid-back, flipflop-wearing government operative Matt Graver. The ubiquitous Jon Bernthal also makes a memorable imprint as a cowboy who seduces Kate in a bar.

A searing thriller elevated to the max as a sensory experience, "Sicario" may be director Denis Villeneuve's most lucid and accessible film, but he still approaches it as he does his previous features with a fascination into the darkest depths of human nature. When Villeneuve and screenwriter Taylor Sherian concentrate on the wearying toll such an operation has on the idealistic Kate, the film is at its most fascinating. It then culminates in catharsis for Kate and a hopeless look in the face of the borders between right and wrong, but taking the moral high road is easier said than done in this "land of wolves," as one character calls it. Stomping on any glimmer of hope or ethical purity and being more powerful for it, "Sicario" is bleak as hell but darkly enthralling.