He'll Get You, My Pretties: Dopey "Last Witch Hunter" bogged down by ugly effects and clunky script 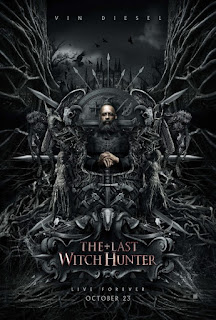 It is no secret that Vin Diesel has an affinity for horror-action fantasies because, after playing an escaped convict with the ability to see in the dark in three movies ("Pitch Black," "The Chronicles of Riddick" and "Riddick"), he's now ready to play a centuries-old, witch-slaying badass in, what do you know, "The Last Witch Hunter." This $90-million supernatural action-fantasy is goofy, C-grade malarkey, for sure, but it gets one wondering where all those millions went. Though the film is burdened with some of the junkiest and most visually ugly special effects seen in a big-budget theatrical release, the end product is more of a blah mediocrity than Uwe Boll levels of bad. That may be damning with faint praise, but take that as you will.

In a dark period during the 13th century, valiant warrior Kaulder (Vin Diesel) was cursed twofold by the Witch Queen (Julie Engelbrecht), who killed most of mankind, including Kaulder's wife and daughter, with the Black Plague. Then, right before he slays the witch, she curses him once more with her own immortality. 800 years later in 21st-century New York (actually Pittsburgh), where witches live among the humans and have made a truce to never use magic on them, Kaulder is the last of his witch-hunting kind. When he's not sleeping with pretty flight attendants and driving his sleek Aston Martin (boy, immortality is cruel), he's in cahoots with a shadowy organization, aligned with a brotherhood of priests, called Axe & Cross. Kaulder's mentor, Dolan the 36th (Michael Caine), is suddenly placed under a death curse from black magic, but a younger successor, Dolan the 37th (Elijah Wood), is branded and assigned to protect Kaulder. Along the way, they meet Chloe (Rose Leslie), a good witch with the gift of "dreamwalking," and with her help, they can get closer to killing the warlocks who are responsible for trying to resurrect the Witch Queen.

Directed by Breck Eisner (who seemed more assured with 2010's "The Crazies") and written by Cory Goodman (2011's "Priest"), Matt Sazama & Burk Sharpless (2014's "Dracula Untold"), "The Last Witch Hunter" gets off to such an awful start that it's surprising how generally diverting it can be when it actually tries, even as it's consistently dopey. When we first see Vin Diesel's Kaulder, he's bearded—a sight that fortunately (or unfortunately?) isn't as laughable as Nicolas Cage's blond ringlets in 2011's "Season of the Witch"—and venturing into a cave to kill the Witch Queen. Everything is drably lit, as it would be in a dark cave owned by maggoty-faced witches entwined with vegetated tendrils, but the cinematography is so dreary and the cutting so choppy that most of the action set-pieces become barely comprehensible messes of pixels and fire. If the screen didn't continue to be so flooded with chintzy, unimpressively rendered CGI, like a digital storm of flies, the film might hold more palpable danger and threat, but it seems director Eisner wanted to just up the cheese factor.

Vin Diesel is an intimidating enough presence in any action role he takes on and he throws off a few quippy lines here and there, but as 800-year-old Kaulder, there is no sense of the toll his immortality has taken on him. Sure, he has mournful dreams of his late wife and daughter, but it's difficult to care for this immortal (and indestructible) man who seems pretty comfortable with his new playboy lifestyle. One would be less surprised if Nicolas Cage were cast as a witch hunter, but even Diesel has been more charismatic in his seven "Fast and the Furious" movies than he is here. As weathered priest Dolan 36th, Michael Caine is obviously too much of a class act for this schlocky material. He's merely on hand for exposition duties and giving fatherly advice to Kaulder as if he were replaying Bruce Wayne's butler Alfred in Christopher Nolan's Batman films. Hopefully that paycheck was nice. As Dolan 37th, who was once saved by Kaudler as a kid when his parents were killed by a witch, Elijah Wood mostly looks like a deer in the headlights. After he's introduced and seems like he'll figure more into the proceedings, Wood disappears, only to later be involved in an eye-rolling twist. As Chloe, who just wants to live a regular witch's life running her bar of magical elixirs before it burns down, Rose Leslie (2014's "Honeymoon") is one of the few bright spots, coming off the most committed and carrying herself with more charisma and spark than anyone else. She makes the film more tolerable than it has a right to be.

Though it's not based on a graphic novel or a cult trading card series, "The Last Witch Hunter" is creatively uninspired fan fiction posing as an original fantasy-adventure property, aside from the stray moments of inspiration (a boy is led to a colorful tree of gummy bears) and amusement in a clunky script ("You look like a terrible band from the '80s," someone comments on a council of good witches). Otherwise, the overcooked plot doesn't so much develop as it jumps from one exposition dump to another, as if a little boy were telling a story with a lot of "and then this happened…," which just becomes tedious after a while. It will probably still please anyone who likes "Dungeons & Dragons" and the like, but overstaying its welcome at 106 minutes, "The Last Witch Hunter" hopefully doesn't lie that this is the last.