Turtles 6.0: "Out of the Shadows" a slight improvement but still only sporadically diverting 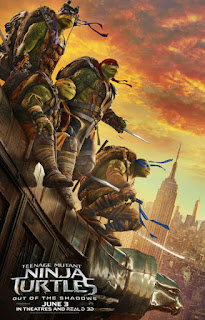 2014 brought the soulless, cynical, pretty boring live-action reboot “Teenage Mutant Ninja Turtles,” the fifth feature film in the franchise. It didn’t matter that it was more nostalgia-driven product than movie—and not as much fun as it must have thought it was when watched without rose-colored glasses—because it grossed $493 million worldwide and there’s a sequel. Two years later, “Teenage Mutant Ninja Turtles: Out of the Shadows” is still junk food, only sporadically diverting but not a complete headache this time. The jokey interplay doesn’t fall as flat as a manhole cover. The action set-pieces aren’t as chaotic. The plot is more engaging. The turtles themselves are also less creepy-looking. Slight improvements will be taken where we can get them.

A year after saving New York City from villain Shredder (Brian Tee) and the Foot Clan crime syndicate, the crime-fighting turtles—leader Leonardo (Pete Ploszek), muscular Raphael (Alan Ritchson), brainy Donatello (Jeremy Howard) and pizza-loving Michelangelo (Noel Fisher)—have to remain in the shadowy sewers until the sun goes down, while former news cameraman Vern (Will Arnett) gets all the credit, per his agreement with them. When April O’Neil (Megan Fox) discovers scientist Dr. Baxter Stockman (Tyler Perry) might be in cahoots with the Foot Clan to break Shredder out of police custody, her teenage ninja pals get a call. Somehow, Shredder’s dastardly plan involves a teleportation device, Stockman’s canister of purple ooze that can alter a human being’s DNA into something mutant, and a blobby alien-brain-inside-a-robot’s-chest named Krang (voiced by Brad Garrett) who wants to open a portal to end human civilization. With recently fired corrections officer Casey Jones (Stephen Amell) coming to April’s aid while on the hunt for two of Shredder’s henchmen, the four brothers will have to force themselves out into the public eye in order to protect the city again.

As inherently silly as Kevin Eastman and Peter Laird’s comic book creation, “Teenage Mutant Ninja Turtles: Out of the Shadows” is goofier and more jocular rather than overly gritty or lame. Whereas the turtles’ last adventure was too violent for kids and too childish for adults, this follow-up does find a bit more fun from time to time. In Jonathan Liebesman’s stead is director Dave Green (2014’s “Earth to Echo”) and, aside from Evan Daugherty getting the axe, screenwriters Josh Appelbaum & André Nemec return. While its predecessor had exactly one stylish action highlight on a snowy mountain, Green executes a couple entertaining set-pieces. Early on, the turtles hurl manhole covers at Shredder’s prison convoy during a high-speed freeway chase, and another involves a cargo plane jump without parachutes and continues to the river rapids. The turtles’ encounter with Casey is amusing, their introductions get a game-show jingle and canned laughter, and there is a Jason Voorhees reference. Less amusing: Shredder’s fellow prisoners, Rocksteady (WWE wrestler Stephen “Sheamus” Farrelly) and Bebop (Gary Anthony Williams), are an obnoxious pair, particularly once they turn into a rhinoceros and warthog, respectively. From there, their dopey wisecracking shtick consists of flatulence and high-fiving one another for their penis enlargement.

For whatever reason, the turtles fare a little better two years later. For one, they’re less aesthetically off-putting and more distinguishable by their personalities. That Mikey wants to be part of the human world, with there being a possibility that the ooze could make them all human, also adds some actual conflict within their brotherhood. Megan Fox is more of a supporting player than she was in the first movie, and again, she looks like an airbrushed model at all times. April gets to use her body to get what she wants, undressing into a schoolgirl outfit, but she also gets to kick some butt. As hockey-playing vigilante Casey Jones, Stephen Amell (The CW’s “Arrow”) is a charismatic addition, but otherwise, the rest of the humans are a mixed bag. Tyler Perry is never once funny as a geeky mad scientist. As tightassed, disbelieving NYPD Chief Rebecca Vincent, Laura Linney probably never knew she’d once act opposite ninja-skilled talking reptiles in her film career—was she blackmailed into accepting this thankless role?—but she’s about as committed as one could be without looking transparently above it all.

With a marginal uptick in quality over its 2014 predecessor, “Teenage Mutant Ninja Turtles: Out of the Shadows” is directed with a lighter hand and, thankfully, more in step tonally with the original comic-book vision than a self-serious Michael Bay production. It’s still not much more than harmless, but there is more sweetness and enough spirit and personality here that one would have to be a real grump to get bent out of shape. This is the kind of “Teenage Mutant Ninja Turtles” movie that fans will eat up with a pizza pie, while the non-fans can at least sit back and not have such an awful time. Not quite a “cowabunga!” but maybe there’s more hope for lucky number seven.