Going Claws Out: "Logan" bows out with gnarly viscera and lasting pathos 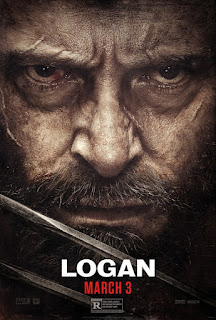 Skeptical audience members who didn’t think they needed to see Wolverine claw his way back into the big screen shouldn’t be blamed. Now, having seen the finished product of “Logan,” there is no reason to worry about it being a homogeneous retread of every “X-Men” movie from 2000 to 2016. It would be hard to imagine after watching Hugh Jackman return to this iconic Marvel character for 17 years that the focused, fittingly final entry would be able to reinvigorate the series and take more risks than one might expect. At once a western, a road picture, a meditation on mortality, and a closing character drama, “Logan” is blessed with an R-rating, lasting pathos, and deadly serious stakes without being humorless. It’s adult-oriented, angry, and visceral but also emotionally resonant.

It’s 2029 and evolution in new mutants has decimated, leaving the future hopeless. Scarred, salt-and-pepper-bearded Logan (Hugh Jackman) isn’t getting any younger, working as a limousine driver in a Texas town and holing up in an abandoned smelting plant on the Mexican border. After spending each night working, he’s also a caretaker, coming home to his desert hideout with black-market medicine to help ailing Charles Xavier (Patrick Stewart) and albino mutant Caliban (Stephen Merchant), who’s fatally allergic to the sun. During one of Xavier’s many seizures, he insists to Logan that there is one young mutant out there. Then, when Logan gets a call from a motel, he finds a nurse, Gabriela (Elizabeth Rodriguez), who pleas Logan to drive her and a special young girl named Laura (Dafne Keen) to an idyllic Canadian safe haven known as Eden. Logan refuses at first, until cold-blooded mercenary Donald Pierce (Boyd Holbrook) and mutant creator Dr. Zander Rice (Richard E. Grant) show up, ready to exterminate all remaining mutants.

If what can be viewed as a standalone picture (even though nothing with the Marvel name can exist in a vacuum), “Logan” refreshingly begins and ends with its own story to tell. Loosely adapting Mark Millar and Steve McNiven’s comic book “Old Man Logan," director James Mangold (2013’s “The Wolverine”) returns to helm this third solo Wolverine picture, co-writing a script with Scott Frank and Michael Green (2011’s “Green Lantern”) that’s meaty yet lean. The western sensibilities extend to a direct reference to 1953’s “Shane,” but 2016’s Jeff Nichols-directed sci-fi road movie “Midnight Special,” wherein a man and a gifted boy go on the lam, comes to mind even more. The “X-Men” comics actually exist in this world, and in a clever touch, Logan debunks the validity of the comic books and mutant refuge Eden. The action is breathless, unapologetically brutal, and gnarly with an unflagging pulse; like anything in “John Wick” or its sequel, nothing is off-limits. Mangold efficiently shoots each scuffle in a way where every hit and goring hurts and never edits them to death. Right out of the gate, the film quickly announces its restricted MPAA rating as Logan savagely takes care of a group of carjackers outside his limo. One major set-piece from an ambush on Logan’s lair is thrillingly staged. There’s also a dose of 1991’s “Terminator 2: Judgment Day” with a killing-machine clone in a farmhouse-set sequence that’s as horrific as anything found in a home-invasion horror film, and a climactic chase where a group of young mutants evade the military through the forest to get to Canada is all the more urgent in today’s times. If there is anything to nitpick, the format of one particular video on a cell phone left for Logan to find makes little sense, as it’s cut and narrated like a documentary.

Seemingly having nothing more to add, Hugh Jackman actually finds the most emotional layers and puts every inch of his heart and soul into Logan, a role that one couldn’t see being played by anyone else. He’s in a different place, weary, past his prime and close to dying. Jackman is all in, being prickly but not emotionless and playing a killer who’s still a flesh-and-blood human. Wolverine has always been an intrinsically violent character, and this time, he gets his claws red. Reprising his role as Charles Xavier, Patrick Stewart never misses a beat and brings even more of a paternal warmth and damaged nuance to this character (and hearing him swear has a cathartic release). As the mute and somewhat feral Laura, 11-year-old Spanish newcomer Dafne Keen blows one away. A true find, she can snag a laugh and express so much without saying a word, as her character goes to emotionally mature places over the course of the film. Also, in all the times Laura fiercely takes out a group of henchmen, Keen gets to be a badass dynamo, showcasing her background in gymnastics and aerial arts for the fight choreography. Seeing Laura/X-23 get her own spin-off series with Keen would not be out of the question. Character actor Boyd Holbrook (2016’s “Morgan”), always making an impression whenever he shows up, is effectively smarmy as enforcer Donald Pierce. Eriq La Salle and Elise Neal also make deep imprints when they figure late into the proceedings as a couple living on a farm with their son (Quincy Fouse) and letting Logan, Charles and Laura stay with them for the night.

With the creative leeway that comes with a much-appreciated R-rating, “Logan” sees director James Mangold putting a lid on the Wolverine saga in startlingly brave and unexpectedly poignant ways. Grim and fatalistic but not exactly gratuitous, the film rarely pulls any of its punches and never follows a fan-service checklist. Jackman reportedly pushed for an R-rating, and it was well-deserved, taking after 2016’s “Deadpool,” itself an installment in the “X-Men” canon. There is also something to be said for a 136-minute film that never feels that long. Out of every cinematic event that has sprung from the panels of the Marvel comics to the screen, "Logan" deserves a place in the upper echelon. It's a film that lets its retractable-clawed hero be human at last, and what an exhilarating, reverberating swan song.