Space Horrors: "Life" carried out with enough skill and tension to stand out 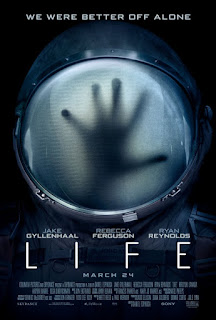 With any new space-set horror thriller, it’s hard not to stop thinking of 1979’s “Alien,” the granddaddy of the genre. “Life” is derivative, sure, but if it’s a rip-off of that Ridley Scott-helmed mainstay, this is one of the more potent and effectively executed rip-offs. That it works so well is due in no small part to director Daniel Espinosa (2012’s “Safe House”) carrying it all out with so much skill, craft, and tension. Nothing comes bursting out of someone’s chest, but there is plenty of startlingly icky spectacle and show-stopping suspense to come close to rivaling that bravura example of horror and get one’s heart racing. There’s so much good in “Life” that it’s able to stand out from the like-minded crowd.

A six-person crew of the International Space Station is on a mission through space to make an exciting breakthrough. The two Americans are smart-aleck pilot Roy Adams (Ryan Reynolds) and medic David Jordan (Jake Gyllenhaal), who prefers life in space than on Earth. The British members are Miranda North (Rebecca Ferguson), who’s in charge of quarantine protocol, and biologist Hugh Derry (Ariyon Bakare). There is also a Japanese system engineer, Sho Murakami (Hiroyuki Sanada), and Commander Kat Golovkina (Olga Dihovichnaya). When they retrieve a sample from a damaged probe on Mars, it contains an extraterrestrial life form that thrills the crew and schoolchildren on Earth. The single-celled organism, dubbed “Calvin,” is described by Hugh for being, “all muscle, all brain.” From there, “Calvin” can only grow stronger, more intelligent and more hostile because, as one of them says, it needs to kill to survive, but someone will have to live to make sure it doesn’t reach Earth.

In a film like this, it is key that the viewer can care about the characters before they get picked off one by one. Screenwriters Rhett Reese and Paul Wernick (2016’s “Deadpool”) only bring functionality to establishing background details for a few of the characters—Sho has a wife and newborn baby back home, and David is something of a sullen misanthrope—that it feels like a missed opportunity more time wasn’t taken to develop them, even efficiently with a few extra lines of dialogue here and there. The performances by the multinational cast, though, are without fault, everyone credibly uttering scientific jargon and feeling like a real person before becoming alien fodder. Even in a film where Ryan Reynolds and Jake Gyllenhaal are the biggest stars and get top billing, this is more of an ensemble piece, and the order in which the crew gets taken out by “Calvin” is deceptive and largely surprising.

“Life” isn’t provocative enough to ask existential questions, and it’s just as well. On the terms of a B-movie with an A-movie budget, it works as a top-notch gripper with enough inspiration of its own and the kind of set-pieces that rattle audiences in their seats. Tech credits are aces across the board. Seamus McGarvey’s cinematography is gorgeous and lucid, the film kicking off with an elegantly devised unbroken shot that glides with the floating crew members down corridors of the space station. Jon Ekstrand’s unsettling score elicits goosebumps on more than one occasion. The design of the alien organism, “Calvin,” melds the beautiful with the grotesque into a flower-cum-squid creature, and the sight of zero-gravity gore is a gnarly touch. The reading of children’s book “Goodnight Moon” also lends a mournful tone to the doom that might await the survivors. Without ever losing its nerve, the end of “Life” is such a radically nifty and memorably hopeless sucker punch that one is surprised and delighted the studio actually went for it. Your move, “Alien: Covenant.”