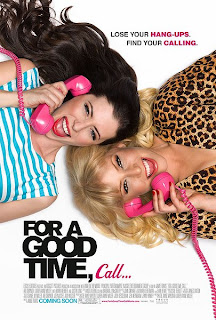 Slim and sitcommy, but amusingly bawdy, dirty-mouthed, and breezy, "For a Good Time, Call…" might be the sweetest and most good-natured comedy about phone sex. This frisky indie fits right into the popular subgenre of chicks-being-as-naughty-as-the-dudes comedies, a fad that really took off with "Bridesmaids" and then its bitter cousin, "Bachelorette." Feature-debuting director Jamie Travis, working from a script by co-star Lauren Anne Miller and her former college roommate, co-writer Katie Anne Naylon, doesn't let his low budget and 16-day shooting schedule get him down because, though not memorable or a think-piece, this sitcom-ready diversion sure is a good time.

After her boyfriend says he needs to "re-evaluate" their boring relationship, strait-laced Lauren (Lauren Anne Miller) is left with an apartment she can't afford. Katie (Ari Graynor), a brassy, leopard-print-wearing free spirit, is living in her deceased bubbie's spacious apartment in Washington Square Park that's no longer rent-controlled, so she has to find a roommate. Their common gay best friend, Jesse (Justin Long), sets them up. You see, ten years ago in college, Lauren drove home the drunk Katie, who peed in her car, making them enemies. Once they're both convinced by Jesse, Lauren moves in and then gets let go from her publishing job, so what to do? One night, Lauren overhears Katie, who works multiple jobs, moaning in her bedroom…she's a phone-sex hotline operator! Before you know it, the girls start a phone-sex business, where Lauren takes charge of the billing for "1-900-MMM-HMMM." Down the road, of course, Lauren will end up hanging up her good-girl image and getting her chance to "ooh" and "aah" on the phone.

High-concept all the way, the premise is no doubt a hoot. It also helps that Miller and Naylon's script is sharper and made more from scratch than the many phoned-in, design-by-committee studio movies. Then again, at 85 minutes—a brisk 85 minutes, though—the film does show its flimsiness and hurriedness when adding in forced narrative conflicts and formulaic beats typically found in a romantic-comedy. Beyond all the montage laughs and daring smut (complete with dildos and simulated sex), "For a Good Time, Call…" is really, at its heart, a "sismance"/"bramance"/"homance," the many answers to "bromance," exploring the deep affection in a female friendship. Lauren and Katie might be cut from the odd-couple cloth of movies, but there are more shadings to them than one might expect. Their double-entendre phone conversation after their "fake break-up" cleverly teeters on parody that you almost expect these platonic gals to switch teams; thankfully, it's kept sincere and made winning by Miller and Graynor.

Standing out in various supporting roles since "Nick and Norah's Infinite Playlist," Graynor finally nabs one of the lead roles and sells it. The media labels Graynor as her generation's Bette Midler, which is true of her robust, uninhibited spark plug of comic energy, but she actually resembles Debbie Gibson. Either way, she's one of American comedy's best-kept secrets and gets to showcase what she's truly capable of as a headliner. With a sweetly demure appeal of her own, Miller is the squeaky-clean, squeaky-voiced "straight man" in the equation but doesn't overplay it, even when she lets her hair down in the dirty talk. In supporting roles, Long enjoyably gets free reign in playing the girls' sassy best friend and mediator; Mark Webber is harmlessly charming as Katie's regular caller who wants to meet her in person; and Nia Vardalos has a fun bit part as Lauren's potential boss. Kevin Smith, Seth Rogen (Miller's real-life spouse), and Ken Marino also turn in raunchy cameos as a few of the lewd but lonely callers.

Ultimately due to its likable, engaging leads and smartly snappy writing, the film never becomes a too-too farce. It's outrageous in the sense that these two gal pals take up such a dirty gig to pay the bills (they're not actually sluts), and R-rated without going for visual gross-outs (no woman defecates in a sink). Like something that would have been made in the '80s or '90s (back when sex hotlines were still a "thing"), this fun little girl-power comedy is very hard to dislike.