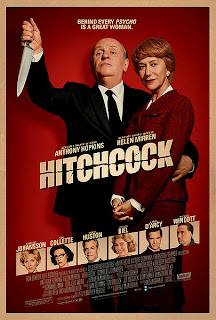 Seen for what it is, rather than what it's not, "Hitchcock" is a briskly paced, delightfully witty, and irresistibly entertaining portrait of "The Master of Suspense," his creative process, and the real Hitchcock blonde in his life. A companion piece to the illuminating but not-so-flattering HBO telefilm "The Girl," which shed light on Alfred Hitchcock's obsession with blonde muse Tippi Hedren on the set of "The Birds" and portrayed him as a dirty old man, "Hitchcock" more joyously depicts the man's marriage to one equally influential woman and the behind-the-scenes making of his most culturally known horror picture, "Psycho."

"Mr. Hitchcock, you're the most famous director in the medium, but you're 60 years old. Shouldn't you just quit while you're ahead?" a reporter snidely commented at the premiere of the director's 1959 hit "North by Northwest." Alfred Hitchcock (Anthony Hopkins) took that to heart, going on the lookout for "a nice, clean, nasty piece of work" that would go outside of his comfort zone and shock the world. Stumbling upon Robert Bloch's book about voyeurism, tranvestism, murder, and human taxidermy, "Psycho," he took every copy of the book out of Hollywood bookstore so every viewer could later savor the ending in the movie adaptation. Paramount Pictures financed all of Hitchcock's previous pictures and agreed to distribution but refused to fund the seemingly tasteless "Psycho," so Hitch did it himself on an $80,000 budget by mortgaging his house. He also wrangled with the Production Code Administration, promising them that his murder scene in the shower would only suggest nudity and skin being punctured by a knife with the illusion of editing ("I assure you, my murders are always models of taste and discretion"). In a time when toilets were neither seen nor heard in movies and seeing an actress in her bra on the screen was considered racy, 1960's "Psycho" finally got off the ground and would go on to change cinema.

On the personal front, Hitchcock's initially skeptical wife, Alma Reville (Helen Mirren), supported her husband's choices in going through with the movie, even if that meant sacrificing their beloved pool and taking her time away from the garden. It was even her whom suggested not to wait to kill off his leading lady at the halfway point but after the first thirty minutes, as well as to cast Janet Leigh and Anthony Perkins. Then she began to feel underappreciated and unnoticed, compared to Hitch's fantasy blondes that he'd so often cast, so under her husband's nose, Alma started working with her charming screenwriter friend Whitfield Cook (a fittingly weaselly Danny Huston) on a new adapted treatment, described as "stillborn" by her hubby, in his secluded beach house. In the end, guess which man she stood by.

In the wake of Steven Spielberg's overrated "Lincoln," a biopic made of sleep-inducing L-tryptophan, a film definitively titled "Hitchcock" sounded like a daunting proposition, especially from a first-time narrative filmmaker. But director Sacha Gervasi (the 2008 documentary "Anvil! The Story of Anvil") takes the biopic template and wisely centers on the tooth-and-nail process of the iconic director making his masterpiece, as well as his marital relationship, in a tight 98 minutes that goes by in a flash.

John J. McLaughlin's well-researched script, based on Stephen Rebello's book "Alfred Hitchcock and the Making of Psycho," has obviously taken liberties from the truth (who really knows?), not the least being Hitchcock's dialoguing with and hallucinations of Ed Gein (Michael Wincott), the notorious 1944, Wisconsin killer whose true crimes and maternal attachment were the basis for Bloch's novel and Hitchcock's picture. These dream/fantasy moments provide a sense of true-crime horror and a clever conduit into the filmmaker's darkly twisted and obsessive psyche. McLaughlin also has an ear for Hitchcock's deadpan wit (on introduction, Hitch goes "You may call me Hitch—hold the cock!") and indulges in some playfully quick-witted jabs at the Hollywood studio system (Paramount fears the release of "Psycho" and Hitch retorts, "Unlike the last five Martin and Lewis films you're all so proud of?").

Like an episode of "Alfred Hitchcock Presents" with Danny Elfman's jovial score, the film is bookended by Hitchcock talking directly to the camera, beginning with gallows humor (Gein knocking his brother out with a shovel and then panning to Hitch introducing "our little movie") and ending with a sly nod to what came next in his career. (The Hitchcocks' only child, Patricia, is oddly omitted from the story, even though she appeared in "Psycho," but that's small potatoes.)

Sir Anthony Hopkins, with silicone wrap creating Hitch's jowls and padding for his corpulent body, doesn't uncannily look like the iconic master as much as he gets the voice, mannerisms, and dry, mischievous humor down pat. One might not lose him or herself in that he or she is watching Hitchcock, rather than a really kosher impersonation, but Hopkins' cheeky, on-target, altogether terrific turn does more than enough to suggest and flesh out the man and his essence, without reducing him to a caricature. Watch as he stands outside the theater doors of "Psycho's" opening night in giddy anticipation and then conducts the screams of his audience when Bernard Herrmann's orchestral score for the shower scene sounds. Helen Mirren, absolutely lovely, forceful, and heartbreaking, is Hopkins' match in every way as Alma. She loves her husband dearly, from making sure he drinks in moderation and eats more celery to the time she fulfills a crucial role on the set while he's ill at home, but isn't afraid to put her foot down either. Since Alfred and Alma's relationship is at the film's core, it's not judgmental on either side but well-rounded and unexpectedly poignant.

Of the "Psycho" cast members, Scarlett Johansson, Jessica Biel, and James D'Arcy all impeccably slip into their respective roles. As Janet Leigh/Marion Crane, Johansson nails the real-life actress' natural charm, spunk, and professionalism; Biel, as Vera Miles/Lila Crane who was shunned by the director for getting pregnant and ruining her chances of being cast as "Vertigo's" leading lady, more than capably adds some dimension; and D'Arcy, most underused of the three, perfects the lanky, sensitive Anthony Perkins/Norman Bates to a 'T' through looks and performance. Toni Collette lends strong support as Hitch's faithful but no-nonsense personal assistant, Peggy Robertson. Other recognizable character actors, including Richard Portnow (as Paramount president Barney Balaban), Kurtwood Smith (as PCA head Geoffrey Shurlock), and Michael Stuhlbarg (as agent Lew Wasserman), make impressions, as does '80s child star Ralph Macchio playing screenwriter Joseph Stefano. Costumes, production design and art direction are also classy and authentic for the Classic Hollywood period; Leigh's landmark shower scene, where the director takes his own stab at it, and Miles' pivotal discovery of Mother/Mrs. Bates, swinging light bulb included, are very gloriously recreated.

Similar to Tim Burton's "Ed Wood," this is a fascinating and revealing, albeit not extremely meaty, glimpse—or, peephole—into a historical figure's life, but also such an adroitly made piece of entertainment that's careful never to fall into the realm of camp, artifice, or parody. For those with a love and appreciation for movies, moviemaking, and everything Hitchcock, "Hitchcock" is a mandatory, rapturously enjoyable paean to one legendary filmmaker that will make for a very good evening indeed. That's ambitious enough; let's just hope Gus Van Sant doesn't take a stab at remaking it.