"In Their Skin" better than standard home-invasion thriller 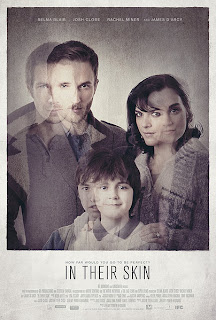 Home-invasion thrillers aren't terribly scarce nowadays. By now, another representative of the subgenre would sound tired, but "In Their Skin" honorably joins the ranks of 2007's "Them," 2008's "The Strangers" and "Funny Games" (not to mention its 1997 original copy), 2011's "Kidnapped," and 2012's loose remake of "Mother's Day," all of them wiry thrill machines. The worthy directorial debut of Jeremy Power Regimbal, the film is less uncompromising and brutally violent than the others but just as potently disturbing and skittishly creepy as any, so don't expect a pleasant outlook.

After losing their little girl in a car accident, lawyer Mark Hughes (Joshua Close), his real-estate developer wife Mary (Selma Blair), and their 8-year-old son Brendon (Quinn Lord), with the family dog Harris in tow, take their grief to Mark's grandfather's spacious mountain home. The couple is going through a rough patch in their marriage, but they just want to go on with being a family again. The night they settle in, a station wagon pulls up to their gate and then leaves. Then at the crack of dawn, Mark wakes up to a family, the Sakowskis, delivering spare firewood as a nice, neighborly gesture. Like the Hughes, the Sakowskis are made up of three: a father, Bobby (James D'Arcy); his wife, Jane (Rachel Miner); and their son, Jared (Alex Ferris), who's just turned 9 but is big for his age. The patriarch practically invites his family to dinner, and Mark can't say 'no,' so once the supposedly Polish family arrives, Bobby and Jane begin asking personal questions about Mark and Mary's lives and strangely replicating their gestures. More trouble ensues.

The premise is straight-ahead, although the invaders don't immediately terrorize the family but feel them out first, in a layer not unrelated to "Single White Female." Formerly titled "Replicas," "In Their Skin" makes thematic sense with either title. More importantly, actor Close's screenplay (from a story he wrote with his brother, Justin Tyler Close, and director Regimbal) digs a little bit deeper, favoring characterizations and nuance over cheap plot gimmicks and graphic torture. Helped by impressive performances, the story cogently establishes the Hughes as an empathetic familial unit, thus making their plight that more upsetting. This family has clearly been through enough already and now not only are their lives at stake but their identities as well.

Close underplays the mourning of losing his daughter and the distance with his wife without becoming stiff or losing empathy. Most affecting is Blair, who can no longer be underestimated as an actress, as she gets the chance to express raw emotions with this dark material. Mary is now more understandably protective of Brendon and uses countless glasses of wine to cope. Playing Jane, Mary's fragile, childlike "replica" of sorts, Miner leaves a haunting mark, and D'Arcy's Bobby is as ingratiating as he is outwardly threatening and unhinged. Also holding their own: Quinn, who unforgettably played burlap sack-wearing, mayhem-bringing fiend Sam in 2009's new Halloween staple "Trick 'r Treat," is a natural, and his total opposite is menacingly played by Ferris, whose first spoken line ("I got a hunting rifle for my birthday") should be a major tip-off.

Subtly scored, strikingly lensed by cinematographer Norm Li ("Beyond the Black Rainbow"), and coated in a chilly, grey palette with elegant shot compositions, the film is more artfully made than any "family under siege" genre exercise. Tension is not built through rushed violence but uncomfortable dialogue exchanges that are far creepier. Pared-down and skillfully crafted, "In Their Skin" comes to a head that is more hopeful than most and has more on its mind, with underlying meaning about loss, redemption, and the social-class ideology of "the perfect family," than exploiting a family as sitting ducks. There's enough here to distinguish itself.