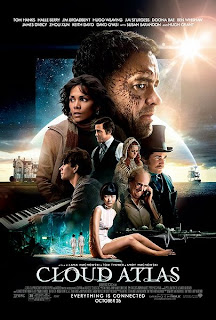 From one medium to another, a screen adaptation of David Mitchell's 2004 existentialist tome would seem unfilmable, with all of its thematic layers and disparate stories building on top of one another. But if there's going to be one film this year that hitches its wagon to a star and succeeds more than not, it's "Cloud Atlas." Written for the screen and directed by Tom Tykwer and Lana & Andy Wachowski, the film is a full-bore experience of expert cinematic storytelling and dazzling entertainment that isn't done justice through description and just has to be seen. On one hand, it's dense, pseudo-philosophical poppycock, but the cumulative effect is a grand, fascinating, exceptionally woven opus.

As we're told, "Our lives are not our own. We are bound to others, past and present, and by each crime and every kindness, we birth our future." From the womb to the tomb, we are all connected through reincarnation but not in a literal sense, so nobody comes back as an insect or a rock. The film tangles together six stories that span five-hundred years and six eras. In the Pacific Islands in 1849, young lawyer Adam Ewing (Jim Sturgess) is stranded and welcomed aboard a ship with a scheming doctor (Tom Hanks). While documenting his voyage, he ends up fighting for the rights of a stowaway slave (David Gyasi). In 1936, Cambridge, musician Robert Frobisher (Ben Whishaw) leaves his lover, Rufus Sixsmith (James D'Arcy), to work as an amanuensis for crotchety composer Vivyan Ayrs (Jim Broadbent), who owns a copy of "The Pacific Journal of Adam Ewing." The two collaborate on a classical piece called "The Cloud Atlas Sextet."

In San Francisco, 1973, Spyglass Magazine reporter Luisa Rey (Halle Berry) hears the musical piece in a record shop and seems to have heard it before. She has a fateful encounter with the eldery Sixsmith in an elevator during a power outage, which leads to Luisa piecing together a murder and a conspiracy involving a nuclear power plant and its crooked high-up (Hugh Grant). A publisher, Timothy Cavendish (Jim Broadbent), is committed to a retirement home that's more like a prison by his brother (Grant), but he and three other residents plan a getaway so he can find the love of his life (Susan Sarandon). In the dystopian future of 2144, Neo Seoul, female fabricant Sonmi-451 (Donna Bae) works in a bright-colored cafe as a waitress, where she exists to "honor thy consumer." But she's really a prisoner, until rebel Hae-Joo Chang (Sturgess in yellowface) breaks her out to beat the system. Finally, on the Big Isle, "106 Winters After The Fall," primitive tribesman Zachry (Hanks) and his people are visited by Meronym (Berry), the last of the technologically advanced "Prescients," and the two go onto a journey into the mountains.

There probably won't be too much middle ground with "Cloud Atlas," which audiences will either love or hate. But after breaking new ground in 1999 with their excitingly visionary "The Matrix" (back when sibling Lana was Larry), the Wachowskis deserve due points for their sizable ambition and epic scope here, as does Tykwer, who's best known for scrambling up time and fateful possibilities in 1998's "Run Lola Run." Since this is a collaborative effort, the stories (each have taken on three of the six) converge seamlessly, and all three filmmakers' passion and joy for inventing different worlds drip into every frame. At nearly three hours long, "Cloud Atlas" does slightly fall short of being a masterpiece. The structure is non-linear, yet fluidly edited and never hard to follow, so two out of the six stories—the first seafaring tale and the sixth post-apocalyptic adventure, which relies on an often incomprehensible futuristic argot—resonate less than the others. Otherwise, the second is a heartbreakingly tragic period piece, the third is a suspenseful '70s potboiler, the fourth is a delightfully funny farce with hard truths on growing old and a shout-out to "Soylent Green," and the fifth is an enthralling and touching sci-fi saga with impeccable production design out of "Blade Runner." Although that's what keeps the whole from being uniformly great, four out of six in "Cloud Atlas" terms is still very good. In theory, intercutting a sixtet of stories should be confusing, but all of them complement one another thematically and make up a bigger meaning. Had the filmmakers separated each yarn into 30-minute vignettes and then returned to each of them, the whole narrative might have been rendered uneven, but as is, they are all involving.

Seeing an ensemble cast often hidden under layers of make-up and prosthetics that cross gender and race boundaries would seem hokey and gimmicky, but it's no more of a distracting stunt than Joseph Gordon-Levitt playing a younger version of Bruce Willis in "Looper." There's more to the stunt casting than saying "Wait, is that so-and-so?" It's hard to say who stands out the most because every actor disappears into his or her character and gives a meaty performance. Hanks has the most fun as an Irish thug author out of a Guy Ritchie movie who shoves a book critic off a balcony. As in "The Polar Express," he tackles five other parts. Berry is most compelling as the reporter, but also takes on the roles of a Jewish woman, an old Asian man, a slave, and an Indian woman. Hugo Weaving gets to play a bad guy/girl sixfold. Tracing back to his drag queen in "The Adventures of Priscilla, Queen of the Desert" and Agent Smith in "The Matrix" movies, the actor vanishes into each of his roles, most memorably the gender-bending Nurse Noakes (who almost resembles a less personable Mrs. Doubtfire) and Old Georgie, a frighteningly evil leprechaun that comes into Zachry's vision. Grant is also the least recognizable of the bunch when playing a face-painted cannibal in the Big Isle segment.

With a sprawling, audacious film like "Cloud Atlas," time and patience are required to sort out all the pieces of the plot nestings. Tykwer and the Wachowskis refuse to hold your hand or show you the way, and that's refreshing. Will you have all the answers and decode all the connections by the end? Perhaps not, but that's what multiple viewings are for. While some cookie-cutter formula pictures entertain but disintegrate from memory on the drive home, "Cloud Atlas" is brimming with so much energy, beautiful spectacle, and imagination that a film swinging for the fences is the much more desirable one. It's a singular, polarizing piece of work that can't be ignored and won't be forgotten. That's the true true!