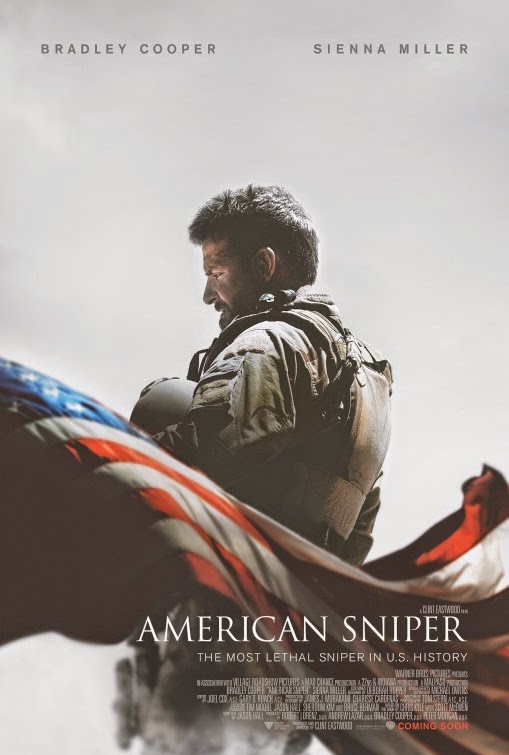 A solidly well-made war biopic about the most lethal sharpshooter in U.S. history, "American Sniper" is also dramatically problematic and cursory, keeping it from achieving the greatness that was so closely within its grasp. Directed by Clint Eastwood (the second film of this year, following "Jersey Boys") and written by Jason Hall (2013's "Paranoia"), working from the book "American Sniper: The Autobiography of the Most Lethal Sniper in U.S. Military History" by Chris Kyle and ghostwriters Scott McEwen and Jim DeFelice, the film keeps the politicking out of it, even as it seems to be both a war movie and an anti-war movie. Despite an undercurrent of dishonesty that belies its intentions, "American Sniper" has a blunt power that cannot be ignored from Eastwood's fine craftsmanship and Bradley Cooper's tops work.

Doggedly patriotic Navy SEAL Chris Kyle (Bradley Cooper) grew up being told by his hunter father that he should be a "sheepdog" and protect others. In Texas, he worked as a rodeo cowboy, until seeing the terrorist attacks on the U.S. embassies and immediately enlisting and enduring the brutal training as a U.S. Navy SEAL. After meeting a tough young woman named Taya (Sienna Miller) at a bar and marrying her shortly thereafter, he is deployed to Iraq as a sniper to defend the country. On his first tour of duty, Chris is faced with the tough decisions and tasked to a group hunt to find terrorist, but he makes so many successful kills that he earns his stripes under the moniker, "The Legend." When he returns home after his second tour, Taya gives birth to their daughter. Between the rest of his tours and returning home, Chris becomes so on edge in adjusting to civilian life. Being credited with over 160 kills during four tours in Iraq, it's no wonder the war has taken a toll on him.

When we first meet our hero, Chris Kyle is on his stomach on top of a roof, focusing through the scope of his sniper rifle. He spots an Iraqi mother and her son; she seems to be carrying what looks like a grenade underneath her chador and hands it to the boy, who begins running toward a Marine humvee. Will Chris pull the trigger on a child? In his ear is his spotter (Kyle Gallner), reminding Chris that it could cost him his job if he shoots and he's wrong; then, of course, if he doesn't shoot and he's wrong, other soldiers down below will die on his watch. Director Eastwood's staging is gripping and his use of sound effective, rattling the viewer with edgy antipation and unbearable tension. Now, can a war film ever have too much action? With "American Sniper" being packaged as a flag-waving action movie, it's a tricky question to answer. Being about a war hero who is good at work, the film is going to show the unpretty picture that is war, but here, the repetitive sameness of it all begins to bury the lede of its own subject. Yes, the combat scenes are steadily shot and tensely staged, particularly the opening with Chris on the rooftop. A torturous moment with The Butcher of Fallujah (Mido Hamada) capturing a father and son is terrifying, and a scene set during a sandstorm is also well-executed. However, the at-home sections involving Chris' PTSD and the effects it has on his wife and family are the most fascinating, and there should have been more. Once Chris is home and visits a psychiatrist, telling him he's "haunted by all the guys he couldn't save," and then encouraged to help wounded veterans, the film abruptly rushes from that transition to the end. Next thing we know, our hero's fate is revealed with a closing postscript and then real-life footage of his funeral procession and memorial service at the Cowboys Stadium.

Coming a long way since his smarmy character in all three "The Hangover" movies, Bradley Cooper has hit a sweet spot in his career, challenging himself and showing what he's fully capable of in 2012's "Silver Linings Playbook," 2013's "The Place Beyond the Pines" and "American Hustle." Here, in his portrayal of the now-late Chris Kyle, he impresses, both through his bulked-up physical transformation and damaged emotional psyche when he is back home stateside. Cooper is never less than riveting, traversing from Texas cowboy to emotionally removed marksman. He never overplays the moments where Chris flinches over the sounds of power tools at an auto shop back home. Sienna Miller has less time to develop Chris Kyle's wife Taya, sure, but she makes her minimal scenes count. Unlike her work as the wife of a murdered wrestling hero in 2014's "Foxcatcher," she's allowed to go beyond the stock role of Concerned Army Wife and show the toll her husband's pain has on her.

Like this year's Angelina Jolie-directed "Unbroken," the heroic true story of Louis Zamperini, "American Sniper" is a valiant effort of a story that deserved to be told, but aside from the inherent intensity of warfare, it lacks a certain complexity and narrative balance. Eastwood's film has a little more nuance and more warts than Jolie's, but it still feels like an underdone character study that could have fleshed out its subject's flaws even more. The script excises Chris' jingoistic racism, an oversight that's more bothersome in hindsight—every Hollywood film takes creative liberties and "American Sniper" is no different—but even within the context of just the film itself, it offers few insights, with one exception. Whether or not it was intentional by Eastwood, the film seems to pose the question: Is there a difference between killing for our country over risking your life for our country? There is certainly more depth to Chris Kyle than we will ever know. While "American Sniper" celebrates the American hero's dedication, it only sometimes centers on the psychological impact of war in proficiently compelling fashion.