Love's a Happy/Sad Song: Kendrick and Jordan bring the house down in less-than-moving "The Last Five Years" 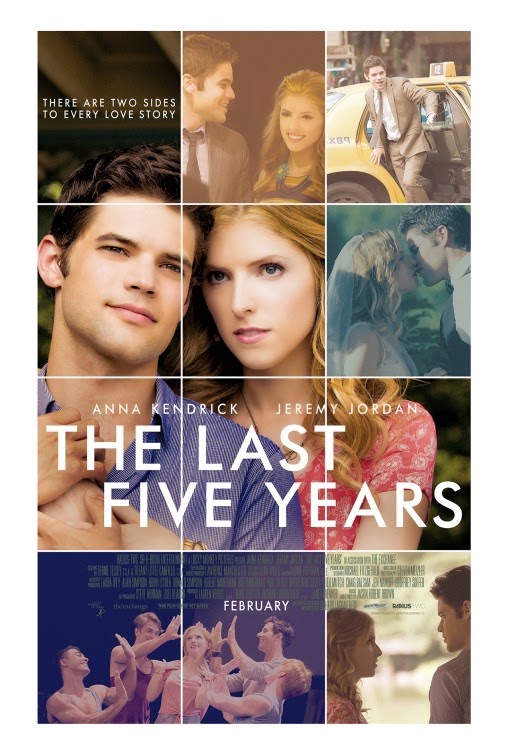 Seeing composer-lyricist Jason Robert Brown's 2002 Off-Broadway cult musical "The Last Five Years" being adapted to the screen will only mean much to the most fervid musical enthusiast. Within a small budget, heart and sincerity have obviously been thrown into Richard LaGravenese's (2013's "Beautiful Creatures") special passion project, but enjoying and solely admiring this sung-through two-character musical becomes a tug-of-war experience that never fully reaches the former. That is disappointing, considering the skillfully matched Anna Kendrick and Jeremy Jordan are in charge of playing Cathy and Jamie, the twentysomething married couple at different stages of their artistic careers. Both are gifted performers in their own right with equal charisma and likability, and neither of them need an introduction as both of their belting voices, in chorus and individually, bring the house down. Quite a few of the tuneful set-pieces stir and come to life, but in transitioning from theater to film, "The Last Five Years" doesn't exactly resonate as a whole piece for some reason.

The evolution of Cathy and Jamie's five-year relationship begins at the end of it. Opening on a strong yet downbeat note with the achingly raw "Still Hurting," where Cathy sits in their New York apartment in pain after reading Jamie's parting note, the film is already heartbreaking without even knowing the full story. From there, "The Last Five Years" goes back to the beginning, telling the young lovers' story out of sequence from Jamie's point-of-view. Cathy Hiatt and Jamie Wellerstein fell hard in love, quickly moving in together and then getting married. He was an aspiring writer who had his manuscript picked up by Random House, and she bust her butt in audition after audition to become an actress on Broadway. Though Cathy is happy for Jamie's success in having his first work published, she strikes out at so many auditions until taking her talent to summer stock in Ohio. For the remaining years, they both try to fight through their temptations and resentments, but obviously, the relationship just wasn't meant to be.

To match its small budget, "The Last Five Years" has a rough-hewn, homegrown aesthetic, as director Richard LaGravenese's direction remains so intimate with this couple and the camera constantly on them. Between Jason Robert Brown's music and the two lead performances, the film often holds a spontaneity and joy, even when the bittersweet and relatable truths feel muffled by its exhausting duties to be a sung-through musical. Cathy and Jamie only have a few short conversations of real dialogue and their relationship problems border on masochism that it's hard to feel for them as real people. There's already little dramatic tension, so it's important to focus more on the musical numbers of which there are many. "Summer in Ohio" is a witty, irresistible ditty, sung by Kendrick at Cathy's summer stock with her chorus line of theater boys, as is "Climbing Uphill," where she speaks her inner mind during a New York audition ("Why is the director staring at his crotch? Why is that man staring at my resume? Don't stare at my resume . . . These are the people who cast Russell Crowe in a musical.") The only real bum note is "The Schmuel Song," Jamie's anecdote about a Jewish tailor to raise Cathy's spirits, which begins whimsically but then quickly turns grating and tiresome before it's over. Finally, "Goodbye Until Tomorrow" is a rewarding close for these two before they're over for good.

A Tony Award nominee at only 12 years old and since proving her multi-talented chops, the unfailingly charming Anna Kendrick can sing and do dramatic heavy lifting, building a lived-in history with her co-star. Likewise, stage actor Jeremy Jordan (2012's "Joyful Noise" and TV's "Smash") has such star quality that he deserves first dibs on any big-screen project. If anything, Kendrick and Jordan get to showcase their stuff, carrying the music and the emotional beats of their story with aplomb, while the film itself remains curiously insular and doesn't feel as emotionally gutting as it should for a sweeping romance. Intimate like theater but wonkily structured on film, "The Last Five Years" still emerges less than victorious over both mediums. Those with an appreciation for a sung-through musical about a soup-to-nuts relationship will want to seek it out, while others who are so inclined could just listen to the soundtrack on iTunes in short bursts.