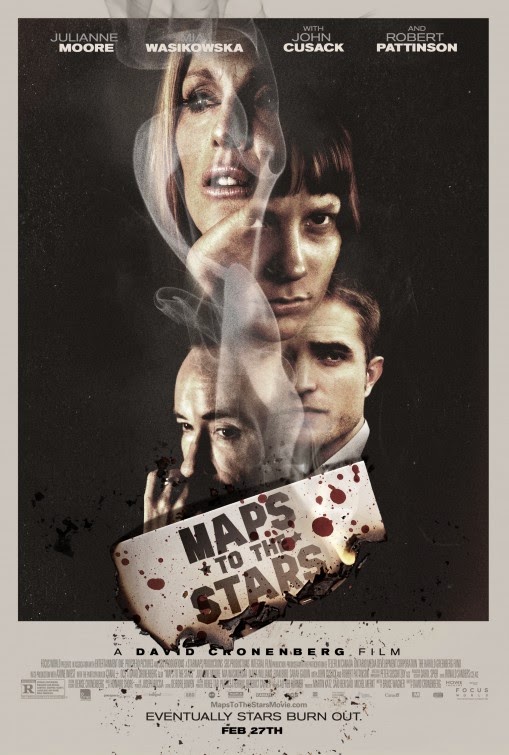 With 2011's "A Dangerous Method" and 2012's "Cosmopolis" back to back in recent years, daring, bizarre and often clinically detached Canadian auteur David Cronenberg seemed to have lost his touch, changing his focus from the body to the mind, albeit in suffocatingly tedious and didactic ways that distanced the viewers to detrimental ends. He's mostly back on track with "Maps to the Stars," a scabrous, cynically drawn, at times caustically humorous critique of fame, wealth, nepotism, and even incest in Tinseltown. Usually working outside of the Hollywood system (and heretofore never shooting any of his films in the states), Cronenberg finds the savage ugliness and inbreeding inside the sunny shell of Hollywood and takes it down one character at a time. The film is more misanthropic than glamorous, and yet, it's impossible to look away as viewed through the filmmaker's disturbing prism.

Just off the bus from Jupiter (Florida, that is), fire-scarred Agatha (Mia Wasikowska) arrives in Los Angeles to visit family and for a tour of Hollywood by limousine driver Jerome Fontana (Robert Pattinson), a struggling actor and screenwriter. She claims to be friends with Carrie Fisher, even though they only met on Twitter. Meanwhile, spoiled-rotten 13-year-old actor Benjie Weiss (Evan Bird) is just out of rehab for substance abuse, and when he's not visiting his a fan in a hospital, he's demanding more money and angry about his young co-star stealing the show on the set of his sequel to hit movie "Bad Babysitter." His father, Dr. Stafford Weiss (John Cusack), is a famed new-age guru for the stars, and Weiss' wife Christina (Olivia Williams) is their son's manager, on the verge of a nervous breakdown while negotiating Benjie's comeback contract. Also, one of Dr. Weiss' Reiki-massage patients is whiny, neurotic, overmedicated actress Havana Segrand (Julianne Moore). She's aging, fading, and haunted by the younger ghost of her deceased mother, Clarice Taggart (Sarah Gadon), but also dying to play her starlet mother's part in a remake of "Stolen Waters." The film starts to come together when Havana, looking for a new personal assistant after firing her last one, takes Carrie Fisher's suggestion and hires Agatha, who has a close connection with the Weiss family.

Scathingly written with acidic snark by screenwriter Bruce Wagner (TV's State of the Union"), who takes from his 2013 novel "Dead Stars," "Maps to the Stars" is about people, as vacuous and narcissistic and privileged as they are, and never apologizes for them but surely invites the viewer to mock them. This is a nihilistic, ruthlessly satirical study of people whom no one will want to meet in real life, much like the awful species of human beings in any Bret Easton Ellis story, but meeting and watching them on the screen is fascinating. Aside from maybe chauffeur Jerome, all of the characters are haunted by their pasts or by some sort of hallucinatory, delusional disorder, and they have crossed the point of no return. Fame and celebrity cannot free them. While none of them are innately appealing, we aren't really asked to like these despicable creations in the first place. Like David Lynch's exploration into the dark, seedy underbelly of white-picket-fence small-town America in 1986's "Blue Velvet," "Maps to the Stars" doesn't say anything startlingly new or insightful about La-La Land. And, there has been no shortage of biting films with similarly satiric aims (David Lynch's "Mulholland Drive" and Christopher Guest's "For Your Consideration" were effective and Paul Schrader's "The Canyons" was not), but how it says it is startling and all Cronenberg.

If there is a center in the film, Mia Wasikowska's enigmatic Agatha is it. She's surely the connective tissue to all of the other characters, and though Agatha is just from Jupiter, Florida, she does feel like an alien from another planet. Wasikowska, not far off from the darkness she shed in 2013's "Stoker," conceals a lot behind her odd-bird facade, much like the arm-length black gloves she wears to cover her burns from a fire. Like in every performance, Julianne Moore gives herself over to her character, here as an abrasive, pampered woman-child actress tormented inside from the abuse of her late mother. Forming a stitched-together person between Norma Desmond and the real Lindsay Lohan, Moore fashions a deliciously uninhibited performance as Havana, playing her loopily and honestly with pathetic sadness and insecurities without dipping into campiness or caricature. Now-14-year-old Evan Bird (TV's "The Killing") is scarily watchable, viciously turning his Justin Bieber-like send-up into a disturbed, unfeeling monster, particularly in one scene at a friend's house when he, under the influence of GHB, starts playing with a seemingly empty gun and pointing it around. When the petulant Benjie visits a hospitalized girl with Non-Hodgkin's lymphoma for publicity reasons, he mistakes her disease for AIDS. After leaving the hospital, he says to his agent, "What the fuck is Non-Hodgkin's? I mean, non. It either is or it isn't." It would almost be unthinkable if Bird weren't exactly like his character in real life. As Stafford and Cristina Weiss, John Cusack and Olivia Williams do well under characters that are mostly means to an end. Robert Pattinson is allotted the least screen time as Jerome, who gets off the hook of the film's indictment of characters, but he reveals an opportunistic side. It seems like Cronenberg mainly cast Pattinson to make the actor's participation of a piece with "Cosmopolis," where he was a wealthy passenger in a stretch limo.

It's hard to say what exactly we're supposed to make of it all, except to take the film as a Hollywood rant that should prevent anyone from desiring to be rich and famous if that lifestyle was granted to them. Save for a few trouble spots—Agatha is supposed to work a party at Havana's house that never happens, which could have led to some juicy "All About Eve"-ish drama between actress and assistant before their final squabble, and Cristina is handed a harshly abrupt exit—"Maps to the Stars" is, for what it examines, cruelly articulated and fiercely acted but decidedly a tough sit if one hopes for an optimistic outlook. Redemption is definitely not in the cards for anyone on screen, but there is for the puppet master behind the camera. There are times where director David Cronenberg and screenwriter Bruce Wagner get a bit off track with a few of their turns of the screw, but perhaps the lack of threshold is the point. Besides, no Greek tragedy would be unforgettable if it didn't crack a few eggs.