DVD/Blu-ray: "Katy Perry: Part of Me" reveals the human side with infectious music 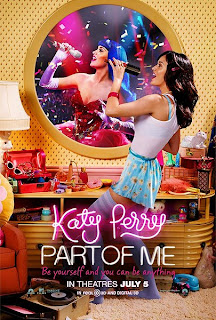 Like "Justin Bieber: Never Say Never" or even "Glee: The 3D Concert Movie," "Katy Perry: Part of Me" has the same basic beats of a prepackaged PR piece and propaganda, but at its core is an entertaining, revealing, sympathetic, even poignant portrait. The film might not be the full Katy Perry, but isn't that what autobiographies are for? Directors Dan Cutforth and Jane Lipsitz fluidly cover all the bases, from Katy's peppy, infectiously catchy songs, to the backstage interviews and sneak peeks, inspirational testimonials by fans for an It's okay to be fun and weird! Express yourself! Follow your dreams! message, and the growth and highs and lows of both her career and personal life. All in all, it should win over anybody, including Grandma Perry.

A believer in fairy tales and a dreamer at heart since 9, the perky, saucer-eyed 27-year-old Katy Perry (Katheryn Elizabeth "Katy" Hudson) just wants to entertain. She grew up with born-again Penecostal Christians and traveling ministers for parents. Katy, her brother, and sister weren't allowed to eat Lucky Charms cereal because "luck" was considered Lucifer, and "The Wizard of Oz" and "Alice in Wonderland" were banned from viewing. Making her first gospel record at 15, Katy was then exposed to the emotional and thoughtful freedom of Alanis Morsette. Once she moved to Los Angeles, she found herself, but she wasn't an overnight success; her hard work ethic got her where she is today.

Three quarters documentary and a quarter concert, "Katy Perry: Part of Me" is the real deal. We see Katy on top of the world, headlining her biggest world tour ever and her career blowing up when five singles from her second album hit # 1 on the Billboard charts. If her life seems like an all-day-and-night party, it isn't. We see the struggle Katy faced to find her own image with record labels, and we hear of the times she felt lost and desperate before becoming "Katy Perry." On her days off, Katy spends them flying to see her husband, actor Russell Brand, and make their marriage work, before they divorce. When she's tired, not made-up, and teary, these are the rawest, most honest moments. Right before she has to go up on stage at a venue in São Paulo, Brazil, with the fans shouting "Katy!," she's deeply depressed and sobbing, but puts on her game face.

Rising up on an elevator to the stage in a cake dress with spinning peppermint wheels on her breasts, Katy puts on theatrical, candy-colored performances. The film features snippets of Katy belting out "Teenage Dream," "Hot and Cold," "I Kissed a Girl," "E.T.," "Firework," and "California Girls," just to name a few, but if you want a full-on song, find an MTV music video. Perry's sister, Angela, also dresses up as geeky creation Kathy Beth Terry for "Last Friday Night." We can the fans are important to Katy because no matter what, whether rain or shine in her life, she always shows up to her meet-and-greets. Even during a cover of "I Wanna Dance With Somebody," she rallies up fans on stage to dance.

Katy isn't another Britney Spears or Avril Lavigne. Unlike most other singers in the pop world, Katy Perry comes off like the girl next door—down-to-earth, charismatic, lovable, intelligent, and unafraid to just be her goofy, playful self. Like a bubblegummy Alanis Morsette with a brighter, more fun energy, she stays true to herself, which is a pretty good idol of self-empowerment for teenagers. Since "Katy Perry: Part of Me" captures such a real, fun-loving young woman, we want her to find her happy fairy tale ending. She's not just a pop star, but a real person like you and me.