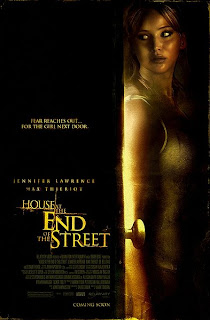 "House at the End of the Street" and last year's "Dream House" have a few things in common: (1) They both come from scripts by David Loucka; (2) Both have 'house' in their titles; (3) Both throw chloroform late into the plot; and (4) Both are unthrilling, entry-level thrillers. Few horror-thriller clichés are left unturned in director Mark Tonderai's first theatrical release, but the valiant efforts of the apple-cheeked Jennifer Lawrence, who shot this in 2010 before her Oscar nomination in "Winter's Bone" and "The Hunger Games," and company help keep it somewhat watchable.

Leaving Chicago and hoping for a fresh start in small-town Pennsylvania, 17-year-old Elissa (Lawrence) and her single mother, Sarah (Elisabeth Shue), move into a spacious house set back in the woods. They got the house cheap because it's next door to where a double murder occurred four years earlier. Legend has it that a young girl named Carrie Anne (Carrie White and Carol Anne must have been taken) murdered her parents and ran off into the woods, never to be found again. It seems the homicidal girl's brother, Ryan (Max Thieriot), has been left with his parents' property (yes, the house at the end of the street) and still lives there. While the locals, with the exception of the friendly Sheriff Weaver (Gil Bellows), all treat Ryan like a pariah, Elissa accepts a ride home from the loner one dark and rainy night. "Your parents got killed," Elissa says, breaking the ice. That would set anyone off, but Ryan is sweet with Elissa and she thinks he's just misunderstood. Little does she know that Carrie Anne is still very much alive.

Not all of "House at the End of the Street" is a complete wash, especially for its first two acts. The strained mother-daughter relationship between Sarah and Elissa is sturdily developed and well-acted by Shue and Lawrence. Even Thieriot, as Ryan, manages to change his mood on a dime from soft and misunderstood to potentially psychotic quite well. Even if Elissa and Ryan predictably break their word, Sarah lays down some rules that she doesn't want them alone together in her or his house; it's about time Movie Parents take control. Elissa is also pretty smart and resourceful that she forwards her mom's house calls to her cell (hint hint: it'll be used for the Big Climax).

Director Tonderai has clearly seen enough horror movies to know when to telegraph every audible jump scare by cranking up the screechy musical stings. He also overcompensates with a lot of visual style whether it's by shaking the camera into a jittery frenzy or employing sped-up editing effects, especially in the prologue that features more bed feathers than blood. Loucka's screenplay (from a story by Jonathan Mostow) may tip its hand early and throw us off with one red herring, but that's because it has another relatively clever twist in store. The psychological aspect is less dime-store than anything on the Lifetime Channel, until characters have to start playing detective, only to get knocked out and tied up, and competent people become incompetent so the plot can move along. That's "House at the End of the Street's" final undoing, when it becomes so by-the-numbers and not even thrilling enough to forgive its shortcomings. Rest assured, Act III has the once-cautious Elissa making enough stupid lapses in judgment to put herself in harm's way and become a standard Final Girl when she should just be running for her life. There's even one unintentionally funny discovery of a tampon box in a trash can. Worst of all is the cheap, simplistic coda, which makes the least sense in hindsight.

Run-of-the-mill without being dreadful, "House at the End of the Street" exists for a teenybopper market where its audience mistakes "Swimfan" for "Fatal Attraction" and "The Roommate" for "Single White Female." This might just be their "Psycho," but it's too dumb and routine to call itself Hitchcockian. If you're 17 and have never fallen for a possible psycho, "#HATES" (as it's being called in its TV spots) might hold a surprise or two.