"The Pact" creepy but vague and illogical 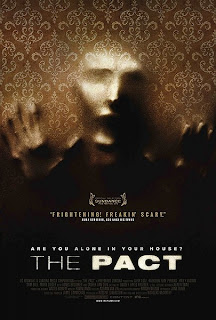 A low-key, occasionally creepy low-budget horror item, "The Pact" will merely suffice as a movie to watch on a Friday night with the lights off, but it won't have you checking behind the shower curtain later on or giving anyone sleepless nights. Finalizing preparations for her mother's funeral, Nicole Barlow (Agnes Bruckner) is alone in her Los Angeles childhood home. Her sister, Annie (Caity Lotz), refuses to make it down for the funeral because she will never forgive the mistreatment and pain their mother put them through. While Nicole says good night via video chat to her young daughter Eva (Dakota Bright), who's in the care of the Barlow sisters' cousin Liz (Kathleen Rose Perkins), they lose connection and then Nicole spots an open door, only to go missing. Informed of her sister's disappearance, Annie, a motorcycle-riding toughie, rides into town with a major chip on her shoulder. Through some pictorial clues on the Net, a medium, and a makeshift Ouija board, Annie is led to some dark skeletons in the old house. Ghosts are just so helpful, aren't they?

All of Annie's problems would be solved if she just drove off and never looked back, but then writer-director Nicholas McCarthy, who expands upon his 11-minute short film of the same name, wouldn't have a movie. In the dialogue department, "The Pact" starts out with the really stiff, expository kind to set the scene and show a strained sisterly relationship, and doesn't get much better from there. Wearing her "I'm not here to make friends!"/"I don't need your help!" scowl throughout, Lotz may not be ready for features quite yet, but it's hard to judge from the dialogue that weighs her down. A few times we see a picture of Annie's mother and she has to whisper "Mom," just so we remember. At one laughable point, after having a scary dream, Annie bolts from her motel room and runs into the parking lot, wearing only a tank top and her undies, to hop on her motorcycle. Casper Van Dien (his last theatrical release being 1999's Tim Burton-helmed "Sleepy Hollow") also shows up as a skeptical cop, but he's only on screen long enough to flatly deliver some flatter dialogue. Bruckner, too, is done away with faster than Drew Barrymore in the opener of "Scream."

"The Pact" doesn't end without drumming up a few modest chills and shivery moments, but despite an unexpected case of misdirection, the film's mixture of a ghost and serial killer doesn't fully come off. Often helped by Ronen Landa's unusual acoustic score, there's one jump-out-of-your-seat jolt with the simple pan of the camera, a few freaky bits in a dark secret room, and a tense climax. McCarthy just hasn't yet figured out consistency in his storytelling with plot turns that remain illogical and underdeveloped. With McCarthy's aptitude for creating dread and deliberate pacing without losing interest, his shaky feature should still work as a solid calling card.

*Special Note: I no longer agree with my former assessment of "The Pact." Somehow, I no longer found the dialogue to be distractingly flat. Caity Lotz does carry a quiet strength to her that is just right for the part of Annie. The scares that registered for me before still work, and the plot turns even make more logical sense on a second viewing. I can't explain how I was underwhelmed the first time and legitimately spooked this time, but I do owe it a grade change. Still flawed, "The Pact" is a modest slow-burn that's well worth a look.