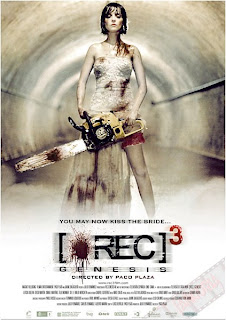 The Spanish-language "[REC]" series has gotten off to a freaky, unnerving start, including a respectable Americanized remake of the first (2008's "Quarantine"). While the previous two films were expert, bleakly toned exercises in sustained tension and claustrophobia, "[REC] 3: Génesis" is a different monster. Directed by Paco Plaza, one half of the filmmaking duo behind 2007's "[REC]" and 2010's "[REC] 2," this second sequel seems like it will retain the POV camera work, only replacing the quarantined apartment building with a wedding milieu. But after all hell breaks loose, the title card finally comes up twenty minutes in and Plaza ditches the first-person, verité aesthetic for a more conventional filmic sensibility. After the wedding videographer says "I have to film everything!" and his camera meets its fateful end, the action loses much of its immediacy but still maintains a stylish visual sense. Also, "[REC] 3: Génesis" is "The Texas Chainsaw Massacre 2" of the "[REC]" franchise, content with going for jokey laughs over armrest-clenching scares. There isn't anything wrong with that approach, if it's executed right, but all this third go-round adds up to is a standard, occasionally crazy gorefest.

Opening like a wedding video (complete with a DVD menu), the film reels us in, establishing bride Clara (Leticia Dolera) and groom Koldo's (Diego Martin) happy, special day. At the reception, the newlyweds are having fun celebrating with all their friends and family, until a deadly virus is borne by Uncle Victor whose dog bite later has him bloodshot-eyed and taking a chunk out of his wife's neck. During the massacre, the bride and groom are separated and must fight to survive and reconnect.

Since this one assumes a more blackly comic tone, it's rarely scary, a number of jolts besides. As for the attempts at humor, they are predominantly lame and feel mismanaged against the mayhem. Right out of a silly Monty Python farce, Koldo and his sidekick suit up in knight armor to search for his missing bride. Get it? He's like her knight in shining armor. For a wink-nudge meta joke, the wedding videographer mocks the groom's cousin's cheap handheld camera, saying that he's going for a more "cinema verité" style. There is also amusement in having the children's costumed entertainer, who calls himself "SpongeJohn" (SpongeBob SquarePants would be copyright infringement), become zombie food.

At least the Fangoria gore level is turned up to eleven, evoking the gleeful crimson-strewn excess of Peter Jackson's "Dead Alive." Few of the set pieces stand out, except for the wildly over-the-top last half when Clara conveniently finds a chainsaw in a lit underground tunnel, saws off part of her wedding dress to expose her red garter, and becomes a kickass bridezilla version of Sarah Connor ("This is my day!"). Thereafter, some giddy gore bits deliver, one involving a kitchen appliance used on a bloodied ghoul, another where a key character must amputate another's infected arm, and a gruesome final kiss between the honeymooners. Dolrea, whose piercing eyes look great with smeared mascara, and Martin also make Clara and Koldo a couple worth rooting for. The fact that this lovely couple had a bun in the oven prior to the carnage provides an emotional current down to the "Till Death Do Us Part" conclusion.

Whether their third film is an "interquel" or a parallel sequel, Plaza and co-writer Luiso Berdejo (also responsible for the original and its U.S. counterpart) don't bother to expand on the epidemic or possession from the first two films. The mentioning of Uncle Victor's dog bite and the appearance of the rail-thin zombie Niña Medeiros (the infected are shown as reflections of her) are the only plot threads shared with "[REC]" and "[REC] 2." Even as a standalone piece, the "genesis" in the title amounts to a hill of beans; there's only a mere flirtation with some religious nonsense spoken by the priest. Bearing the same title proper as its predecessors, "[REC] 3: Génesis" is a disappointment, but still makes for some fast, splattery fun here and there.