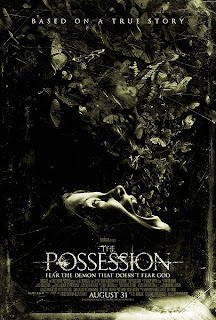 How many more horror films can be made about possessions, demons, and exorcisms? At the beginning of this year, we already got "The Devil Inside," a cheap, dissatisfying found-footage possession pic, and at the end of the summer, we just had the ineptly hairbrained "The Apparition" and now "The Possession." While the others botched the scares, were hampered by poor writing and acting, and ended up being more unintentionally funny than creepy, "The Possession" straddles the line between creepy and schlocky, and it's not half-bad. It's better and more classically minded than most diluted horror films that usually feel shackled by the MPAA's PG-13 rating.

The filmmakers lead us to believe that this is "based on a true story"—okay, there really was a jinxed wooden cabinet on EBay—but that hardly matters here. Jeffrey Dean Morgan plays Clyde Brenek, a college basketball coach who's been divorced for three months from his wife, Stephanie (Kyra Sedgwick), for being absent all the time. Now, he gets to see his two daughters, bratty teenager Hannah (Madison Davenport) and animal-loving, vegetable-eating 10-year-old Emily (Natasha Calis), on weekends. Emily still thinks Mommy and Daddy will get back together, but Hannah assures her that it won't happen. After Clyde shows his girls his new house in an unfinished subdivision and feeds them pizza (against Stephanie's wishes), he takes them to a yard sale. Em then finds a wooden box with Hebrew engravings and has her father buy it. Pretty soon after she opens the box that whispers to her, the girl isn't herself, as moths flutter throughout her room and her eyes roll in the back of her head. It can't possibly just be the divorce that's got her down, so of course, the box must be containing a dybbuk, or an evil spirit in Jewish folklore. Don't you hate it when that's the case?

Besides being something of a Judaic variation on 1973's seminal, inimitable "The Exorcist" that rooted its supernatural elements in Catholicism, "The Possession" doesn't offer anything too new in the derivative demonic-possession subgenre. 2009's "The Unborn" actually beat this one to the punch, being about a miscarried dybbuk-twin from the Holocaust, but it was too laughable to give us the willies, so consider the Jewish spin now sold. Screenwriters Juliet Snowden and Stiles White (who both co-wrote 2005's "Boogeyman") do deftly mix possession into the domestic drama, but don't really bring faith into the mix or identify the Brenek clan as Jewish—the dybbuk just wants to prey on innocence and that's that. Do all religious denominations have demons? There are also abandonment issues to account for, like completely dropping the connection to the film's opening involving the box's first owner/host that barely survives, as well as the quick send-off of Stephanie's new man Brett (Grant Show), an orthodontist that makes himself at home in her house, after facing the dybbuk's wrath.

For all the overlapping familiarity in the film's premise, it's not always what it's about but how it's about it. Releasing the film in such a youth-driven market, Danish director Ole Bornedal (of 1997's darkly atmospheric, underrated "Nightwatch") actually takes the time to introduce and develop his characters, and then unfold the supernatural happenings with a restrained, methodical mood that's hard to find in horror films these days. When it comes time for the shock moments, they are simultaneously unnerving and nutso—Emily wolfing down pancakes and then stabbing her father's hand with a fork, fingers emerging from Emily's throat, and a sinister Gollum-like face appearing in an MRI readout. Thankfully, Bornedal never falls back on cheap jump scares.

"The Possession" looks and sounds great, too. Dan Laustsen's cinematography is crisp with a chilly, desaturated color palette and an autumn feel. The sound design is effective, with the scare beats synced up to classically overstated crescendos, courtesy of composer Anton Sanko's banging piano keys, that smash cut to silence. Musical accompaniment can be overly intrusive in horror movies, but it's part of the ominous fun here; some of the dun-dun stings remind of John Williams' "Jaws" score. Also, performances are above par for a film of this genre. Morgan and Sedgwick are quite persuasive as the loving, divorced parents who must set their baggage aside when their daughter needs them most. Calis is excellent as Emily, portraying her as a girl who's deeply affected by her parents' divorce as well as being the host of a hungry demon. For what she has to do when Em is under demonic influence, like gagging, chowing down food like a ravenous predator, and not blinking, she's fully convincing and very much a creepy little devil.

When Clyde brings in a rabbi's son Tzadok (Hasidic reggae/hip-hop artist Matisyahu), the overwrought but exciting climax sets the stage for a big exorcism in the hospital's private physical therapy room. It's these final scenes that not only unleash Bornedal's crazy, off-the-wall bag of tricks, turning up the intensity and the volume, but also lead to some unintended laughs (starting with Tzadok saying "I hate hospitals—people die here"). A strobe-light effect is a nifty touch, offering up a flickering glimpse of the CGI dybbuk. There's a creepy reminder of the director's "Nightwatch" in a dark morgue, with the indelible image of Emily being illuminated only by a red "exit" sign. But when she turns into a white-eyed demon with wind in her hair, it comically feels right out of the "Evil Dead" movies (which is appropriate, considering producer Sam Raimi "presents" this film). Worse, the filmmakers (or was it studio interference?) are at a loss of how to wrap their story up; although they go for one last (predictable) thrill, which turns into an anticlimactic setup for a sequel, a more even-keeled conclusion would've been more satisfying. Capable of standing the test of time as much as that Leslie Nielsen-Linda Blair "Exorcist" spoof "Repossessed," "The Possession" is a near-miss. There's the nagging feeling that it could have been scarier, but at least it's not of the found-footage persuasion or another "torture chic" exercise. This is a minor but worthwhile effort that provides just enough eerie frights without relying on gore and a "beware of garage sales!" moral.