"Perks of Being a Wallflower" timeless, moving, and well-acted coming-of-ager 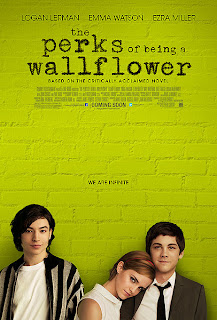 "The Perks of Being a Wallflower" is based on Stephen Chbosky's best-selling 1999 young-adult novel, adapted for the screen by writer-director Chbosky, and it's as much of a lovingly executed and gracefully realized adaptation as one could hope and even more deeply felt coming-of-age teen cinema than John Hughes' wonderfully inspired, insightful works. The film may seem like just another teen movie that chronicles the joys and pains of high school and coming of age, but it covers such themes while striking plenty of hard truths, emotional warmth, and relatability to set itself apart from its cinematic elders that started such a nostalgic staple. Lest one assumes the book's author translating his own material to the screen is a bad idea, we have an instant classic in our midst, and that's no hyperbole.

Set in the Pittsburgh suburbs during the early 1990s, "The Perks of Being a Wallflower" follows introverted Charlie (Logan Lerman), who aspires to be a writer and is writing a letter to an anonymous friend. After his best friend shot himself a few months ago, Charlie nervously makes the transition from middle school to his freshman year in high school. Once he attends the school football game solo, he meets a senior named Patrick (Ezra Miller), the carefree, openly gay class clown, and his stepsister Sam (Emma Watson), a strong-minded, Penn State University-bound young woman who's still figuring herself out, as well as their own circle of friends. "Welcome to the island of misfit toys," Sam says, taking Charlie under their wing and into their clique of cool outsiders. Through thick and thin, they become his support system, and vice versa.

Chbosky has true affection for these memorable characters and it's not difficult to understand why. Even if he remains faithful to his own book, he never makes his adaptation feel precious or like an Afterschool Special, just authentic and from the heart. It certainly helps that, down the line, the actors are all perfectly chosen, beautifully bringing their characters to life. Both sensitive and endearing, Lerman is the film's heart and soul. His voice-over narration is like the epistolary structure of the book and never gets in the way. Having one of her first lead roles after saying farewell to Hermione Granger, a pixie-haired Watson is radiant and instantly appealing as Sam, and doesn't show a trace of her British accent. Being one to watch ever since his unnerving turn in 2008's "Afterschool" and then another chilling performance in last year's "We Need to Talk About Kevin," Miller nearly steals the show, hilariously outspoken and dramatically affecting as Patrick. Though a complete free spirit, he also suffers heartbreak and anger when his closeted lover, a football quarterback (Johnny Simmons), fails to stand up for him. Sometimes it's hard not to care what people think, but Patrick is brave enough to let his freak flag fly.

The standouts don't stop there. Mae Whitman humorously registers as a domineering Buddhist/vegan punk rocker named Mary Elizabeth, and Nina Dobrev has an empathetic turn as Charlie's older sister, Candace, who has her own problems with her boyfriend, Ponytail Derek (Nicholas Braun). Even the adults leave impressions, including Paul Rudd, as Charlie's sympathetic English teacher, Mr. Anderson; Dylan McDermott, as his loving father; and Joan Cusack, as his compassionate doctor, who makes her final line stick like taffy ("We don't have the power to choose where we came from, but we can still choose where we go from there"). Horror make-up artist Tom Savini also amusingly shows up as the school wood-shop teacher. Above all, Melanie Lynskey's flashback appearance, as Charlie's Aunt Helen, hovers over the proceedings like a haunting spirit.

Excluding cell phones and Mac computers but not mix tapes, the '90s period details in the clothing and the music are just right without shoving them down our throats. There's a great sequence with the wallflowers putting on a fun performance of "The Rocky Horror Picture Show" (Patrick naturally playing Dr. Frank-N-Furter) at the local theater; Dexys Midnight Runners' "Come On Eileen" is joyfully used at a dance; and David Bowie's "Heroes" figures into the infiniteness these kids feel when Sam stands in the pick-up of Patrick's truck with her arms in the wind. Even the Pennsylvania milieu is well created, using King's Restaurant, where Charlie meets his friends to eat or study, and the Fort Pitt Tunnel.

At a tight-enough 103 minutes, "The Perks of Being a Wallflower" rings true in its treatment of teen alienation, friendship, sexual identity, suicide, death, love, and personal demons. Given the PG-13 rating, none of these themes feel watered-down. An integral part of the story involves Charlie's troubled Aunt Helen (Lynskey) and comes full circle, moving the film into an unexpectedly dark direction but is eloquently handled without spelling everything out or feeling like a cheap, exploitative gimmick. It's the rare film that touches the viewer deeply, making you wish it could keep going forever, but Chbosky ends things on the perfect, emotionally resonant note. After all, he did write the book. As of late, not since 2011's little-seen "The Myth of the American Sleepover" has a film revolving around teens been so timeless, poetic, exquisitely written, and reverberatingly moving. A sublime labor of love, "The Perks of Being a Wallflower" has enough, yes, perks to be something special.