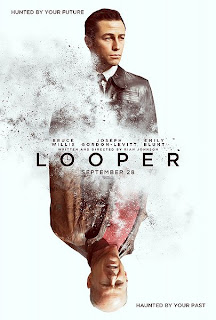 If the cool, perhaps too-cool, 2006 high-school noir "Brick" established anything, it was the beginning of a beautiful friendship between writer-director Rian Johnson (2008's "The Brothers Bloom") and actor Joseph Gordon-Levitt. Johnson's third feature "Looper" may just be the confident, independent-minded storyteller's own "Casablanca," starring one of the hardest working actors of his or any generation. Tricky but not condescending and cerebral but not emotionally cold, "Looper" works on multiple levels: as a brainy piece of science fiction; a brutal, thrillingly sensational action spectacle; an emotional character piece . . . and a superior mind-bender to even "Inception."

Okay, first things first. It's not giving anything away that the advertising hasn't already to say that Gordon-Levitt and Bruce Willis are the same person. Without context, that sounds like something not even suspension of disbelief could solve. And the premise is a real corker, but it can't be boiled down to a Cliffs Notes summary. In a grimy, dystopian Kansas, the present year is 2044. Thirty years from then (2074), time travel will be invented but illegal. A shadowy business, led by a ganster ring and their cryptic boss known as The Rainmaker, goes down: the future's criminal garbage gets taken out by assassins, called "loopers," who await their target's out-of-thin-air arrival with a muzzleloading blunderbuss in hand. These "good" killers receive payment in silver, strapped to the goner's back, and then incinerate the bodies. There's a catch, though: if a looper's future self is sent back as a target, he is forced to do away with him (this is called "closing your loop"), so any trace between employer and employee can be erased.

One of the loopers is Joe (played by a strange-looking Gordon-Levitt), an average Joe with a not so average job. When he's not stationed on the skirts of a cornfield with his ticking pocket watch and shooting a baddie in the chest, he's getting high and spending time with a showgirl (Piper Perabo). But when he sees the horrible fate of fellow looper and friend, Seth (Paul Dano) who failed to close his loop and alerts him that The Rainmaker is closing all loops, will Joe be tough enough to kill his future self (Bruce Willis)? If not, his boss Abe (a sardonic, scene-stealing Jeff Daniels) might have to send his Gat Men after Joe.

After carefully setting up its dense mythology and complicated rules via Gordon-Levitt's efficient noirish narration, "Looper" hits the ground running and doesn't brake to hold your hand or let you dwell on the plot mechanics. (To quote Daniels' Abe: "This time-travel shit fries your brain like an egg." Or, Old Joe, on the topic of time-travel paradoxes: "We're gonna be here all day making diagrams with straws.") Then, there comes a point where Johnson purposefully slows down the pace, without killing narrative momentum, to explore his characters, what's ultimately at stake, and philosophical questions. The second half changes gears for the better when Joe stumbles upon a cane field owned by Sara (Emily Blunt), his past self…just kidding. She's a farm girl, who can handle a gun and chop wood like a lumberjack, and lives with her gifted son, Cid (Pierce Gagnon). And from there—heck, stuff happens.

Influences to "Blade Runner," "The Terminator," "The Matrix," "Firestarter," "Carrie," and then some are certainly there, but Johnson makes it his own, his script and every frame bursting with ingenuity and unpredictability. In a few pivotal moments, Johnson makes some startlingly bold choices that upend expectations and are too rare in most major Hollywood releases. One particular "wow" moment involving Cid, a looper lawman (Garret Dillahunt), and levitation might just cause the hair on one's arms to stand up on end. And if anyone's never seen a movie, the sucker-punch ending will surely seem like a rule-breaker, but what happens still isn't seen coming and remains true to the story.

With blue contacts, a thinned upper lip, and a new nose, the latex make-up on Gordon-Levitt, making him one face with Willis, should take a few minutes getting used to, but it will fascinate most and distract only the attention-challenged set. It worked for Charlize Theron in "Monster," and it works here, too. The combination of facial prosthetics and mimicry is a stunt, but an effectively impressive one. Really, it's a testament to Gordon-Levitt's subtle performance, as he captures Willis' smirk and overall cool without seeming to try. Normally, it would be difficult to side ourselves with a cold-blooded killer and an eye-drop junkie, but Gordon-Levitt makes it even harder not to be invested in this guy's plight. Hey, he's wracked with guilt for giving up Seth, plus he's ambitious enough to study French. Aiding the younger actor is Willis, who not only delivers fun badassery but provides a moving sense of self-loathing. There's one great scene in a diner, where both Joes sit across from each other with steak, eggs, and burnt coffee in front of them. It's so tense and darkly funny, until it erupts into gunshots. Blunt wouldn't sound convincingly cast as a wood-chopping farm girl, but she's very good here, supplying Sara with a pathos and an inner regret. As for Cid, the scarily adorable Gagnon might be the most mesmerizing 5-year-old to act on the big screen (aside from Quvenzhané Wallis).

Without feeling show-offy, Steve Yedlin's cinematography combines the Hollywood mainstream with arthouse cinema, ranging from slo-mo and dizzying tilts to still, intimate shots. Scene to scene and shot to shot, the editing by Bob Ducsay is methodical but quick and sharp, and Nathan Johnson's music score gives every moment an electric charge. There is but one ultra-small issue with the otherwise impeccable production: the silly visual f/x with the hoverbikes.

As with any time-travel movie, loopholes might grow more apparent in the film's knotty design on the drive home. In the moment, the film is pretty airtight in its manipulation; besides, it's more about the experience of the ride than how we got there. Intelligent in its intellect, chilling in its viscera, and lyrical in its culmination of ideas, themes, and plot threads, "Looper" is astounding cinematic nirvana on all planes, no matter past, present, or future.