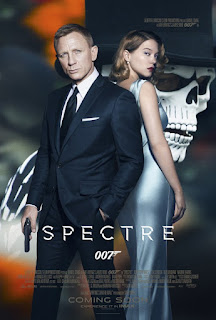 As the paradigm shift of 2006's "Casino Royale" reclaimed the cultural relevance of the British Secret Service ladies' man and remodeled him into a harder, more rugged and internally weary James Bond with Daniel Craig in the tux, 2012's "Skyfall" set the standard for a simultaneously thrilling and substantive Bond outing. It would be a tough act to follow, kind of like how "The Dark Knight Rises" apparently had to live up to the greatness of "The Dark Knight." With that said, however, "Spectre" may not be as game-changing or emotionally charged as its predecessor, but it confirms that the Ian Fleming character hasn't forgotten to be fun and more than delivers on the expectations of a Bond film. The 24th entry in the entire franchise and the fourth (and presumably final) go-round for Daniel Craig as 007, this one satisfyingly fits in line, quality-wise, with "Casino Royale" (while "Quantum of Solace" has almost completely wiped from this writer's memory), and that's nothing to sneeze at.

Director Sam Mendes and screenwriters John Logan and Neal Purvis & Robert Wade and (additionally) Jez Butterworth (2015's "Black Mass") return for the next engagement, setting the film after the tragic loss of MI6 boss M (Judi Dench). Bond carries out M's final order, arriving in Mexico City to stop an assassin's scheme to blow up a stadium during the Day of the Dead festival. Returning to London after going too far in his destruction, Bond is grounded indefinitely from his field operations by the new M (Ralph Fiennes) and bureaucratic underling C (Andrew Scott), who's ready to scrap the 007 program and institute surveillance into the British intelligence. Despite his suspension, Bond naturally disobeys standing down when a video of the late M posthumously orders him to travel to Rome and attend the funeral of the assassin he killed. This leads him to an organization known as Spectre, and once Bond is spotted by Franz Oberhauser (Christoph Waltz), Bond must promise another MI6 fugitive, Mr. White (Jesper Christensen), that he will protect his daughter, Dr. Madeleine Swann (Léa Seydoux).

The most expensive entry in the entire series, being made on a walloping $300-million budget, "Spectre" is considerably the lightest of the Daniel Craig-as-James-Bond series, but that doesn't mean it loses any of its weight. It has all the hallmarks that one seeks in a Bond film, including the gun barrel opening, and a whole lot of cheekiness (i.e. Bond lands on a couch when sliding down the floor of an imploding building and later gives a British man a love tap with his Aston Martin during a car chase). The inky title sequence with Sam Smith singing "Writing's on the Wall" is alternately cool, strangely sensual and haunting with a recurring octopus motif that stands for the SPECTRE organization (Special Executive for Counter-Intelligence, Terrorism, Revenge and Extortion). The globe-trotting plot is often convoluted and business as usual, until it dips into Bond's past and builds to an "a-ha" arc that ties in "Casino Royale, "Quantum of Solace" and "Skyfall." With Sam Mendes still on board, the action filmmaking is on par with "Skyfall," adopting the classic approach of long tracking shots (the opening in Mexico City during a Dia de Muertos parade is just dazzling) and steady camerawork. A fight in and around a helicopter above a crowded Mexican plaza is breathlessly executed, as are chases along Rome's Tiber River and the snowy Austrian mountains, and a wildly brutal, excitingly choreographed drug-out brawl on a moving train with Oberhauser's hulking henchman Mr. Hinx (Dave Bautista). In between, there is also a quietly tense sequence during a well-populated SPECTRE meeting in a boardroom where Oberhauser is strategically kept in the shadows at the head of the table and singles out Bond in the balcony.

Daniel Craig's cool, wounded James Bond is still less of a joker than previous actors in the role, but there is a more playfully deadpan side to him here. Even if the actor has admitted to this being his last time playing the iconic role, he shows no signs of boredom or indifference beyond the world-weariness of Bond. There is red-hot sexual tension between Craig and a strikingly beautiful Monica Bellucci as an assassin's widow, who's actually age-appropriate for Bond, and he creates a relationship worth caring about with Léa Seydoux ("Blue Is the Warmest Color") as Dr. Madeleine Swann. Thankfully, Seydoux treats the role with more strength and complexity than the norm of the "Bond girl." Ben Whishaw, as Q, and Naomie Harris, as Eve Moneypenny, and Ralph Fiennes, as M, reprise their roles and seem to have more prominent involvement than before. Finally, a Bond film is only as strong as its Bond villain, and it's almost surprising Christoph Waltz hasn't already played one. Despite the excellent actor being a great sniveler, his Franz Oberhauser is not as enduring as Javier Bardem's unforgettable Raoul Silva, but Waltz still ranks as the second most notable villain in Daniel Craig's Bond era.

If the first climax is a little anticlimactic, "Spectre" still moves well at 148 minutes and has little time for too much downtime with all of its tautly devised action set-pieces. The film also brings James Bond's entire journey to a perfect culmination of where it was headed all along. Franz Oberhauser has been the puppet master of Bond's pain and, no matter how much one struggles to remember what happened in the previous three films, brings everything full circle, all the way back to the Sean Connery era. Never has a Bond film brought more connective tissue to other installments than this one, to the point that the film revises traditional Bond mythos, potentially dividing purists, and might seem too insular for casual audiences. Though it's hard not to measure "Spectre" against "Skyfall" since these films can't exist in a vacuum, that's even more so the case now. Nevertheless, the 24th Bond is still a lot of fun. "James Bond will return," promises the film's end credits. Even if Craig does not, his final bow out least goes out on a high note.